Take a look at the slot metrics to see if that’s the best choice for you. Labyrinth of Knossos Multijump offers 96.42% return, High dispersion and x4679 win potential, max win. With a quite balanced math and the possibility of the massive swings, the game is always thrilling. Overall, it delivers strong gaming experience.

Labyrinth of Knossos Multijump appeals to those who appreciate gameplay that has both classic and innovative elements to it. If no bonus gets triggered, the base game is still entertaining but as soon as wilds, scatters or other special symbols or features land on the screen, it gets to the whole new level.

The Labyrinth of Knossos MultiJump slot offers 5 reels, 3 rows, and 243 ways to win. To create a winning combination, you need to place 3 or more of the same symbols anywhere on adjacent reels, starting from the far left.

You can join Theseus and go with him to battle the Minotaur on any compatible device, choosing a bet from 0.20 to 60 euros per spin. The Labyrinth of Knossos MultiJump slot variance provides a manual mode, which can be changed to automatic one if you wish. In this case, you will have access to up to 1,000 autospins. The Labyrinth of Knossos RTP is 96.42%, the coincidence rate is 26.24%, and the variance is high. The maximum winnings you can get on a single spin is 4,679x your bet.

Special Symbols of the Labyrinth of Knossos Multijump Slot

MultiJump Multipliers feature – thanks to this feature, you can get increased winnings. Please note that not always but sometimes standard and wild symbols may appear on the panel with the 2x, 3x, or 5x multipliers. If the combination is assembled with a symbol that has a multiplier value, then your winnings will be carried away by it.

The advantage is that if not one but several factors are involved in a combination, their values ​​are multiplied. For example, if the winnings are compiled with the x2 and x3 multiplier, you will receive a win taking into account the combined x6 multiplier. The maximum possible multiplier you can get is 3.125x.

The MultiJump Free Games feature starts when 3, 4, or 5 bonus symbols (ship) appear on the panel in one spin. As a result, you will be awarded 10, 15, or 20 free spins, respectively. During free spins, the MultiJump Multipliers feature gets even better. Since, unlike the main game, here all symbols (even wild ones), but with the exception of the bonus ones, will appear with multipliers attached to them.

As in the main game, all the multipliers involved in the win will be multiplied, bringing you potentially big prizes. The best option would be if the x5 multiplier appears on all five reels. As mentioned above, this will bring the maximum 3,125x multiplier. Plus, you have the chance to get 10, 15, or 20 more free spins if three, four, or five more bonus symbols appear during the feature.

In conclusion, it is safe to say that Labyrinth of Knossos MultiJump is a worthy slot from Dreamtech Gaming that has added to the collection of the Yggdrasil games. 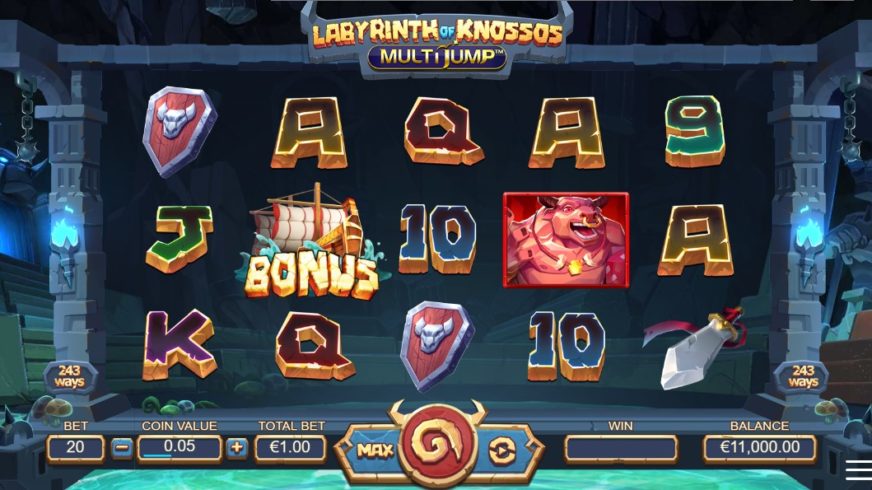 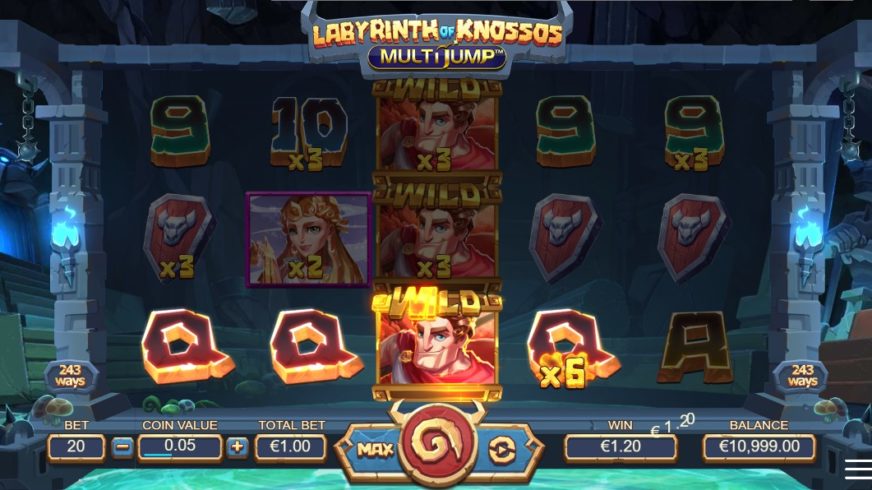 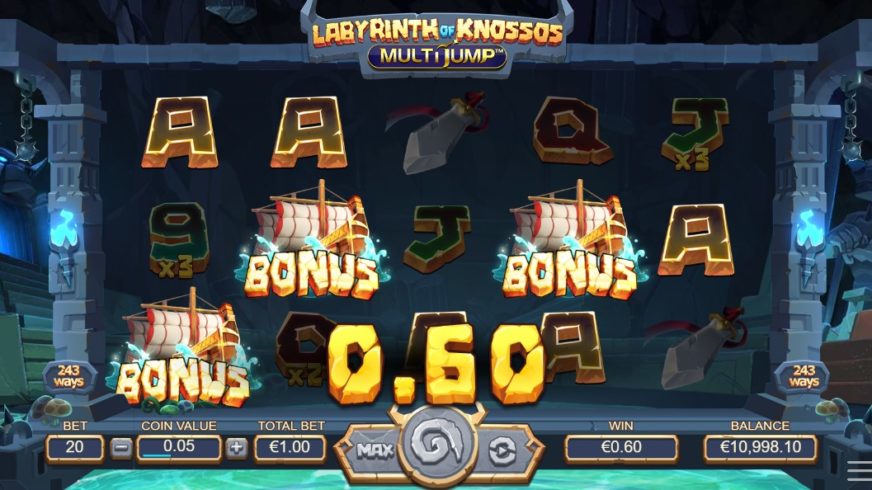 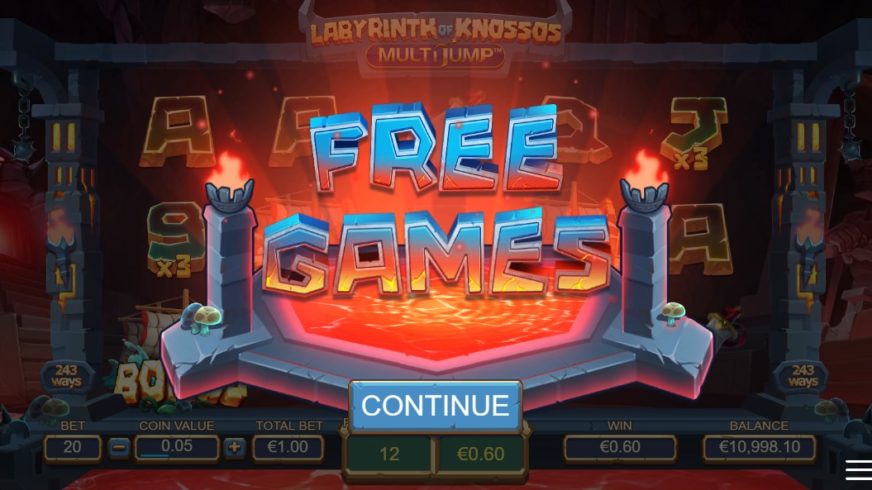 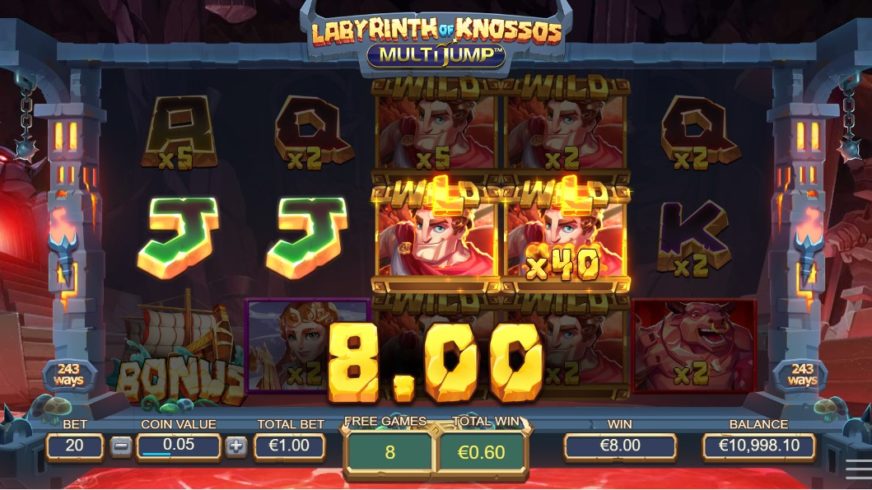 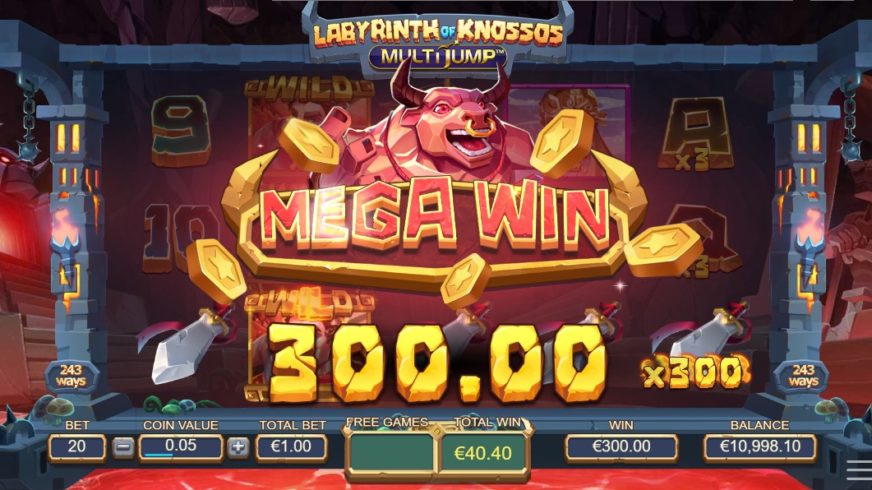 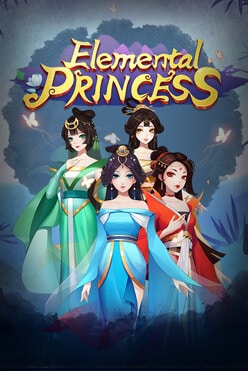 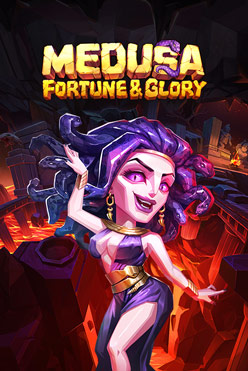