It’s an outstanding company that’s been there for many years. The studio has won numerous awards both for being a great content supplier and an employer. Innovative solutions it produced made an impact on the industry making gambling much more exciting. Quickspin pokies are distributed across many markets and appear in hundreds of casinos.

In 2016 the studio was acquired by Playtech so it’s the part of the big gaming family. Quickspin is a successful slot supplier that doesn’t rest on its laurels and continuously raises the bar. Unlike its parent company, it doesn’t produce roulette or other types of games and focuses entirely on pokies.

The games portfolio consists of different types of slots in terms of themes, features, engines, volatility and return. However, they share one thing in common, which is premium quality and fantastic artwork. Standard payline type slots, all ways win, grid slots, different volatility levels… Quickspin delivered them all.

Quickspin has designed the collection of outstanding video slots and they all deliver unique experiences. The studio doesn’t cut corners and supplies consistently high-quality offerings. It releases on average 1-2 games a month and puts in a lot of hours to create every slot, and it shows.

Having only one progressive jackpot game Quickspin doesn’t attempt to take over this vertical. That’s why some players don’t even know there’s a jackpot game produced by the studio. Dragon Chase is the first and at the time of writing the only title to offer pooled prizes. It features multi tier local jackpot that accumulates within every single operator separately. Three smaller jackpots have fixed values and only the biggest one is progressive. 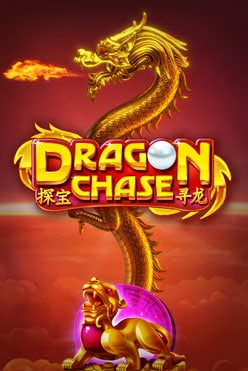 The largest of the jackpots in Dragon Chase is progressive. Money is accumulated due to each wager contributing to the amount. Everyone’s got a chance of hitting the pot, but larger bets give better chances. 1.5% of wagers go towards jackpot accumulation. However, only 1.0% of the bet feed current prize pool and 0.5% is set aside for next jackpots.

After jackpot is landed, the amount resets to 55,000 Euros + 75% of what was collected as the 0.5% contributions. While the other 25% contribute to the later jackpot seed values. This strategy ensures that players have appealing jackpot amount even right after the last one was hit.

Quickspin introduced 3D software into its development processes in 2020. Since then it hasn’t completely transitioned to 3D, and uses it occasionally. Nero’s Fortune was the first 3D slot game by Quickspin and the result was fantastic providing incredible atmosphere and bold, realistic graphics. The series continued with the release of Crown of Valor, which is another beautiful slot.

No matter what engine the studio uses, 2D or 3D, its artwork is never flat and boring as Quickspin skillfully uses any software to get the most out of it.

Old school and primitive pokies aren’t about Quickspin. However, the studio does produce fruit machines that display similarity with classic arcades. Sevens High features classic symbols such as fruits, bells, sevens and stars and the atmosphere is quite classy. But features wise this slot is much more advanced as it has bonus games and modifiers.

Games offers RTP that is usually between 96% and 97%, which is normally expected by both casual and savvy gamblers. But as volatility varies from low to extreme, payouts are spread differently even though RTPs are within a very tight range. So, you might want to play free Quickspin pokies first to see if hit frequency and gameplay are to your liking.

With the release of Titan Thunder the company introduced adjustable RTP. There are two game versions: one features 94.18% RTP and the other one – 96.25%. The information on the theoretical payout information is presented in the game rules. Quickspin deserves some praise for publicly announcing their transition to variable RTP.

The studio has also introduced some feature buy titles that typically offer higher RTP when players pay to trigger bonus rounds. For instance, Crown of Valor return increases by 0.32% up to 96.48% when you pay for a bonus.

Many of the studio’s titles are well familiar to gamblers, but some enjoy massive success.

Demo mode is available on all Quickspin slots in NZ and globally and gamblers can enjoy games for free. For testing you can go to any licensed casino site or official Quickspin site. Pokies produced by the studio are also available on ClashofSlots.com.

Those who think it’s time to take a risk will find plenty of casino choices. This is when variable RTP should be taken into consideration. Some titles have multiple versions that feature different RTP.

Having around 100 people the studio releases on average 1-2 new games every month. This rather small number of releases relative to the size of the company can be explained by the consistently high quality standards. Quality is obviously what matters for Quickspin.

Gaming sites providing services in New Zealand and across the globe offer Quickspin content and for players a large number of casinos means that compromising on anything won’t be necessary. But mind the fact that some slots have two versions and operators with higher RTP settings are obviously preferable.

Out of more than 70 titles only few can’t be played on mobile devices. The rest of the collection is available for gamblers on the go. The gameplay and everything else is the same regardless of the device. However, there’ll be a slight difference in game controls between desktop and mobile. These differences are explained in the game file.

Cross platform HTML5 language is the solution to the problem studios faced some time back, which is the need to design variety of versions for different devices and platforms. Today it’s possible to load the same game version in a browser.

No concerns should be raised about the software as it’s safe and fair. The company complies with regulations in two strict jurisdictions, Malta and UK. They are famous for taking measures to ensure fair gambling. As part of the requirements, games get tested and certified by specialized laboratories adding another layer of protection.

Amazing slots portfolio and a set of promo tools make Quickspin one of top game suppliers. It doesn’t produce large numbers and gives a lot of thought to each of its games. The studio has some timeless hits that every savvy slot fan knows, and the selection as the whole is of the highest level. The software is certified for and distributed to many markets across the globe, including New Zealand.

The company doesn’t receive a lot of criticism as it delivers fantastic titles and acts responsibly. The only thing that can be mentioned is the adjustable RTP strategy that was adopted recently. However, it’s fair to mention that Quickspin was open about its transition to adjustable RTP unlike majority of its competitors that keep it a secret from players. So even though it’s an unfortunate turn of events for gamblers, we should give credit to Quickspin for managing it the right way.

As a top tier provider it’s at the forefront of the slot developments. It has a proven record of highest standard slots and innovative solutions in slots. Promo tools boost engagement and make gambling a little adventure. It’s definitely worth giving free Quickspin slots a try if you haven’t done that yet.

FAQs
What Types Of Quickspin Pokies Are There?
The portfolio consists of slots built on different engines such as traditional lines, grids, Megaways, all ways. Games feature a different mix of bonus options and variety of volatility levels.
What Are The Best Quickspin Pokies By Payout Percentage?
The biggest star in the portfolio just happens to be the most generous one. Big Bad Wolf and its Christmas version both offer amazing 97.34% RTP. There are few other slots that theoretically pay over 97%.
What Are The Most Popular Quickspin Slots?
Big Bad Wolf is obviously the top performing title. It is followed by variety of hits such as Sakura Fortune.
Is It Possible To Play Quickspin Slots On A Mobile Device?
In 2014 the company transitioned to HTML5. Since then it has all the releases available on mobile devices. Moreover, most of its old titles were also converted to this new format so that they too are accessible for mobile users.
Are Quickspin Slots Safe?
Absolutely, the company has high standards and must provide secure and fair gambling according to license requirements. Every title is tested by special laboratories to ensure integrity.