For the provider of this status Santa vs Rudolf is a wonderful release that’s made it to the lobbies of numerous operators. Santa vs Rudolf hit the market on 27.11.2019 offering exciting gameplay and great graphics. You can enjoy free Santa vs Rudolf test mode on our site as a visitor with no sign up required.

Check out the slot metrics to decide if that’s the best option for you. Santa vs Rudolf offers 96.35% theoretical return, High risk level and x1000 win potential, max win. With a pretty balanced math model and the possibility of the massive swings, the game is always engaging. Overall, it provides powerful gaming experience.

Santa vs Rudolf caters to those who love gameplay that has both traditional and experimental elements to it. If no bonus gets activated, the base game is still entertaining but once wilds, scatters or other special symbols or features appear on the reels, it gets to the whole new level.

Santa vs Rudolf is a slot dedicated to the upcoming Christmas holiday from the NetEnt developers.

Whether it’s Easter, Halloween or Christmas – any holiday in fact, slot developers have a great reason to capitalize on their existing games by simply upgrading them and presenting as something new. In fact, NetEnt has never released original Christmas slots. For example, they released a Christmas version of the Secrets of the Stones slot and called it Secrets of Christmas in 2016.

A festive version of the already existing EggOMatic slot was released in 2018, with a modified theme and titled Jingle Spin. Now, before the upcoming Christmas holiday, they decided to upgrade another slot called The Invisible Man, which was released in 2014 – as a result, we got a Christmas version called Santa vs Rudolf.

The Santa vs Rudolf slot is visually completely in line with the Christmas theme. As soon as you launch the Santa vs Rudolf slot, you will immediately find yourself at the North Pole, where Santa Claus prepares his gifts for children amid trees and snow. Great, isn’t it? A slight problem is that Rudolph the reindeer decides to play and hide Santa’s hat. Santa becomes mad and gets into a fight with Rudolph when they collide on the reels. If you’ve played The Invisible Man slot, then you probably know what to expect from Santa vs Rudolf on a technical part.

You will find a 5×3 playing field and 20 paylines; symbols include Christmas paraphernalia: card names from 10 to A in the form of lollipops, wish lists, snow balls with a reindeer, Rudolph’s collar, gifts and the famous Santa Claus sleigh. There are two wild symbols in the Santa vs Rudolph, they look like Santa and Rudolph and trigger interesting features.

Wild Re-Spins: the wild Rudolph symbol can appear on any spin, but only on reel 1. It moves one position to the right, replacing all symbols on its way until it leaves the playing field. Santa works in the same way, but it appears on reel 5 and moves one position to the left, replacing all symbols in its way, until it leaves the game screen.

The mechanism of triggering free spins is quite interesting and non-standard in this slot. If Santa and his reindeer Rudolph appear in the same row, they clash and start a fight, after which 10 free spins are activated. Please note that you can increase this number. If Santa and Rudolph clash in all rows at once at the start, this can bring you a maximum of 30 free spins. Wild symbols appear much more often during free spins, and whenever two warring parties clash, 4 more spins are added to your total.

Moreover, you will see two counters above the reels during the free spins, each corresponding to a specific wild symbol. When wild Santa or Rudolph symbols leave the reels, they fill one cell on their counter. Both counters have eight bars, and if you fill one of them completely before the feature ends, you activate the corresponding bonus round. Here’s what you can expect:

Santa’s Gifts is the less attractive of the two bonuses. Basically, you get a Pick Me-style bonus feature, divided into three stages. You need to pick items, behind which there are cash prizes, a multiplier increase, or a Santa hat that ends the round.

Rudolf Spins feature is the key to winning big in this slot. You will get 3 spins with 5 wild Rudolph symbols randomly added to the reels on each spin.

In conclusion, it can be said that despite its resemblance to The Invisible Man, Santa vs Rudolf turned out to be a funny and interesting slot that is perfect for playing during the Christmas holidays. 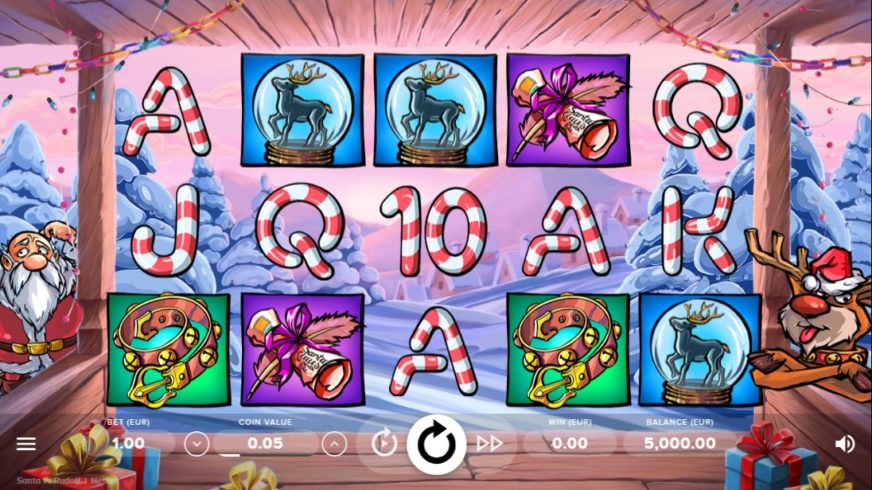 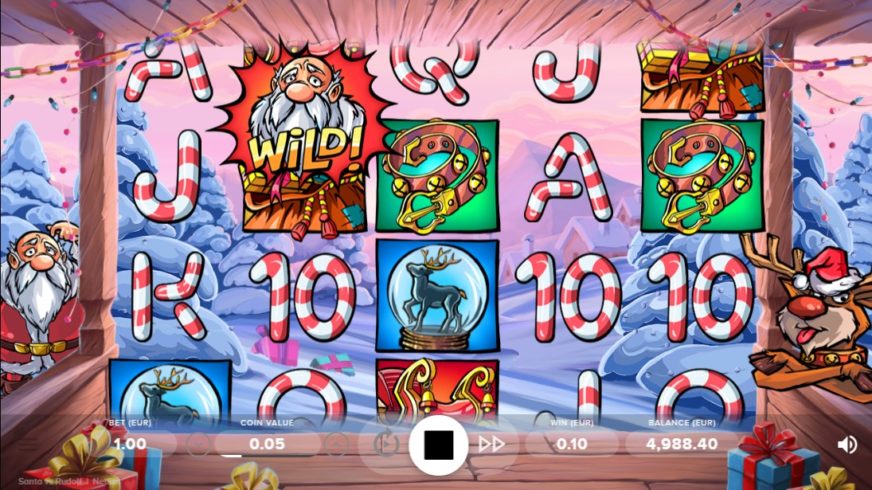 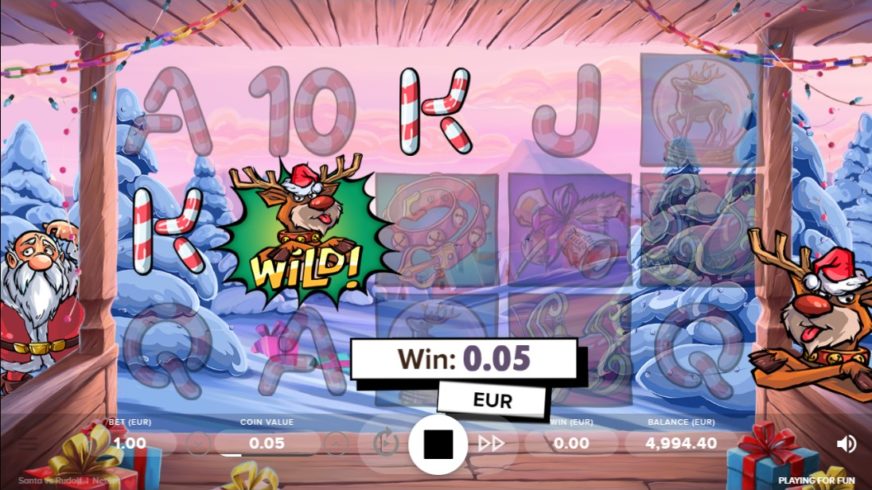 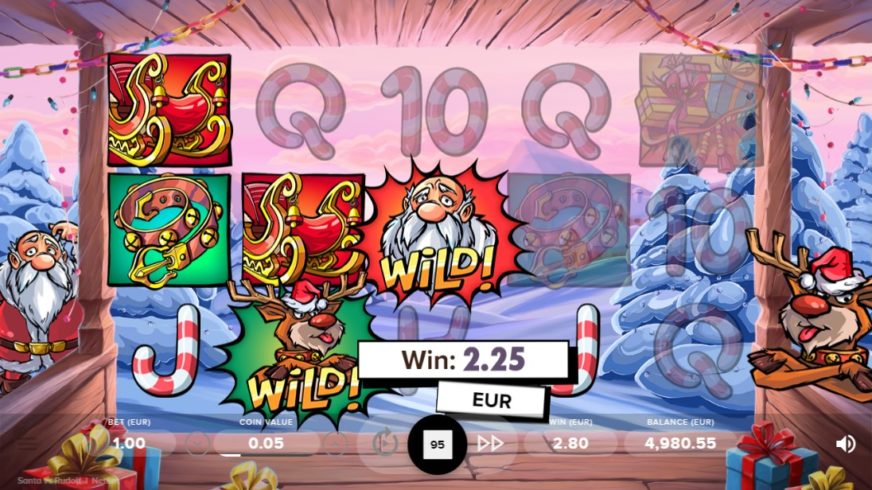 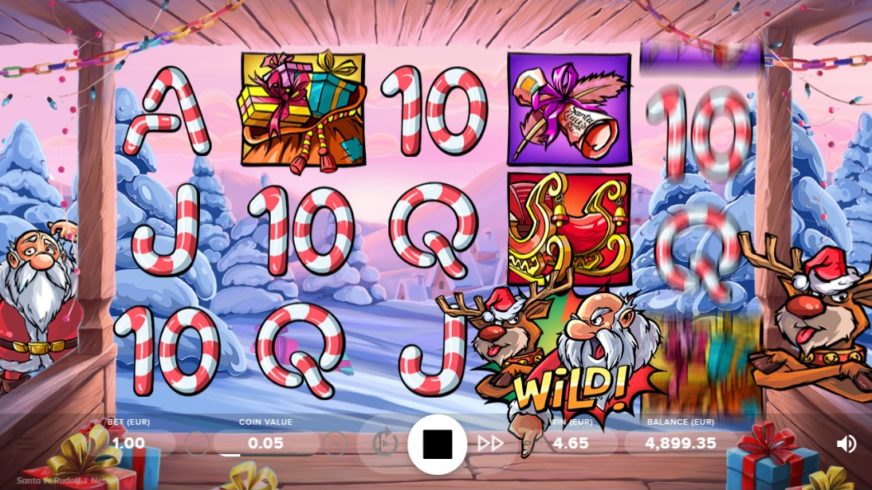 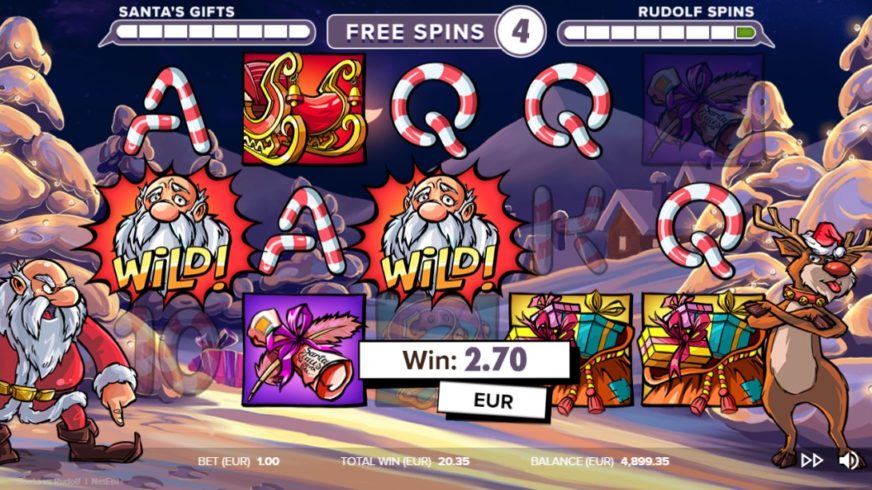 Santa vs Rudolf Reviews by Players