For the provider of this status Peking Luck is a remarkable launch that’s made it to the lobbies of many gambling sites. Peking Luck hit the market on 30.07.2018 offering exciting gameplay and high-quality visuals. You can enjoy free Peking Luck demo mode on clashofslots.com as a guest with no registration required.

Take a look at the slot metrics to decide if that’s the greatest option for you. Peking Luck offers 96.50% RTP, High dispersion and x180000 win potential, max win. With a quite balanced math and the possibility of the considerable swings, the game is always thrilling. Overall, it provides strong gaming experience.

Peking Luck appeals to those who appreciate gameplay that has both traditional and innovative elements to it. When no bonus gets triggered, the base mode is still interesting but as soon as wilds, scatters or other special symbols or features land on the reels, it gets to the whole new level.

The Peking Luck slot has a colorful theme inspired by a traditional Chinese festival. Technically, the game has a structure of 3×5 reels and 25 paylines with the minimum bet of $0.25 to $125 per spin. The main symbol of the game is a mysterious girl with a pink fan. She replaces any cell symbol, and also doubles the earned winnings. There is also a free spin feature, where you can get from eight to 38 free spins with the additional multiplier of up to 18x.

The design of the Peking Luck slot looks just great. The game screen is set against the flowering Sakura trees. On the reels, you will see the symbols that found at any Chinese festival. Golden tambourines, a fan, a drum, a dragon, and a traditional mask are symbols of the upper value. Cheaper symbols include standard playing cards found in many slots. The wild symbol looks like a mysterious girl with a rose fan. The scatter symbol is a golden gong with the inscription free spin. Three symbols activate an additional bonus game.

The free spin feature is activated when at least three scatter symbols appear. The latter will also bring you an additional winning of up to 250x of your initial bet. After that, you will go to the base bonus game consisting of two stages. At the first one you need to choose one of six different colored fans, each of which hides a certain number of free spins. You can get from eight to 38 free spins. At the second stage, you need to choose one of six dragons that will determine an additional multiplier from 2s to 18x of the winning combination.

Besides, the repeated scatter symbols appearing during free spins will reactivate the first stage and will allow you to get additional spins. In addition, the wild symbol will be combined with an additional multiplier and will double the winning combination. 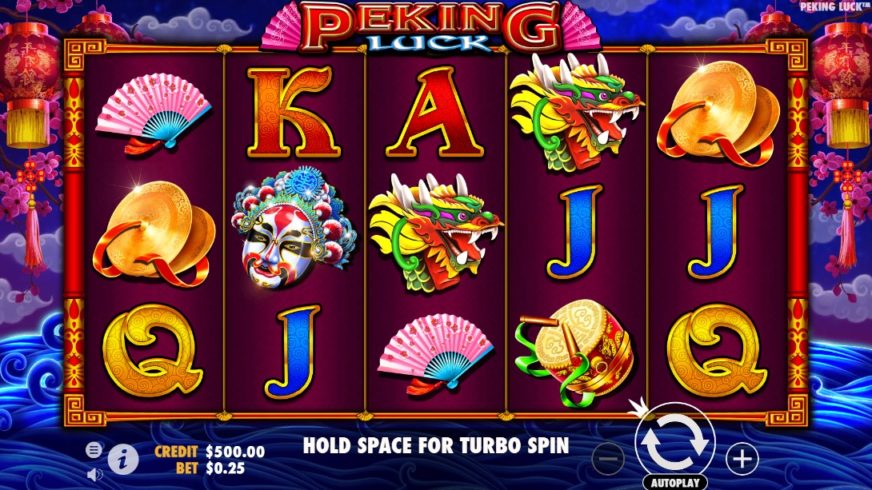 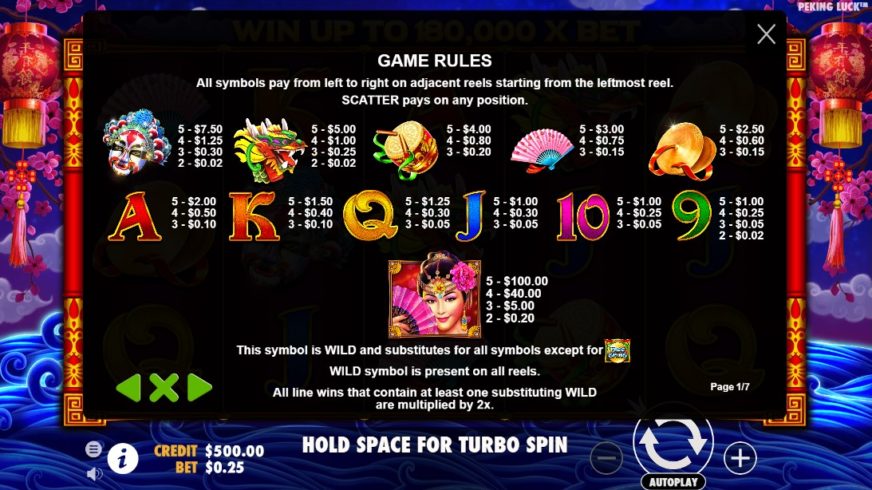 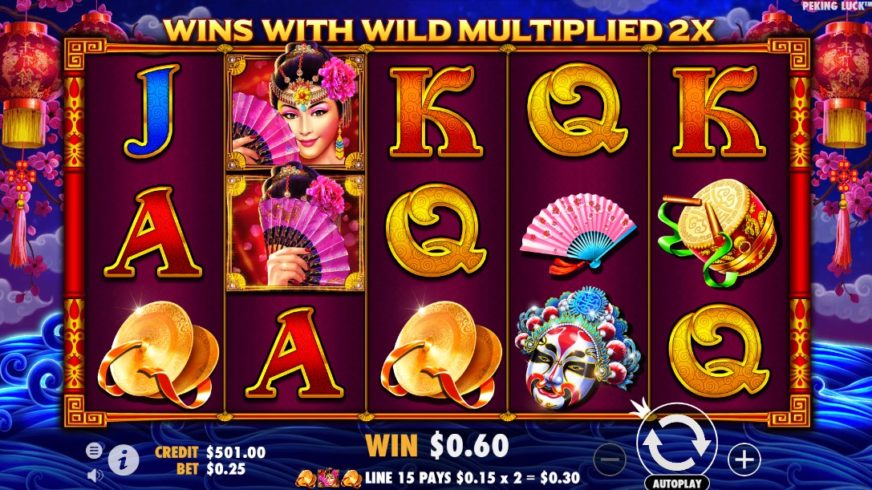 Can I play Peking Luck free slot?
Yes, clashofslots.com is the place to test Peking Luck with no sign up required. Any gambling site partnering with Pragmatic Play would also provide free access to the test mode.
Can I win real money on Peking Luck slot?
Yes, registered account with a gambling site would be the only option to enjoy real money Peking Luck and get real winnings.
What is the best place to play Peking Luck?
When it comes to test mode any trusted gambling operator or casino related site such as clashofslots.com would be fine. Once real money gets involved licensed operator with good reputation and premium services must be selected. Best casino would vary depending on one`s personal preferences.
Can I play Peking Luck slot on mobile phone?
Yes, this title is mobile optimized and can be loaded on any device.
How to win playing Peking Luck?
This is a certified online slot that generates random results, and all you need is a good fortune. Check the paytable to see how and how much you can win.