For the studio of this caliber Gem Rocks is a wonderful game that’s made it to the lobbies of a number of operators. Gem Rocks was released on 22.02.2018 offering popular gameplay and superior graphics. You can play free Gem Rocks demo mode on Clash of Slots as a guest with no registration required.

Take a look at the game metrics to decide if that’s the best option for you. Gem Rocks offers 96.2% RTP, High dispersion and x9217 win potential, max win. With a pretty balanced math and the possibility of the big swings, the game is always engaging. Overall, it provides enjoyable gaming experience.

Gem Rocks appeals to those who appreciate gameplay that has both classic and experimental elements to it. If no feature gets activated, the base game is still interesting but once wilds, scatters or other special symbols or features land on the reels, it gets to the whole new level.

Visually Gem Rocks looks amazing, like all slots from Yggdrasil Gaming. The game reels are set in a world of gems and magnanimous giants! You will find symbols of various stones with precious inserts on the reels. All symbols are stone blocks of different colors and contain different shapes – a star, a crescent moon, a circle, a blue triangle, a gray triangle, a square, a rhombus, and an orange cross. The highest pay symbol is a red stone with a gold star; it can fetch up to 200 game coins for 6 identical symbols.

The main feature is Gem Rock, it starts when successive combinations are dropped. When activated, a stone monster appears on the screen, which takes the form of one dropped symbol and complements the winning combination. The more consecutive combinations the more gem rock cells.

The bonus feature is completely related to the gameplay in Gem Rocks and is called Dropdown Wins. It is active throughout the game. Every time you collect a winning combination, the matched symbols disappear and are filled with new symbols, thus giving you an additional chance to trigger the gem rock feature. 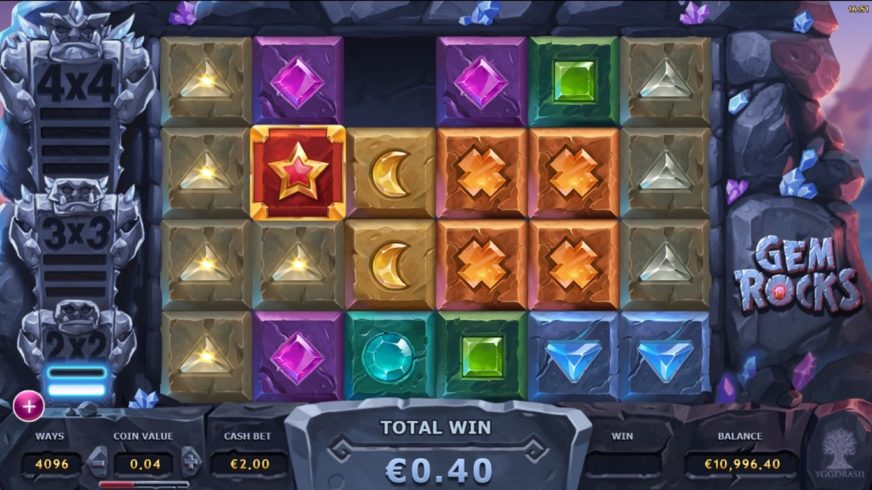 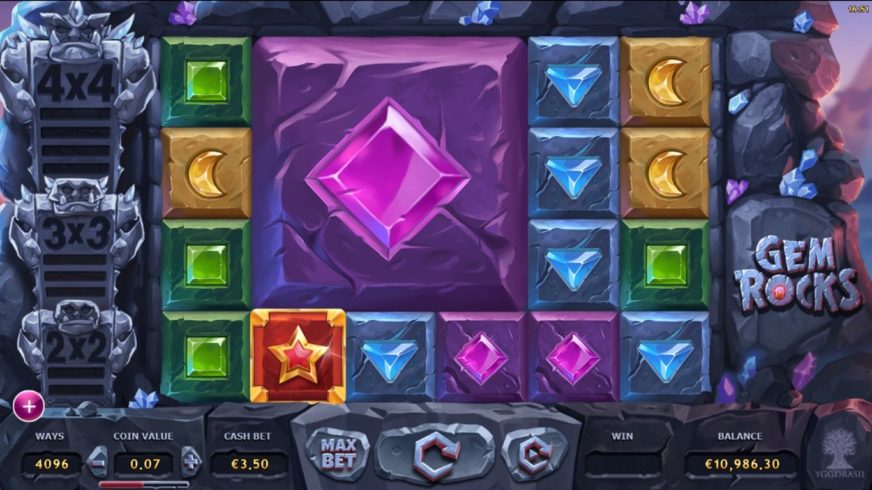 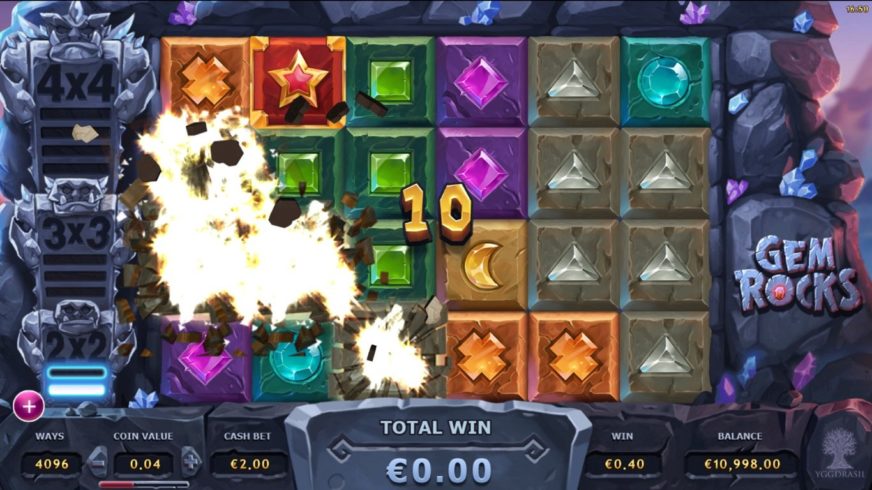 Can I play Gem Rocks for free?
Yes, Clash of Slots is the place to try Gem Rocks with no registration required. Any gambling site partnering with Yggdrasil Gaming would also give free access to the test mode.
Can I win real money on Gem Rocks slot?
Yes, registered account with a gambling site would be the only option to enjoy real money Gem Rocks and get real winnings.
What is the best place to play Gem Rocks?
When it comes to demo mode any trusted gambling operator or casino related site such as Clash of Slots would be fine. Once real money gets invested legitimate operator with good reputation and excellent services must be selected. Best casino would vary depending on one`s personal requirements.
Can I play Gem Rocks slot on mobile phone?
Yes, this slot is mobile friendly and can be loaded on any device.
How to win playing Gem Rocks?
This is a licensed video slot that generates random results, and all you need is a good fortune. Check the paytable to learn how and how much you can win.