For the supplier of this level Hanzo’s Dojo is a remarkable game that’s made it to the lobbies of numerous casinos. Hanzo’s Dojo was released on 23.08.2018 offering exciting gameplay and superior graphics. You can enjoy free Hanzo’s Dojo demo mode on clashofslots.com as a visitor with no registration required.

Take a look at the game metrics to decide if that’s the best choice for you. Hanzo’s Dojo offers 96.1% return, Average volatility and x2536 win potential, max win. With a quite balanced math model and the possibility of the massive swings, the game is always engaging. Overall, it provides strong gaming experience.

Hanzo’s Dojo caters to those who love gameplay that has both conventional and unique elements to it. When no feature gets triggered, the base game is still interesting but once wilds, scatters or other special symbols or features show up on the screen, it gets to the whole new level.

Hanzo’s Dojo is another novelty from Yggdrasil Gaming; the game is played on any device with a minimum bet of $0.25 per spin. Technically, the slot has a standard game structure, five reels, and 25 paylines. By playing it, you find yourself in Japan where the famous Hattori Hanzo tournament takes place, which gathers the strongest fighters of various martial arts. In addition, the game has two free spins options: Colossal Symbols and Expanding Wild reels. At the top of the game screen, you will see an additional panel with three cells; various complementary symbols will drop out in them, which will allow you to activate one of the unique features.

The design of the Hanzo’s Dojo slot is fully consistent with the chosen theme; you find yourself in the land of the rising sun and visit the famous Hattori Hanzo fighting tournament. On the reels, you will see playing cards with icons of bonsai, tsuru crabs, winds, and big waves. In addition, the higher pay symbols are representatives of various martial arts: Sumo, Samurai, Ninja, and Mercenaries, who fight for the title of the winner. The wild symbol is the slot logo in the form of a golden soldier.

The Colossal Symbols feature is activated when three identical symbols match in the mini-game screen, which is located on the top of the main one. You will receive one extra spin, where the entire central part of the game screen of 3×3 symbols will have a huge symbol value.

In general, Hanzo’s Dojo turned out to be a rather interesting slot with interesting themes and stunning graphics. Thanks to the Colossal Symbol feature, the potential for big winnings is quite high, you can get up to x2100 of your original bet with every free spin. 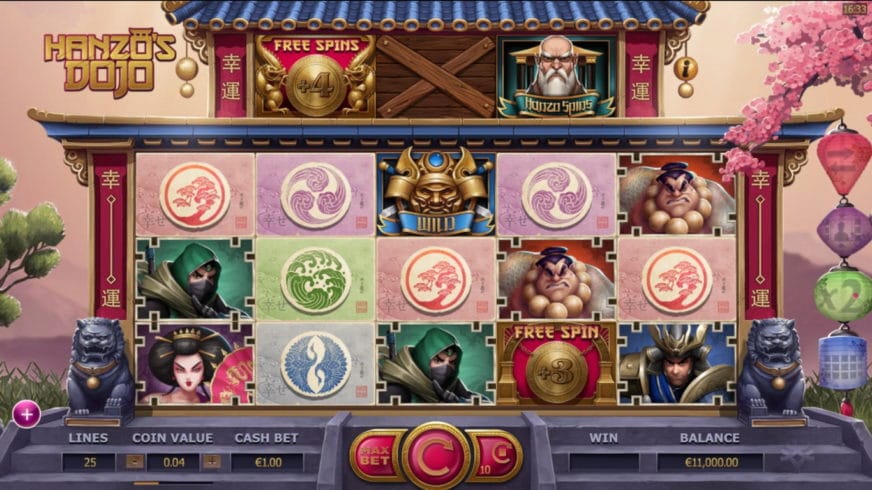 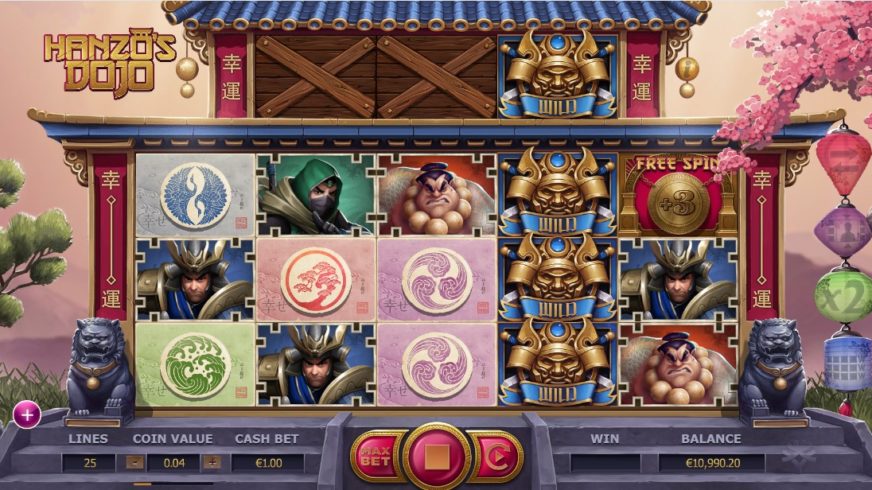 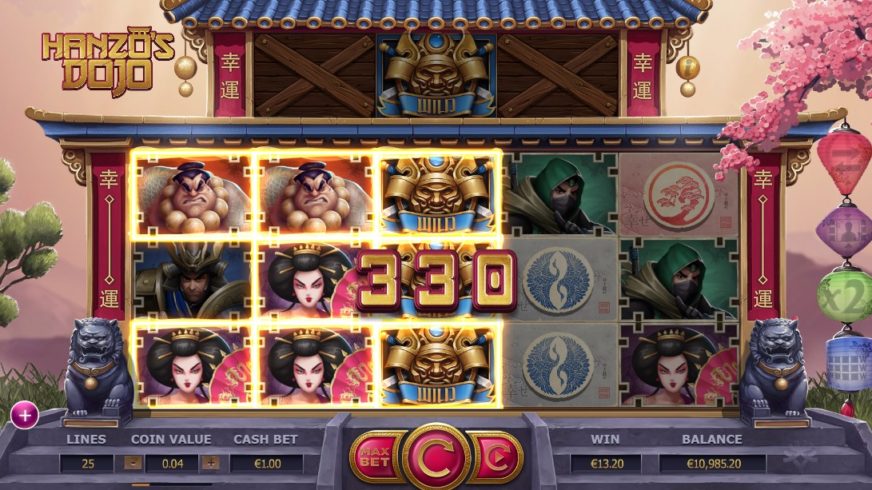 Can I play Hanzo’s Dojo free slot?
Yes, our site is the place to test Hanzo’s Dojo with no sign up required. Any gambling site partnering with Yggdrasil Gaming would also offer free access to the demo mode.
Can I win real money on Hanzo’s Dojo slot?
Yes, registered account with a gambling site would be the only option to play real money Hanzo’s Dojo and land real winnings.
What is the best place to play Hanzo’s Dojo?
When it comes to free play any trusted casino or casino related site such as clashofslots.com would be fine. Once real cash gets invested legitimate operator with solid reputation and top tier services must be selected. Best option would vary depending on one`s personal requirements.
Can I play Hanzo’s Dojo slot on mobile phone?
Yes, this title is mobile optimized and can be loaded on any device.
How to win playing Hanzo’s Dojo?
This is a licensed title that generates random results, and all you need is a good luck. Check the paytable to learn how and how much you can win.