For the supplier of this status Ice and Fire is a great release that’s made it to the lobbies of a number of gambling sites. Ice and Fire was launched on 06.02.2020 offering exciting gameplay and high-quality visuals. You can enjoy free Ice and Fire demo mode on clashofslots.com as a guest with no registration required.

Check out the slot metrics to see if that’s the best option for you. Ice and Fire offers 96.64% RTP, High risk level and x19139 win potential, max win. With a pretty balanced math model and the possibility of the massive swings, the game is always engaging. Overall, it provides enjoyable gaming experience.

Ice and Fire caters to those who love gameplay that has both conventional and innovative elements to it. If no feature gets activated, the base mode is still entertaining but once wilds, scatters or other special symbols or features land on the reels, it gets to the whole new level.

Dreamtech Gaming, owned by the Maltese company Nebula Gaming, is a software development studio with Asian roots founded in 2017 and the latest independent studio, which joined the YGS Masters Yggdrasil platform. You will learn what happened thanks to such a cooperation by reading our review.

As soon as you open the Ice and Fire slot, the first thing that catches your eye is the unusual format of the panel. The fact is that this time the main game actions of the Ice and Fire slot will take place on a huge field, which provides for 10 game reels divided into two parts.

The first part refers to ice and provides for 5 reels and 60 lines, the second part refers to the fire and also provides for five reels and 60 lines, bringing the total number of lines to 120. As a result of the fact that the panel is divided into two areas, you will find two sets of symbols (its own for each area). A total of 20 symbols await you, among which 10 refer to the ice area and the same number to the fire area.

On the first area (ice), card names from 10 to A in blue will appear, as well as a ring, an owl, a tiger, a dragon, and an ice queen. On the second area (fire), card names from 10 to A of orange color will also appear, as well as a magic ball, horse, wolf, dragon, and queen of fire. In addition to the standard symbols, special ones are waiting for you, which are the same for two areas. The wild symbol (magic book) is used to replace simple images in the game, and the scatter symbol (dragon’s egg) activates the free spins round.

Bonus Features of the Ice and Fire Slot

The first feature that awaits you in the Ice and Fire slot is CASCADING SYMBOLS. Its meaning is that all the images that participated in the formation of the winning combination are removed from the panel, and new symbols appear in their place. This process continues as long as you manage to get winnings, and thanks to it, you can get more prizes in one spin.

The Shared Wilds feature is the next feature of the Ice and Fire slot. Its meaning lies in the fact that both panels have one wild symbol (magic book), and if it falls on one of the areas, you will see how wild is duplicated in the same position on another area, except for the case when a scatter appears in this position.

The Free Games feature is the third feature that awaits you in the Ice and Fire slot. It activates when you get four consecutive combinations. Then you have to choose an ice or fire dragon, which will bring you 8, 10, or 15 free spins with added 100 or 150 additional wilds.

The last feature that awaits you in the Ice and Fire slot is related to the scatter symbol and is called the Multiplier feature. In order to see it in action, you need to catch three or more scatter symbols all over the panel. Three scatters give 10 free spins, and each additional one will bring 5 more spins. During this round, additional wild symbols are added, but even better is the introduction of a multiplier. It starts at x1 and increases by one after each win.

In conclusion, it is safe to say that Ice and Fire is a decent slot with a popular dragon theme, playing which you will have a great time, and you can also earn good prizes.

Ice and Fire Symbols and Paytable 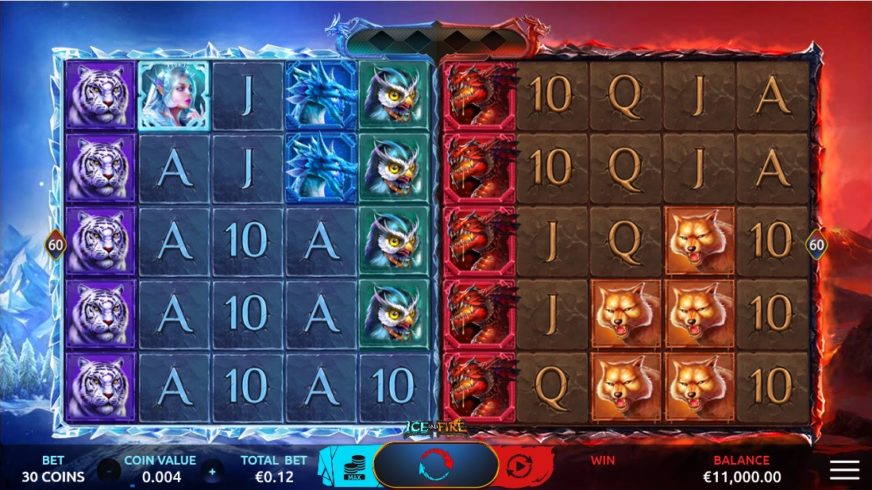 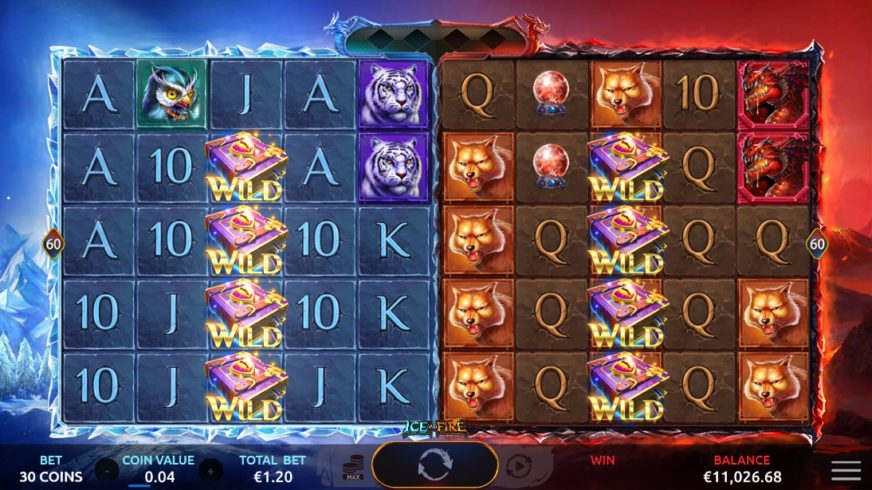 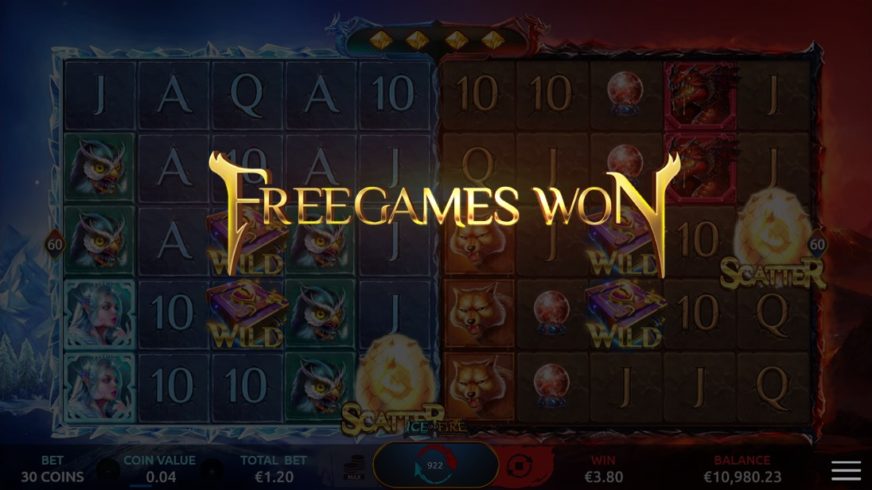 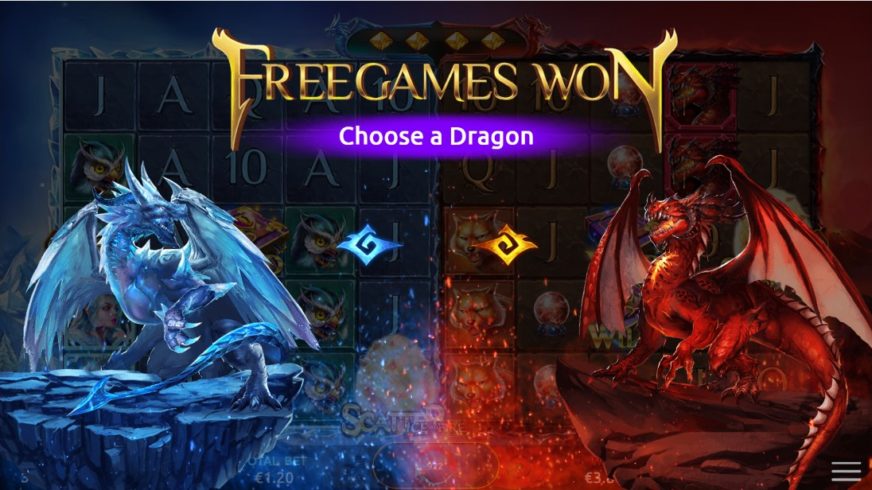 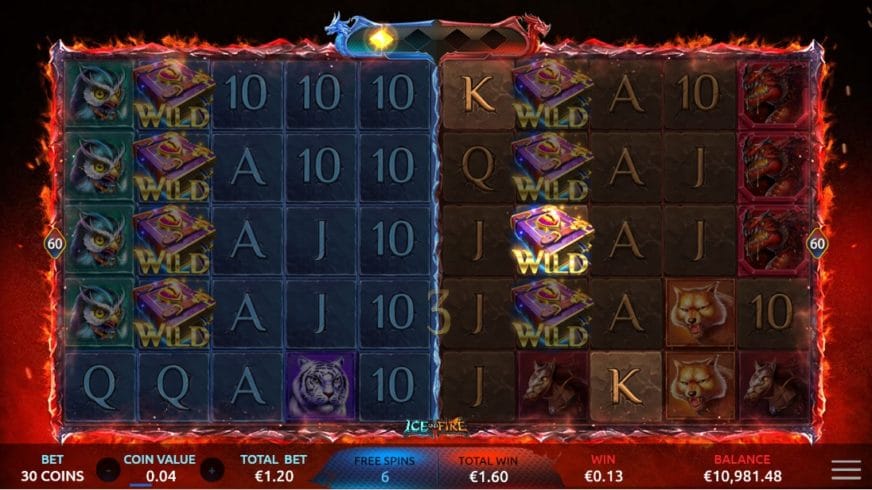 Can I play Ice and Fire for free?
Yes, clashofslots.com is the place to test Ice and Fire with no registration required. Any gambling site partnering with Yggdrasil Gaming would also give free access to the test mode.
Can I win real money on Ice and Fire slot?
Yes, registered account with a gambling site would be the only option to enjoy real money Ice and Fire and get real winnings.
What is the best place to play Ice and Fire?
When it comes to demo mode any trusted gambling operator or casino related site such as clashofslots.com would be fine. Once real money gets invested legitimate operator with good reputation and premium services must be selected. Best option would vary depending on one`s personal requirements.
Can I play Ice and Fire slot on mobile phone?
Yes, this game is mobile optimized and can be loaded on any device.
How to win playing Ice and Fire?
This is a certified video slot that generates random outcomes, and all you need is a good fortune. Check the paytable to learn how and how much you can win.

Ice and Fire Reviews by Players