Aus Dem Tal is the game developed by renowned studio Endorphina. Released on 20.02.2020 it became popular among slot fans for its exciting engine and fantastic artwork. This review explains all of its key characteristics that along with free test mode available on our site give a complete idea of experience you’ll be getting.

Playing the Aus Dem Tal slot, you will visit the mine located deep underground in the company of the miner and his faithful companion – the mouse. If you get lucky, valuable rewards won’t keep you waiting.

On the technical part, the Aus Dem Tal slot is equipped with 5 reels and 20 lines where your winnings will be formed. All symbols in the slot play from three images, which means that you have to catch from 3 to 5 matching symbols on one line from left to right, starting from the outer reel to get a win.

Aus Dem Tal is a slot filled with colorful symbols that will allow you to feel real adventures in a mine full of dangerous routes. You will see a fearless miner, a gnome, as well as its little assistant, a mouse, their mining equipment and, of course, what they are looking for – gems on the reels.

You need to choose the number of active lines in order to start playing, although it is probably best to always have all 20 lines active. The level of bets ranges from 0.20 to 200 euros per spin. Don’t forget that the Aus Dem Tal slot can be played on any compatible device in both manual and automatic mode.

A Free Spins feature is triggered when 3 scatter symbols appear on the playing field, after which you will get access to 12 free spins. The Free Spins feature comes with stacked wilds that increase your chances of winning and offer higher payouts. You can also restart the feature if the scatter lands again during the free spins.

You will also have a chance to increase any winnings during the risk game. This can be done by pressing the desired button after a paying combination. After this, you will have to choose one of the cards. Your winnings will double, if the selected card is higher than the one chosen by the dealer.

In conclusion, it must be stated that Aus Dem Tal is a high-quality slot with nice graphics, which will let you have fun and get good prizes. 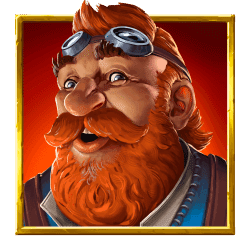 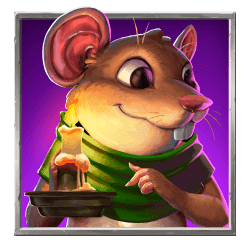 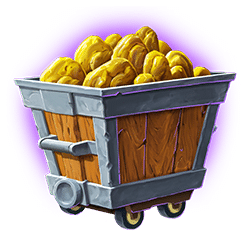 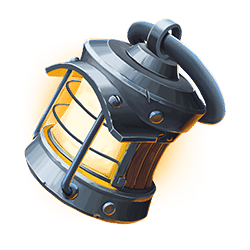 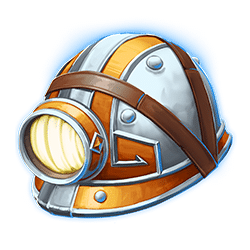 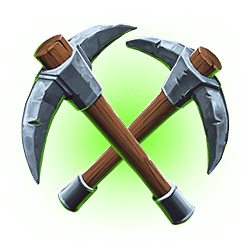 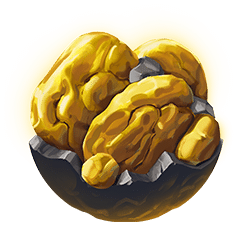 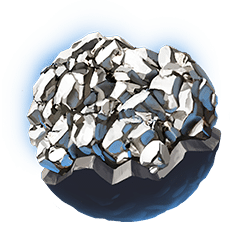 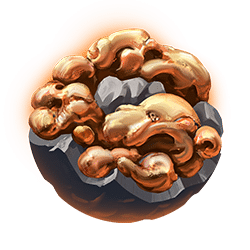 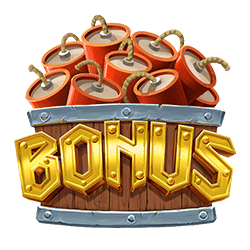 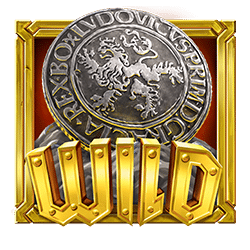 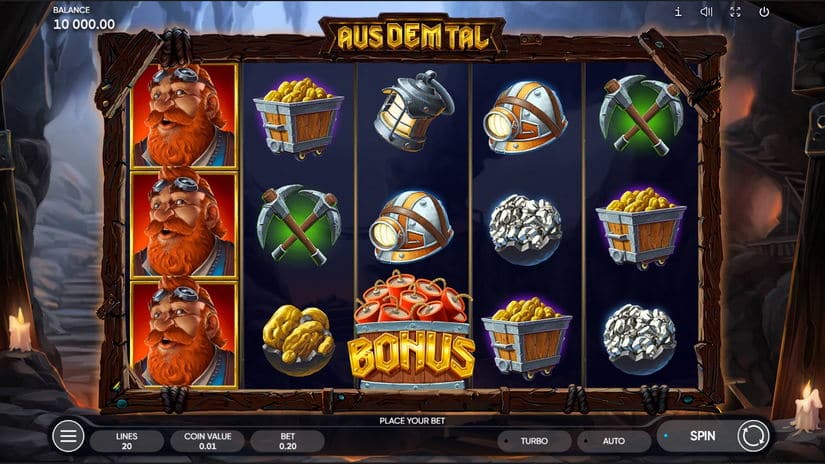 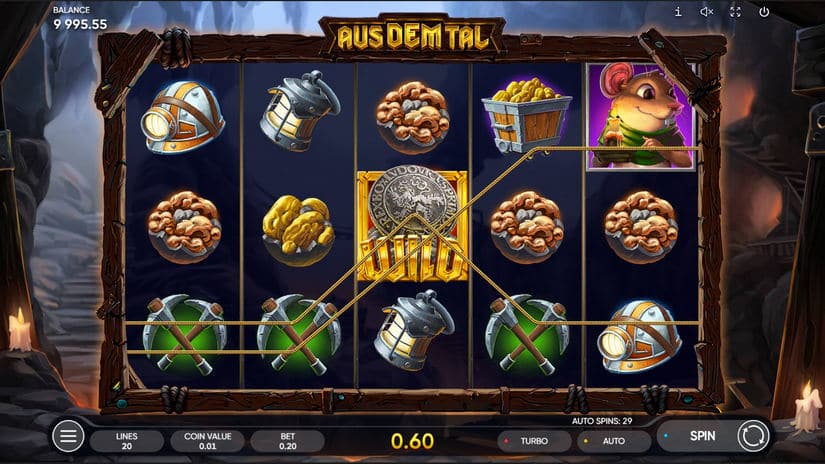 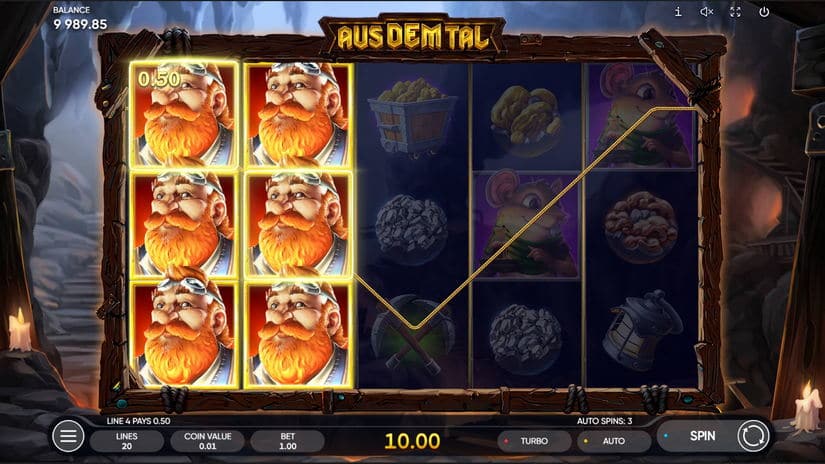 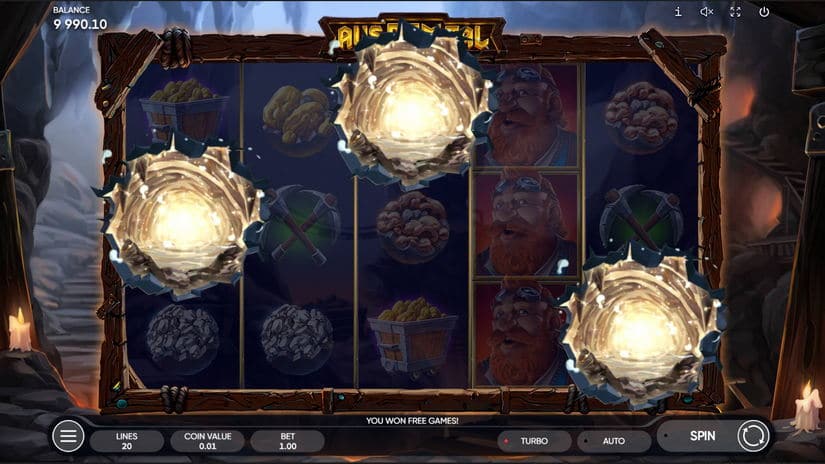 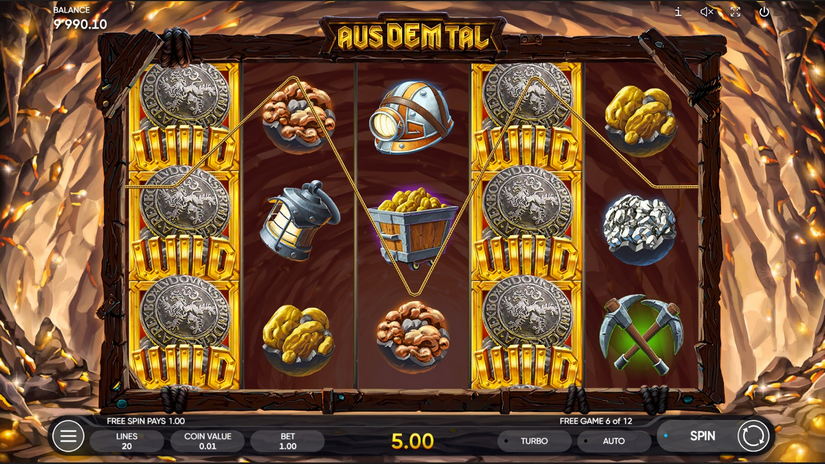 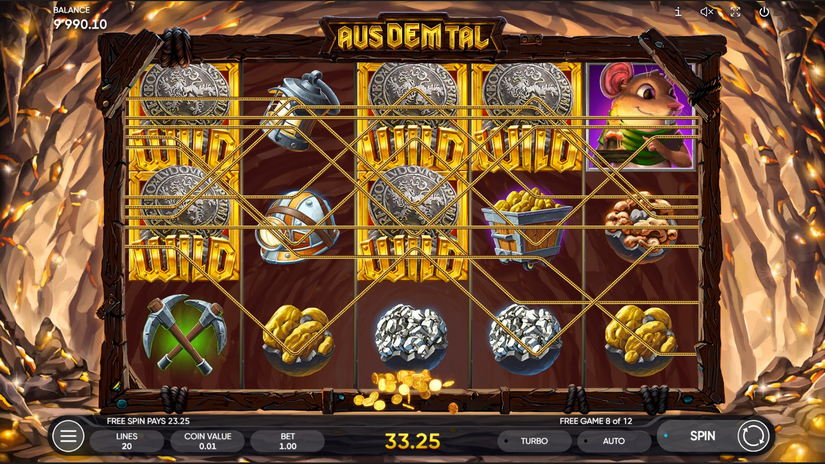 Can I play Aus Dem Tal free slot?
Yes, clashofslots.com is the place to test Aus Dem Tal with no sign up required. Any casino site partnering with Endorphina would also provide free access to the test mode.
Can I win real money on Aus Dem Tal slot?
Yes, registered account with a gambling site would be the only option to play real money Aus Dem Tal and hit real winnings.
What is the best place to play Aus Dem Tal?
When it comes to free play any trusted casino or casino related site such as clashofslots.com would be fine. Once real money gets involved legitimate operator with solid reputation and excellent services must be selected. Best casino would vary depending on one`s personal requirements.
Can I play Aus Dem Tal slot on mobile phone?
Yes, this game is mobile optimized and can be played on any device.
How to win playing Aus Dem Tal?
This is a licensed slot machine that generates random results, and all you need is a good luck. Look through the paytable to learn how and how much you can win.
Top Endorphina Casinos