Double Rainbow is the game developed by renowned studio Hacksaw Gaming. Released on 09.03.2022 it became a hit among gamblers for its immersive engine and high-quality artwork. This review describes all of its main characteristics that along with free test mode available on Clash of Slots give a great idea of experience you’ll be getting.

Double Rainbow is a thrilling chase-the-rainbow 7×6 grid slot game, featuring a max win of up to 5,000x. Create big clusters in combination with the correct Rainbow Reel for skyhigh wins!

This game has 7 Rainbow Reels, one for each color of the rainbow. Each Rainbow Reel has a Reel Multiplier that is applied to all wins of the Rainbow Reel’s color, while the Reel is active. Rainbow Reels are activated when a Cloud symbol lands on the reel and reset on every new round.

When a Cloud lands on a reel it will reveal a multiplier value and add it to the reel’s Reel Multiplier. 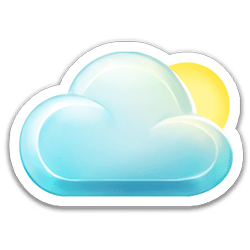 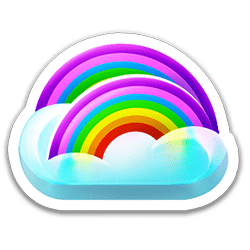 When all Rainbow Reels are simultaneously activated the Full Rainbow feature is triggered. When this occurs, all Reel Multipliers are multiplied by one of these possible values: x2, x3, x4, x5, x10. It also awards 5 extra spins where all activated Rainbow Reels remain active.

The symbol payouts displayed above reflect the currently selected bet level. The theoretical payout for this game is 96.38%. The RTP was calculated by simulating 10,000,000,000 rounds. 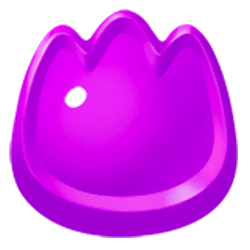 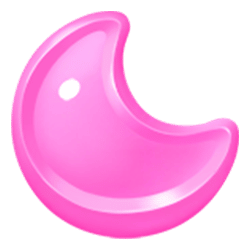 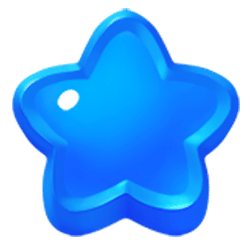 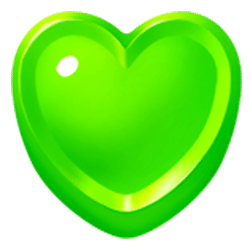 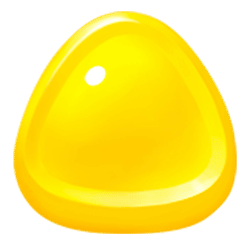 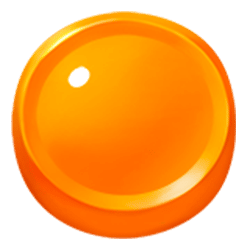 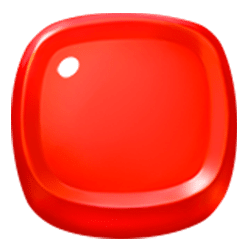 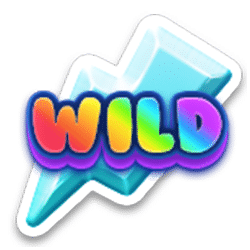 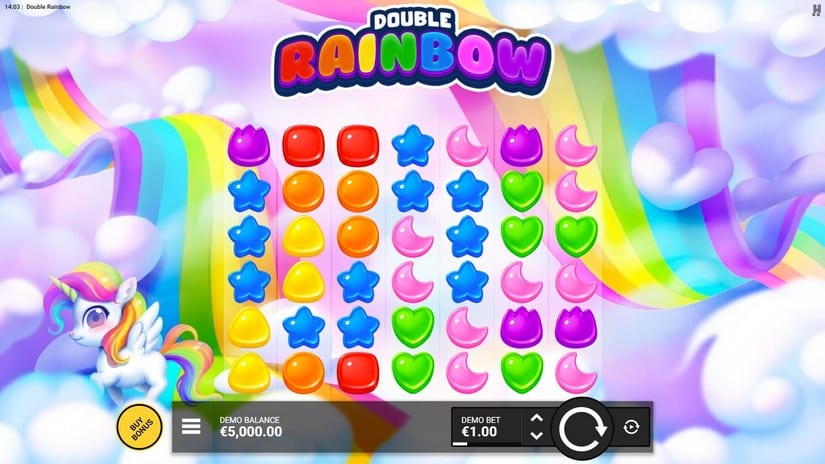 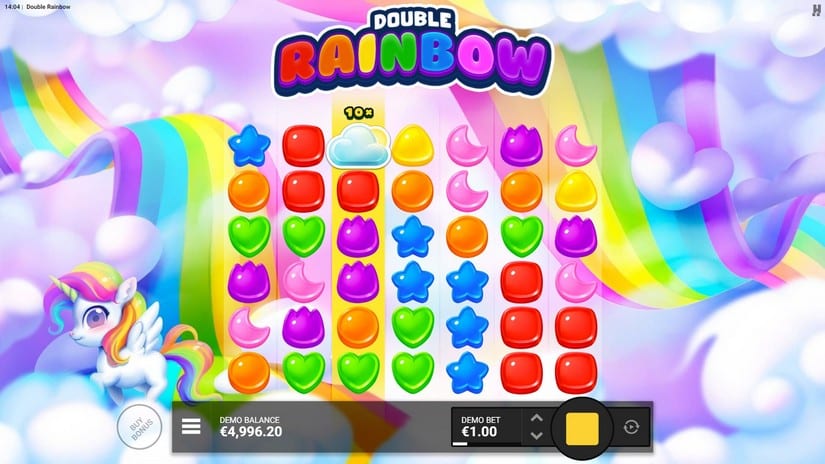 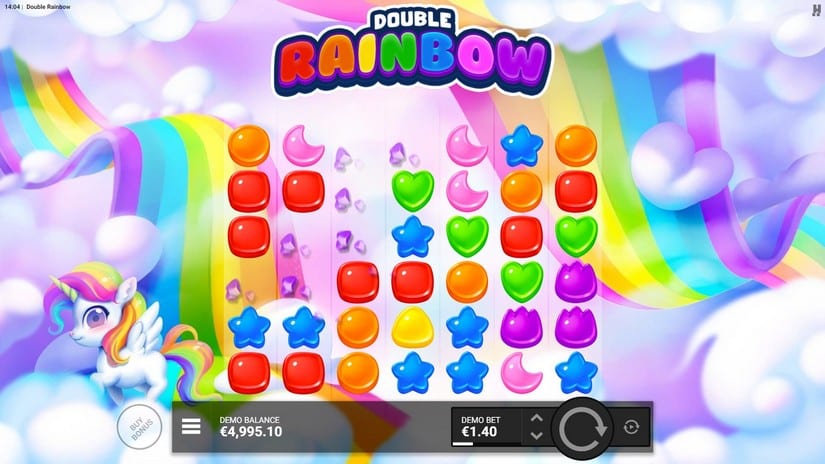 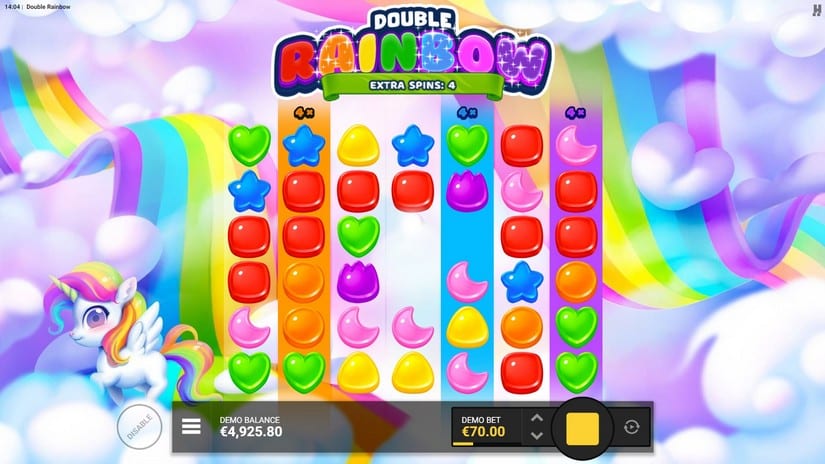 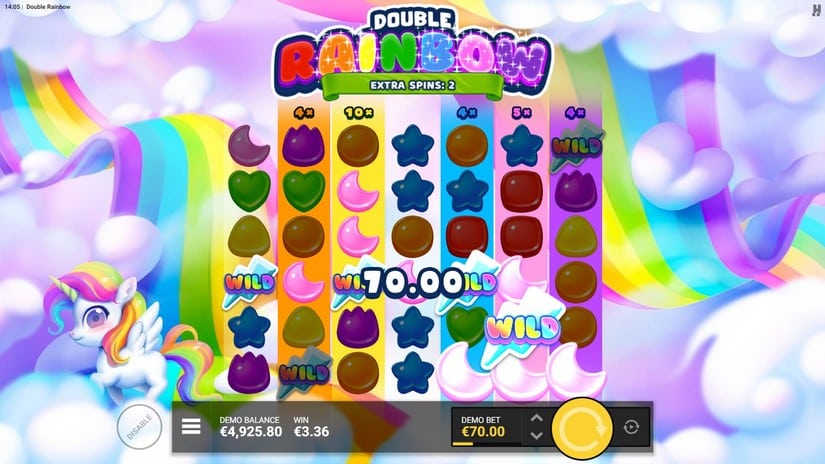 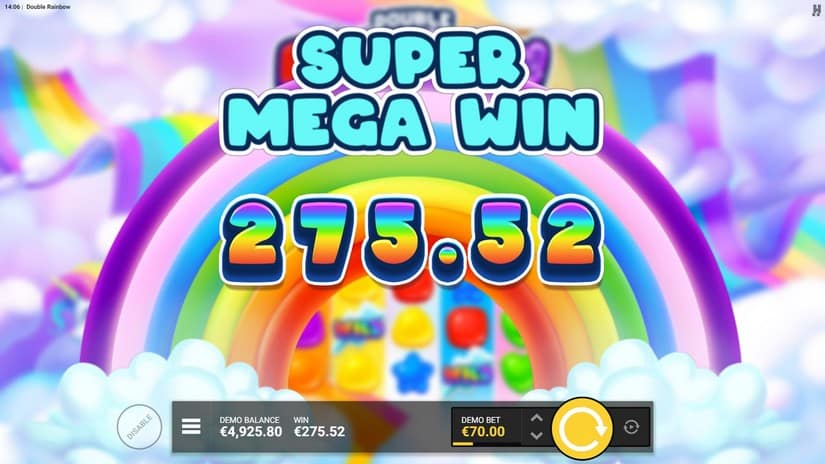 Can I play Double Rainbow free slot?
Yes, Clash of Slots is the place to play demo Double Rainbow with no registration required. Any casino site partnering with Hacksaw Gaming would also offer free access to the test mode.
Can I win real money on Double Rainbow slot?
Yes, registered account with a casino operator would be the only option to enjoy real money Double Rainbow and land real winnings.
What is the best place to play Double Rainbow?
When it comes to test mode any trusted casino or casino related site such as clashofslots.com would be fine. Once real money gets invested licensed operator with solid reputation and top tier services must be selected. Best casino would vary depending on one`s personal requirements.
Can I play Double Rainbow slot on mobile phone?
Yes, this slot machine is mobile optimized and can be played on any device.
How to win playing Double Rainbow?
This is a certified online slot that generates random outcomes, and all you need is a good fortune. Check the paytable to see how and how much you can win.