Narcos is the game developed by well known studio NetEnt. Released on 23.05.2019 it became an instant success among slot fans for its thrilling engine and amazing artwork. This review explains all of its main characteristics that along with free test mode available on clashofslots.com give a great idea of experience you’ll be getting.

It’s been almost a year and a half since the presentation of the Narcos slot at the London iGaming conference. Everyone was looking forward to this slot, but its release was regularly postponed for some reason. Now a branded slot machine Narcos is presented to our attention, based on the popular American TV series of 2015, which has gained enormous popularity among viewers. It tells about the criminal empire of the drug lord Pablo Escobar – by the way, you can see many of the characters of this series on the game reels.

As always, NetEnt did a great job on the design. As in the series, the actions of the game take place in Colombia, where Pablo Escobar began his criminal activities. On the technical part, the Narcos slot is equipped with 5 reels and 243 ways to generate wins. Players who have watched the Narcos series will be happy to see familiar characters on the reels, because they look very realistic thanks to the NetEnt’s efforts.

The symbols in the game are divided into low pay ones: card names J, Q, K and A, medium pay ones: flamingos and an airplane, and high pay ones: four of the most significant characters of the series. The special symbols include: wild (police badge), Locked Up Symbols (Pablo Escobar), Scatter (free spins vehicle) and Golden Locked Up Symbols (suitcase).

Bonus features of the Narcos slot

You will find a wide variety of bonus features while playing Narcos slot, each interesting in its own way. Let’s figure it out:

Locked Up feature is triggered when at least three drug lords Pablo Escobar appear in the same row. In this case, you will be taken to a new set of reels and get three spins. During this feature, you will see that the drug lord symbols are locked and have different monetary values, while the rest of the cells are empty, but additional symbols of Pablo Escobar may appear on them. Your task is to collect the largest possible cluster of these symbols. After three spins, all money values ​​are summed up and transferred to your balance.

Drive-by feature is triggered randomly. A passing car will shoot the game reels, after which the symbols which the bullets hit will convert to wilds.

Free spins feature is triggered when scatter symbols appear on game reels 1, 3, and 5. You will get ten free spins with a Drive-by feature triggered on every spin and the chance to get Walking Wilds to help you earn more wins.

Overall, it can be said that Narcos is another great branded slot from NetEnt. Besides the fact that it looks good, it also has many bonus features. To learn more about the features of the Narcos slot, launch it on our website and familiarize yourself with everything completely free of charge.

If you are a fan of branded slots and quality series, then there is good news for you. A few years later, Red Tiger decided to release a sequel to the Narcos slot, which was previously developed in collaboration with Netent. The slot is called Narcos Mexico and it offers improved features and, most importantly, even bigger winnings. 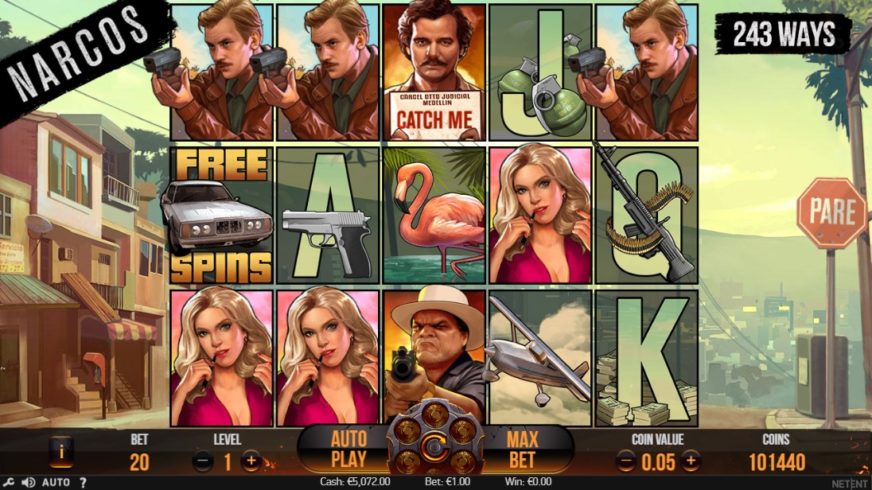 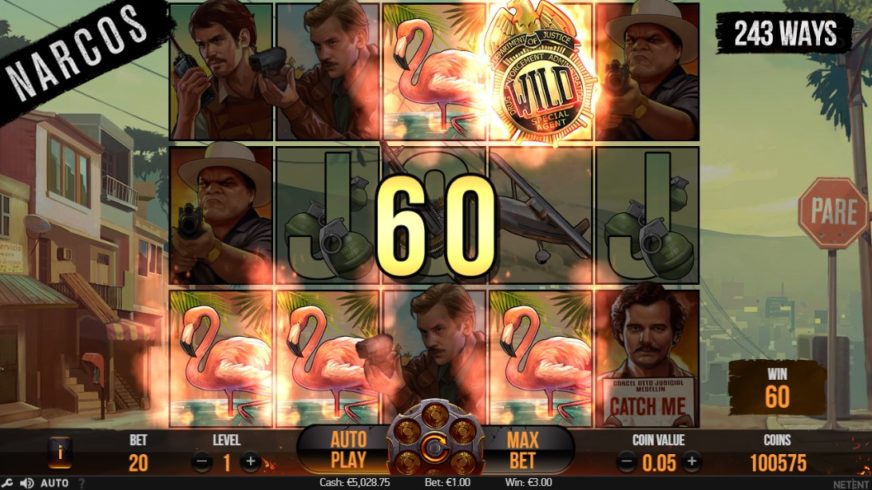 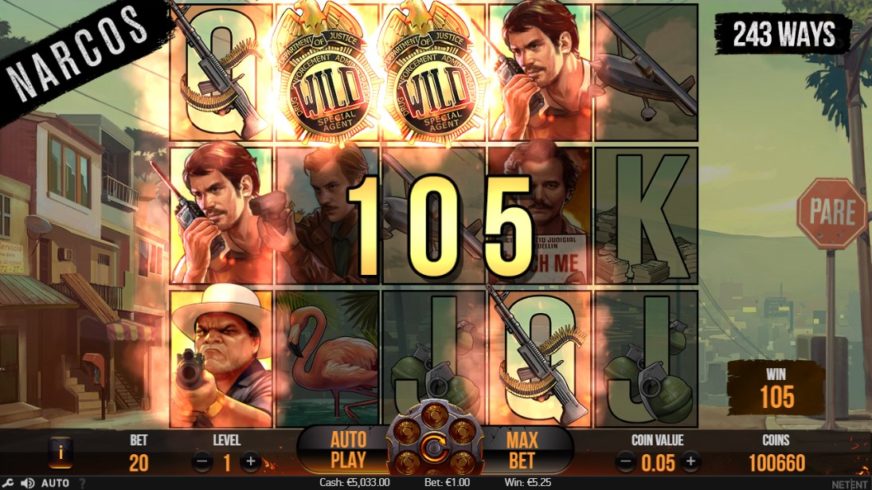 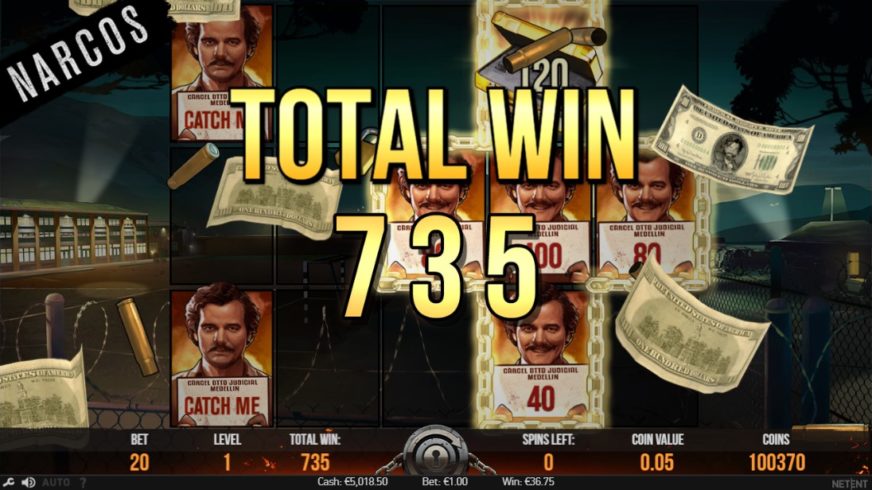 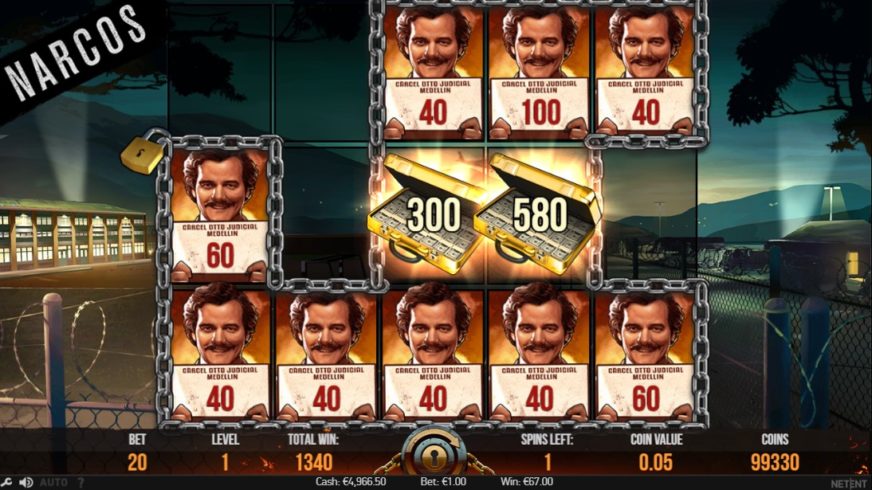 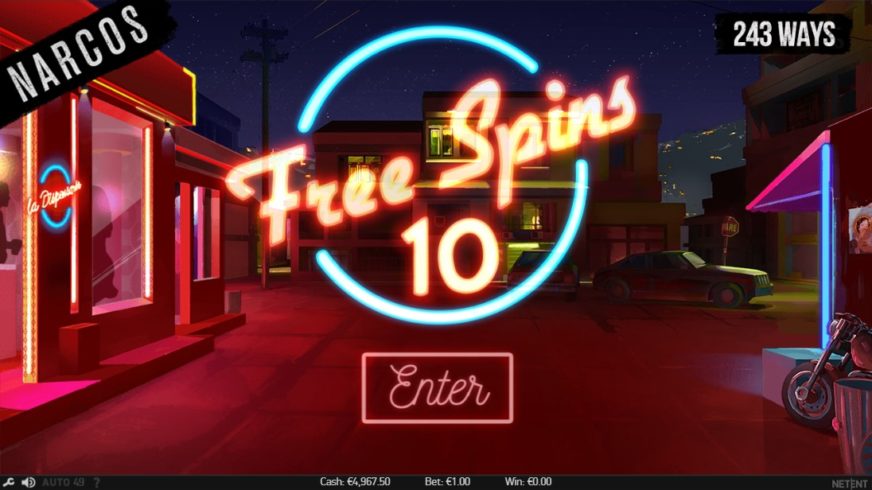 Can I play Narcos for free?
Yes, our site is the place to test Narcos with no sign up required. Any casino site partnering with NetEnt would also give free access to the demo mode.
Can I win real money on Narcos slot?
Yes, registered account with a casino would be the only option to enjoy real money Narcos and hit real winnings.
What is the best place to play Narcos?
When it comes to test mode any trusted casino or casino related site such as clashofslots.com would be fine. Once real money gets invested licensed operator with good reputation and excellent services must be selected. Best casino would vary depending on one`s personal requirements.
Can I play Narcos slot on mobile phone?
Yes, this title is mobile optimized and can be played on any device.
How to win playing Narcos?
This is a certified online slot that generates random outcomes, and all you need is a good fortune. Look through the paytable to find out how and how much you can win.
Top NetEnt Casinos