5 Lions Dance is the slot developed by renowned studio Pragmatic Play. Released on 15.09.2020 it became an instant success among players for its immersive engine and high-quality artwork. This review details all of its key characteristics that along with free test mode available on clashofslots.com give a great idea of experience you’ll be getting.

5 Lions Dance has become the third slot where the main characters were the majestic lions guarding the imperial treasures. However, it is inspired not so much by the Chinese theme, but by the dance you can see during the Chinese New Year celebrations.

The 5 Lions Dance slot offers five reels, four rows, and 1024 ways to win. Winnings are awarded for combinations of at least three identical symbols from left to right, starting with reel one.

You can join the powerful lions from any device by choosing a bet from $0.20 to $100 per spin. The 5 Lions Dance slot provides manual and automatic modes, as well as fast spins. The volatility is average, the RTP is 96.50%. The maximum winnings per spin are 2700x of your total bet.

The Lion Reel Feature starts when the Lion Reel symbol appears on reels 3, 4, and 5 in one spin. Then the first and second reels are combined into one huge reel, consisting of multiplier values, rather than standard symbols. You will see the 5x, 10x, 15x, 20x, 25x, 50x, 75x, 100x, 150x, or 200x multipliers. The reel spins once. That is why any value it stops at is applied to the total bet and paid out.

The Free Spins feature is activated when three scatter symbols appear on reels one, three, and five. During the free spins feature, after each spin, payments will be calculated (if any). Then all symbols of the lions’ head on the reels are converted into one randomly selected lion symbol for an additional payout.

In addition, every three scatters that appear on the playing field in one spin add another ten free spins to the existing ones. The main thing is the number of extra spins you get is unlimited.

Summing it up, I would like to say that 5 Lions Dance is a good slot with the Asian theme and majestic lions in the main role, which can bring winnings that are 2700 times higher than your bet. 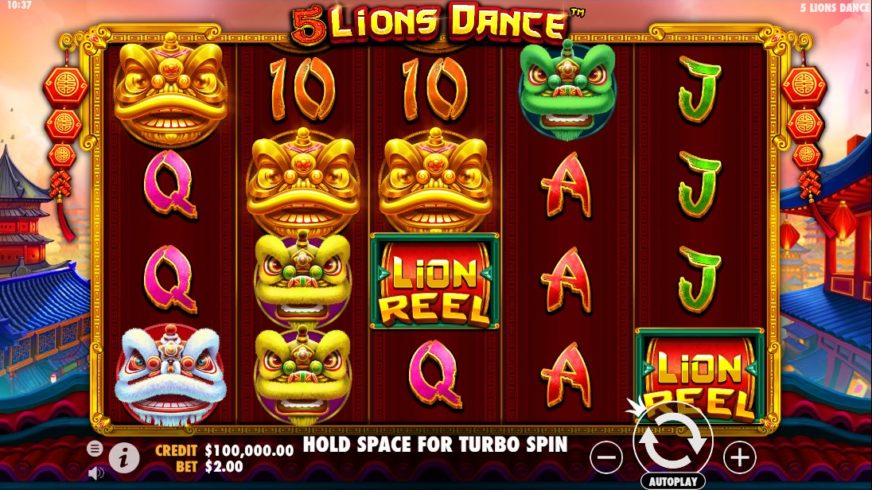 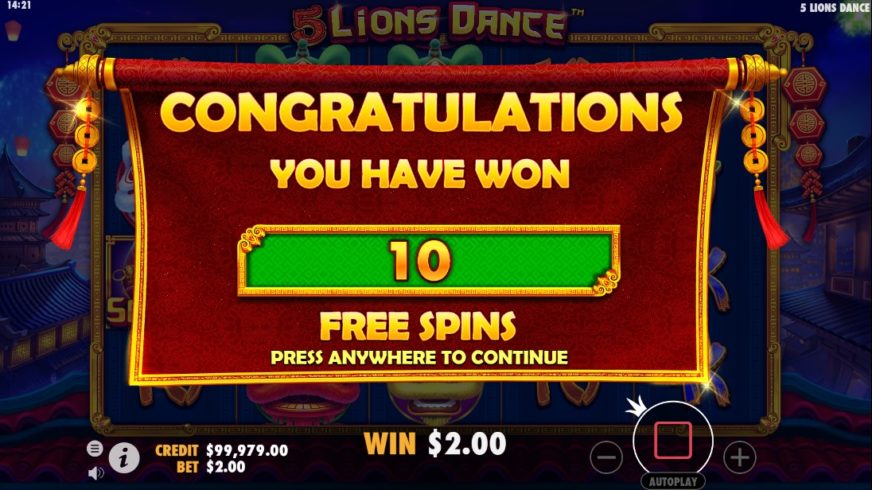 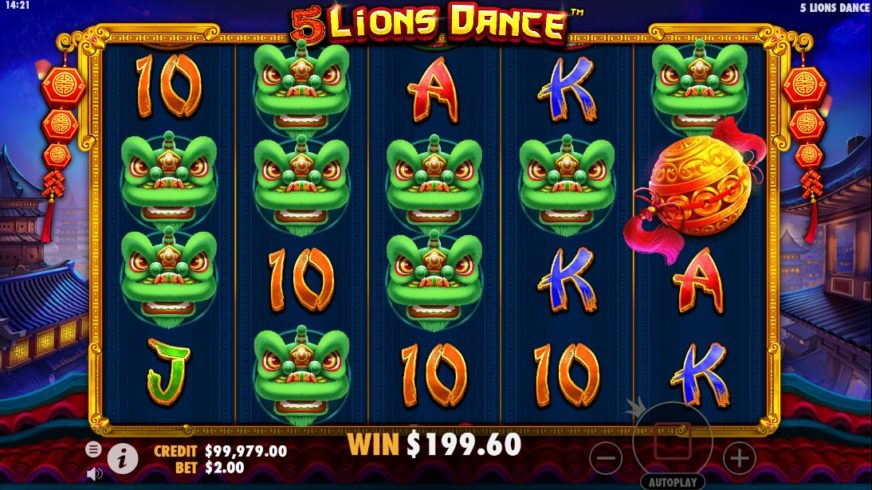 Can I play 5 Lions Dance free slot?
Yes, Clash of Slots is the place to try 5 Lions Dance with no registration required. Any casino site partnering with Pragmatic Play would also offer free access to the demo mode.
Can I win real money on 5 Lions Dance slot?
Yes, registered account with a gambling site would be the only option to play real money 5 Lions Dance and hit real winnings.
What is the best place to play 5 Lions Dance?
When it comes to test mode any trusted gambling operator or casino related site such as Clash of Slots would be fine. Once real cash gets invested licensed operator with good reputation and premium services must be selected. Best casino would vary depending on one`s personal requirements.
Can I play 5 Lions Dance slot on mobile phone?
Yes, this slot is mobile friendly and can be played on any device.
How to win playing 5 Lions Dance?
This is a certified video slot that generates random outcomes, and all you need is a good fortune. Check the paytable to find out how and how much you can win.