For the studio of this rank Frog Grog is a remarkable release that’s made it to the lobbies of a number of operators. Frog Grog hit the market on 19.10.2016 offering proven gameplay and high-quality visuals. You can enjoy free Frog Grog test mode on clashofslots.com as a guest with no registration required.

Take a look at the slot metrics to see if that’s the perfect choice for you. Frog Grog offers 96.1% RTP, High risk level and x1616 win potential, max win. With a pretty balanced math model and the possibility of the considerable swings, the game is always exciting. Overall, it delivers powerful gaming experience.

Frog Grog appeals to those who prefer gameplay that has both conventional and experimental elements to it. If no feature gets activated, the base game is still entertaining but once wilds, scatters or other special symbols or features land on the reels, it gets to the whole new level.

The magic slot Frog Grog from Thunderkick invites you to an exciting journey to a house filled with magic to study various potions.

Around the play field, you will see various things for working magic. Next to the reels, there is a wooden chest of drawers with an ancient book on it. A huge cauldron of liquid is in front of the reels. The symbols in the slot are various jars of potions. There are six main images in the slot. There is one special symbol in the slot — a huge frog, which is a wild; it replaces simple symbols in the slot and has an interesting feature.

The first feature of the slot is that the symbols that form a win disappear from the cells, and new ones appear in their place, so you have another chance to get a paid combination.

Also, pay attention to the multipliers from x1 to x7 next to the reels. Each time you get a win, the multiplier increases. Further successive combinations will increase it even more. For five consecutive wins, you can get the maximum multiplier x7, which will be applied to your winnings.

As mentioned above, the frog not only replaces missing symbols in the slot but has an interesting feature. Even if it fails to create a combination, all symbols located next to it vertically and horizontally disappear, and new ones appear in their place.

Mystery Game: this function is activated accidentally during a normal game. All low-value symbols disappear from the play field, leaving only high-value ones. And for deleted symbols, payments will be calculated as if they did not disappear. A randomly selected multiplier from x1 to x7 will also be applied. 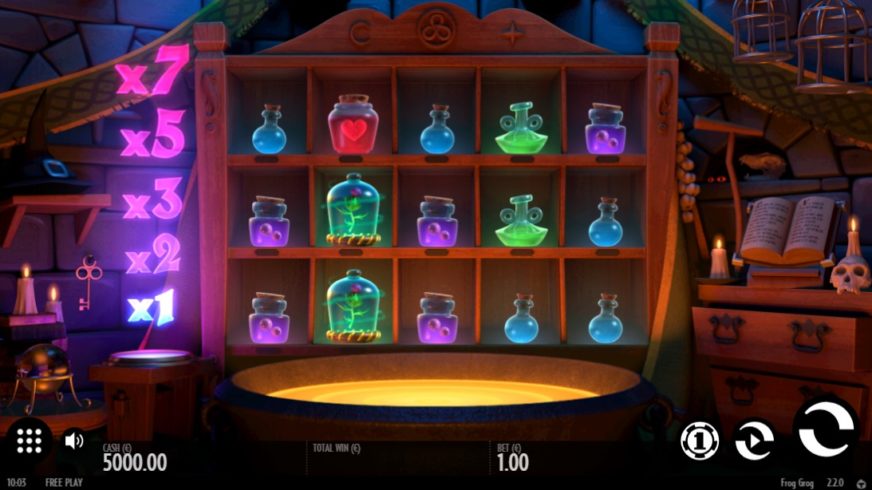 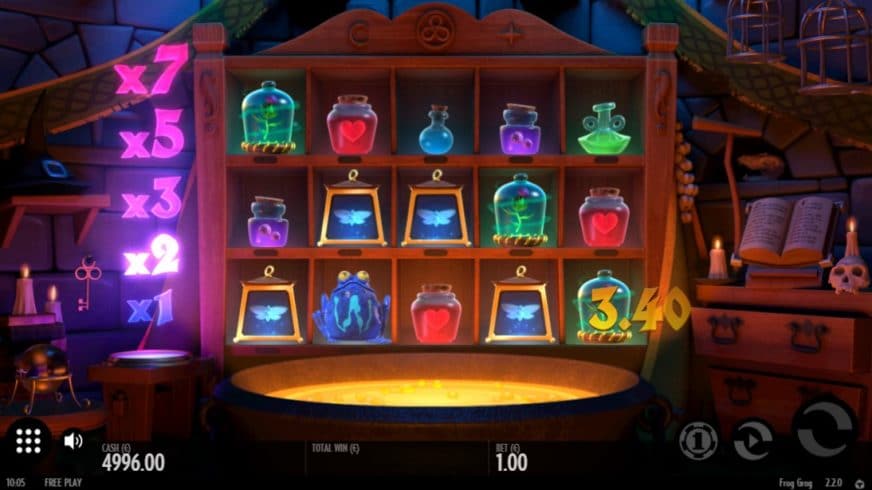 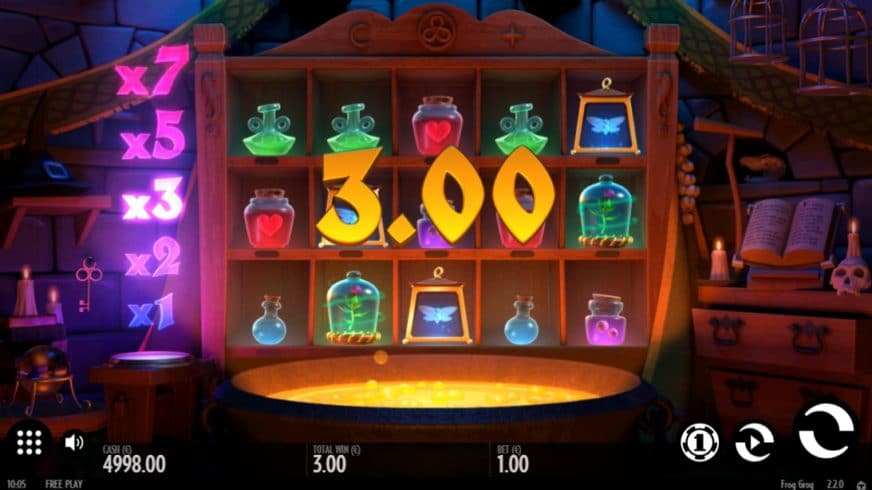 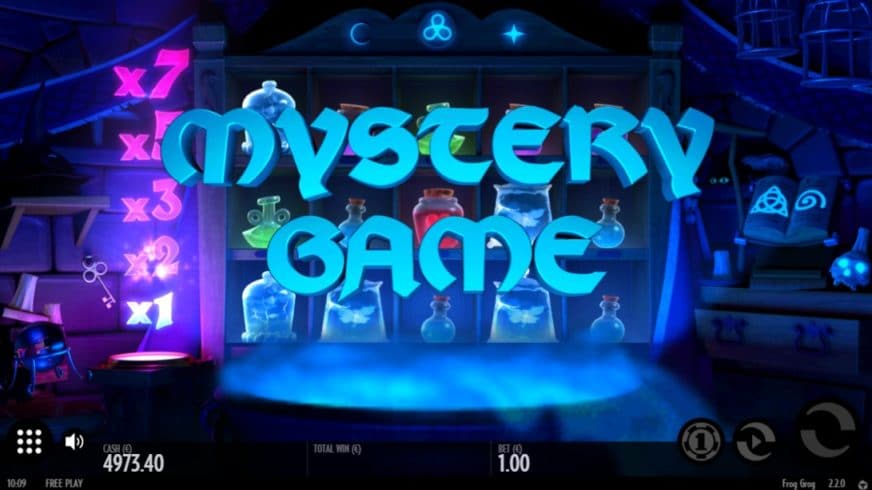 Can I play Frog Grog free slot?
Yes, clashofslots.com is the place to play demo Frog Grog with no registration required. Any gambling site partnering with Thunderkick would also offer free access to the test mode.
Can I win real money on Frog Grog slot?
Yes, registered account with a casino operator would be the only option to enjoy real money Frog Grog and land real winnings.
What is the best place to play Frog Grog?
When it comes to demo mode any trusted casino or casino related site such as clashofslots.com would be fine. Once real cash gets involved licensed operator with solid reputation and premium services must be selected. Best casino would vary depending on one`s personal requirements.
Can I play Frog Grog slot on mobile phone?
Yes, this slot is mobile friendly and can be played on any device.
How to win playing Frog Grog?
This is a licensed title that generates random outcomes, and all you need is a good luck. Look through the paytable to find out how and how much you can win.