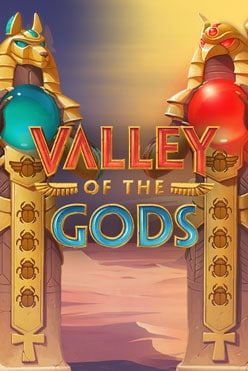 Valley Of The Gods
Yggdrasil Gaming

Valley of the Gods 2 Slot Review

Valley of the Gods 2 is the game developed by recognized studio Yggdrasil Gaming. Released on 24.09.2020 it became an instant success among slot fans for its immersive engine and high-quality artwork. This review describes all of its key characteristics that along with free test mode available on clashofslots.com give a good idea of experience you’ll be getting.

Valley of the Gods 2 is the second part of the popular ancient Egyptian-themed slot from Yggdrasil Gaming. The familiar theme of Egypt with traditional golden sands, gods, and scarab beetles opens in a new mode for those who discover the Valley of the Gods 2 slot. Instead of the usual 5×3 reels, you will find yourself on a more sophisticated inverted pyramid reel grid, gradually opening up to 20160 possible paylines.

Like in the first part, the developer uses a system of “unlocking” the extreme symbols on each reel. Therefore, the original format 1-2-3-4-5-2 subject to full disclosure of the reels turns into 3-4-5-6-7-8. This increases possible winning combinations from 240 to 20160.

Valley of the Gods 2 provides you with an opportunity to join the history of Egypt at bets from €0.25 to €125. The volatility of the slot is between medium and high, the maximum winning is x5481, and the RTP is 96.30%.

There is only one special symbol that appears during the bonus game. This is a wild reel. It is one of the three bonus round modifiers. Otherwise, there are no usual special symbols, for example, scatters. It is possible to say that each symbol is special, because any winning combination can expand the reel grid and give a respin.

Bonus Features of the Valley of the Gods 2 Slot

Unlike many other slots, not only the bonus game but also the main mode will be interesting here, because each win activates a respin with the probability of not only obtaining an additional payout, but also subsequent respins, which will eventually open the bonus round. Each winning symbol in the base game gives one beetle that clears one cap from the reels. When all these caps are removed, a bonus round is activated.

The bonus game of the Valley of the Gods 2 slot can finish very quickly, because only one initial and one additional life are given. They are used if the previous spin did not bring any winnings. However, if there is a series of winnings, players can activate up to three modifiers: a wild reel, a multiplier, and an extra life.

In order to activate modifiers, you need to collect scarab beetles of different colors, and they appear due to symbols from prize combinations. 5 red beetles give an extra life, 5 gold beetles – a wild reel, and 5 blue ones increase the multiplier by +1.

Valley of the Gods 2 Symbols and Paytable 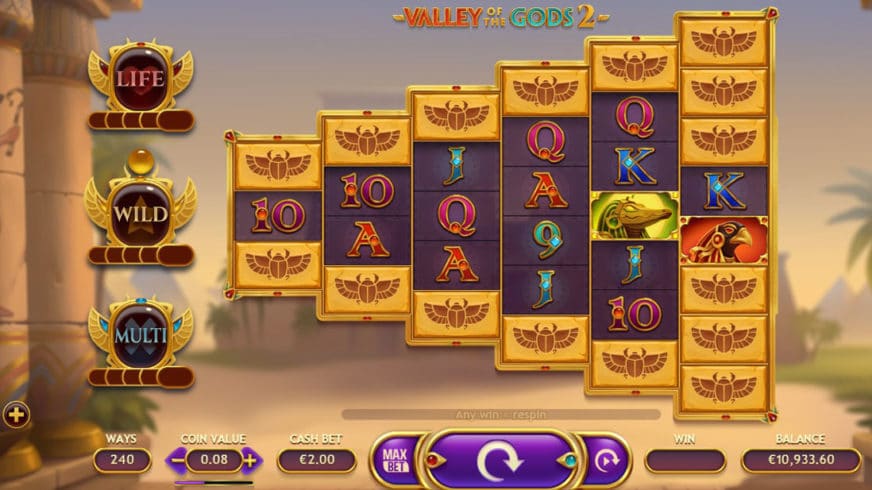 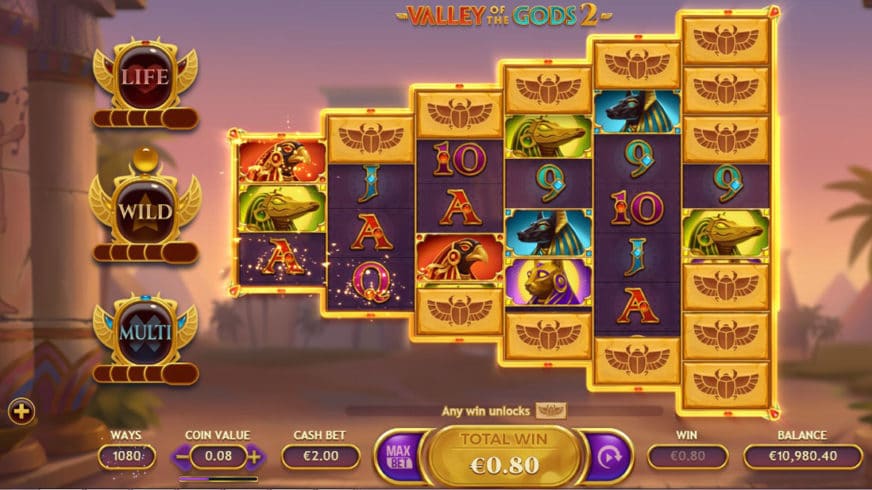 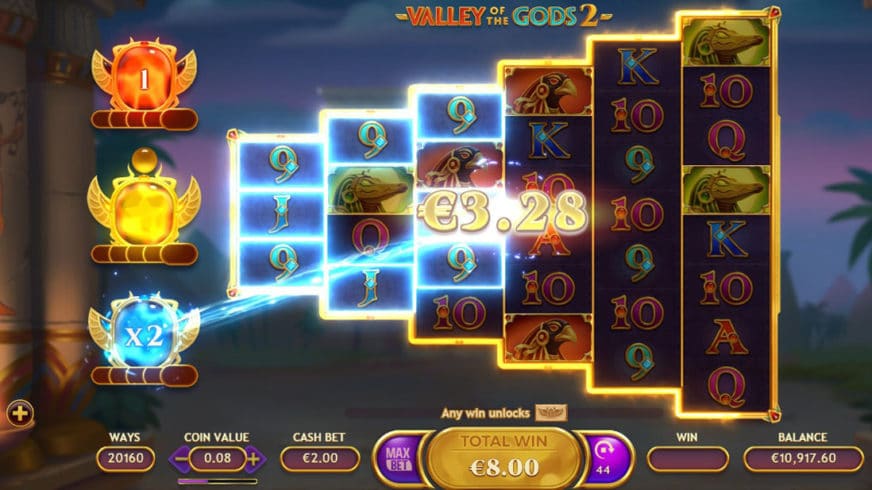 Valley of the Gods 2 Slot FAQs

Valley of the Gods 2 Reviews by Players