Take a look at the game metrics to decide if that’s the perfect option for you. Pyramid Quest for Immortality offers 96.48% theoretical return, Below average dispersion and x36000 win potential, max win. With a quite balanced math and the possibility of the massive swings, the game is always thrilling. Overall, it delivers powerful gaming experience.

Pyramid Quest for Immortality appeals to those who prefer gameplay that has both conventional and unique elements to it. If no feature gets activated, the base mode is still interesting but once wilds, scatters or other special symbols or features show up on the reels, it gets to the whole new level.

Despite the fact that there are a huge number of Egyptian-themed slots, in which you can see pharaohs, pyramids and tombs, the developers of slots do not stop and continue to release more and more new models. Therefore, the NetEnt company has replenished its portfolio with the first slot for them with the theme of Egypt. Technically, the Pyramid Quest for Immortality slot has 5 reels with a 3x4x5x4x3 row structure and a whopping 720 ways to generate wins.

High pay images include a snake, an eagle, a scarab, Cleopatra, and a pharaoh. The names of playing cards from 10 to A are payable lower. The wild is the only special symbol that you will see in the game. It is used to replace all other symbols in the slot.

Bonus Features of the Pyramid Quest for Immortality Slot

The first thing to start with is how the symbols appear on the panel. Pyramid Quest for Immortality uses the Avalanche technology. As with the cult favorite Gonzo’s Quest, symbols appear on the reels instead of the traditional spinning motions. When you have a winning combination, winning symbols explode and disappear, leaving room for new ones. This continues as long as you get winning combinations.

Another interesting feature is related to wild symbols. If a wild symbol appears at the top of reels 2, 3 or 4 and is part of a win, it will turn into a wild for the next combination.

In summary, Pyramid Quest for Immortality is a great addition to NetEnt’s line of games. 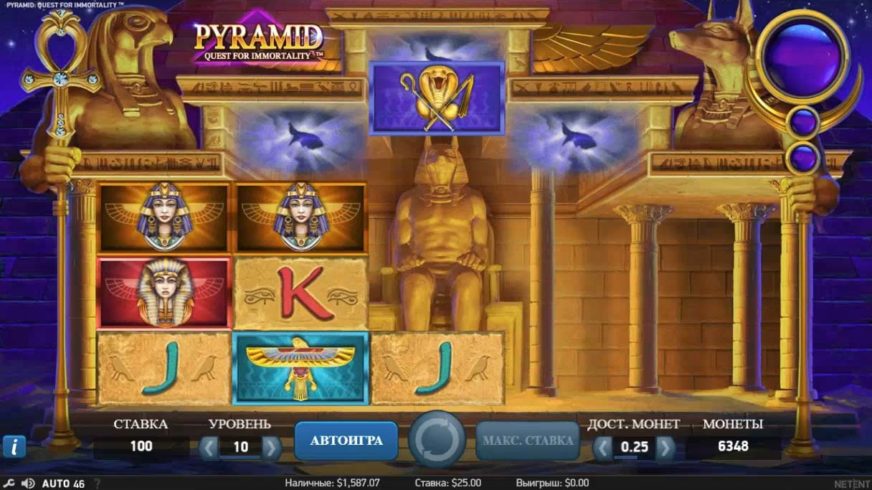