For the developer of this status Greek Gods is a remarkable launch that’s made it to the lobbies of numerous casinos. Greek Gods was launched on 12.12.2019 offering proven gameplay and high-quality visuals. You can play free Greek Gods test mode on our site as a visitor with no registration required.

Take a look at the game metrics to see if that’s the best choice for you. Greek Gods offers 96.5% RTP, Above average risk level and x1000 win potential, max win. With a pretty balanced math and the possibility of the considerable swings, the game is always thrilling. Overall, it delivers strong gaming experience.

Greek Gods appeals to those who appreciate gameplay that has both traditional and original elements to it. When no bonus gets activated, the base mode is still interesting but once wilds, scatters or other special symbols or features land on the reels, it gets to the whole new level.

It must be noted that the Greek Gods slot uses a very popular ancient Greek theme. There are quite a few slots with this theme released by various providers. Indeed, even if you look at the portfolio of Pragmatic Play alone, you will see a lot of slots dedicated to the gods and Olympus. By the way, the Pragmatic Play developers released the Hercules & Pegasus slot just a month ago, which was also based on the ancient Greek heroes: Hercules and his faithful companion Pegasus. Now it’s time to climb Mount Olympus again and try your luck in an ancient Greek-themed slot called Greek Gods.

The Greek Gods slot is fully consistent with the chosen theme visually. The game screen is set against a background of clouds illuminated by the bright sun during the main gameplay, and this background changes to dark blue during the free spins feature. The reels are located in the Parthenon (ancient Greek temple), where the gods lived.

Technically, the Greek Gods slot is equipped with a standard playing field 5×3, and 243 number of ways to generate your winnings. A set of symbols will help you get your winnings, including the names of playing cards from 10 to A, bowls, harps, charming Hera (Zeus’s wife), and of course mighty Zeus – the god of the sky, thunder, and lightning. A wild symbol is also provided in the Greek Gods slot – it appears on all 5 reels and can replace all images in the game, except for the scatter symbol (lightning).

The first feature is an additional row above reels 3, 4, and 5: it contains various awards that change with each spin. This feature is called Random Award and can bring you cash prizes or trigger a bonus wheel or a free spins round. In order to get random awards, you need to collect a stack of scatter symbols under one of them (or under all of them at once). Random awards appear above reels 3, 4, and 5 during the main gameplay. Each reel gets a random award during free spins.

In conclusion, it can be said that Greek Gods is not the best slot that can be found in the Pragmatic Play portfolio. However, this slot definitely deserves your attention, so launch Greek Gods on our website completely free of charge – who knows, maybe the Greek gods will give you great prizes. 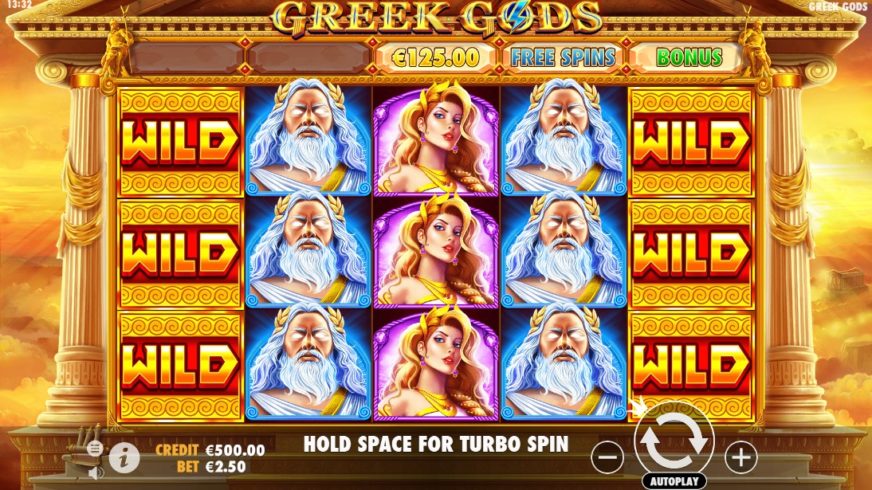 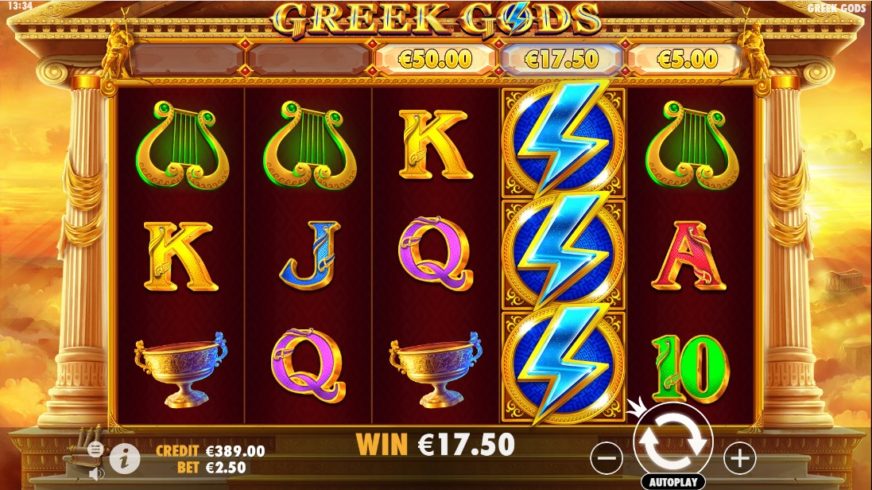 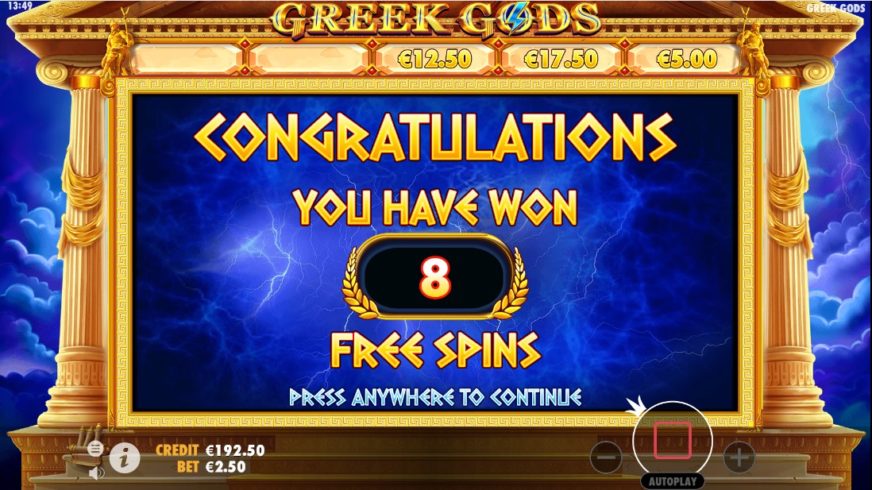 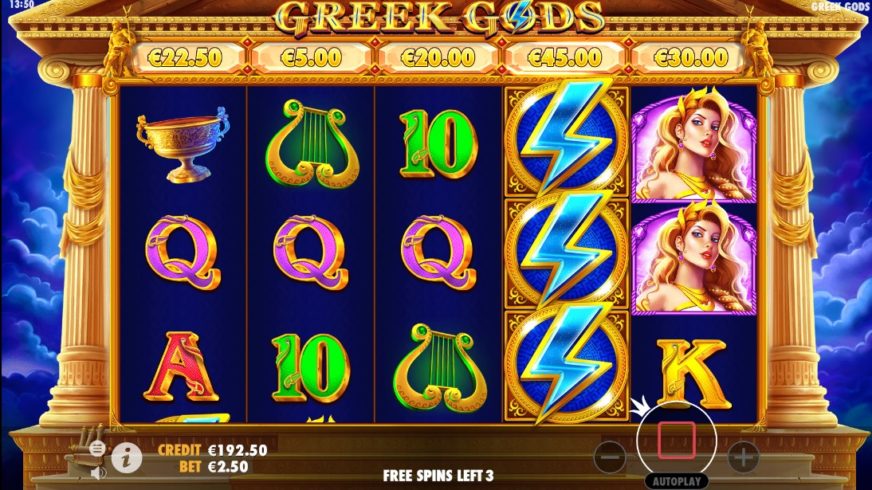 Can I play Greek Gods free slot?
Yes, our site is the place to try Greek Gods with no sign up required. Any gambling site partnering with Pragmatic Play would also provide free access to the test mode.
Can I win real money on Greek Gods slot?
Yes, registered account with a casino operator would be the only option to enjoy real money Greek Gods and land real winnings.
What is the best place to play Greek Gods?
When it comes to demo mode any trusted casino or casino related site such as Clash of Slots would be fine. Once real cash gets involved legitimate operator with good reputation and excellent services must be selected. Best option would vary depending on one`s personal preferences.
Can I play Greek Gods slot on mobile phone?
Yes, this video slot is mobile optimized and can be played on any device.
How to win playing Greek Gods?
This is a licensed video slot that generates random results, and all you need is a good fortune. Look through the paytable to see how and how much you can win.