For the studio of this status Hot Chilli is a wonderful release that’s made it to the lobbies of a number of gambling sites. Hot Chilli hit the market on 08.08.2019 offering popular gameplay and premium graphics. You can enjoy free Hot Chilli demo mode on Clash of Slots as a visitor with no sign up required.

Take a look at the slot metrics to see if that’s the perfect choice for you. Hot Chilli offers 96.52% return, Average volatility and x888 win potential, max win. With a quite balanced math and the possibility of the big swings, the game is always thrilling. Overall, it provides powerful gaming experience.

Hot Chilli appeals to those who love gameplay that has both conventional and original elements to it. If no bonus gets activated, the base game is still interesting but once wilds, scatters or other special symbols or features appear on the screen, it gets to the whole new level.

Fans of spicy food probably know about chili pepper. It is incredibly spicy, but at the same time it contains a lot of useful vitamins for the human health. In addition to the fact that this pepper is often used in various dishes, it is also often used by the slots developers. This time the Pragmatic Play company dedicated its Hot Chilli slot to this pepper.

Visually, the Hot Chilli slot looks very interesting. The game reels are located in the Chinese hot pot for cooking called hogo. It is here where the symbols presented in the game will be cooked in a large amount of sauce. Two golden dragons are entwined around this hot pot. This gives the game even more beauty. The playing field itself is located on a dark blue background. The game’s logo is at the top, and the paytable is on the left. Technically, Hot Chilli is a three-reel, nine-payline slot from the developers of Pragmatic Play. It can be played from nine cents to $45 per spin on all devices.

The Hot Chilli slot symbols include various types of foods that can be found in Chinese dishes: tofu cubes, bacon, pieces of meat, shrimp, mushrooms, corn, and, of course, chili pepper. The premium symbol is a shrimp. Three shrimps on the reels will bring the winning that is 11.11 times higher than your bet. Chili pepper is also a very important symbol. It appears on the game board with multipliers from 2x to 5x.

Chili pepper is also a wild symbol and replaces all images except for the tofu cubes. However, as you can see from the paytable, you cannot get three 5x wilds at the same time, because 3x, 4x, and 5x wilds appear only in the middle reel. In the Hot Chilli slot tofu cubes are a kind of scatter symbols. However, unlike other games where the scatter can activate free spins or other bonus rounds, here it can be paid only by appearing anywhere on the playing field, even if there is only one symbol. The highest reward you can get with a wild chili combo with the 2x-5x-2x multipliers will bring you the winning that is 555.55 times higher than your bet on a single line.

For many players, of course, it will be a slight disappointment that the developers of Pragmatic Play did not add any bonus rounds in the form of free spins to the Hot Chilli slot. The only thing we can see is the formation of combinations on nine paylines with various Chinese food and wild symbols with multipliers. By the way, the formation itself looks very interesting, because after getting the prize, the symbols will be taken with Chinese sticks directly from the boiling sauce.

Summing it up, it is possible to say that Hot Chilli is an interesting slot from Pragmatic Play. It has a classic style, but at the same time it has wild symbols and multipliers to improve the gameplay. 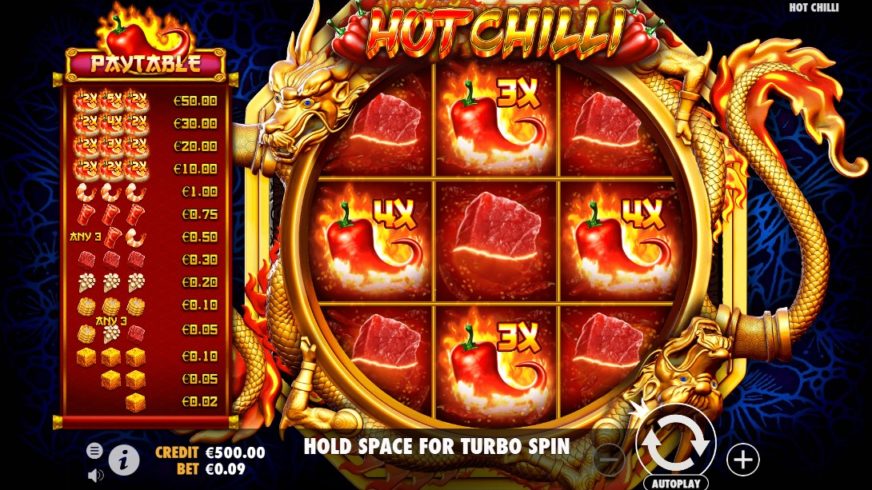 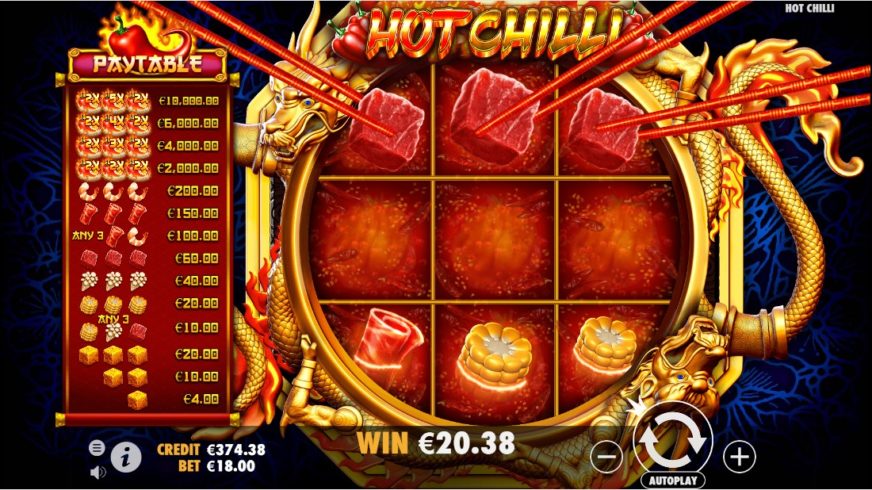 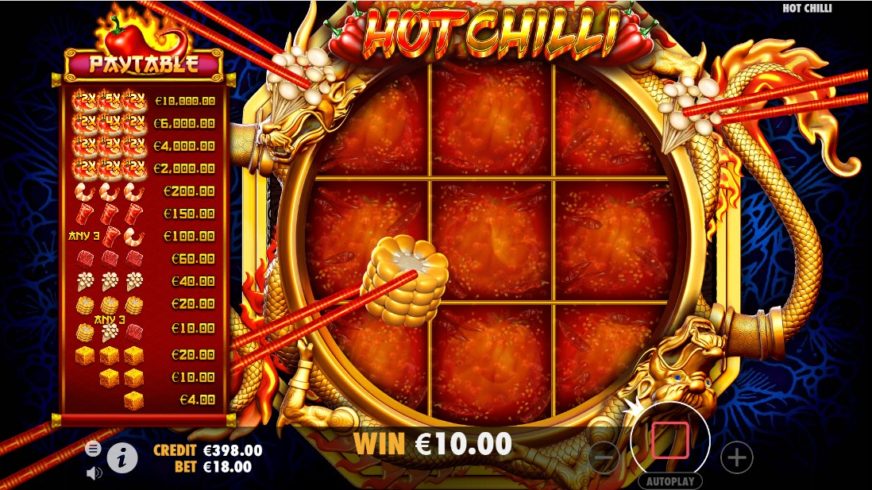 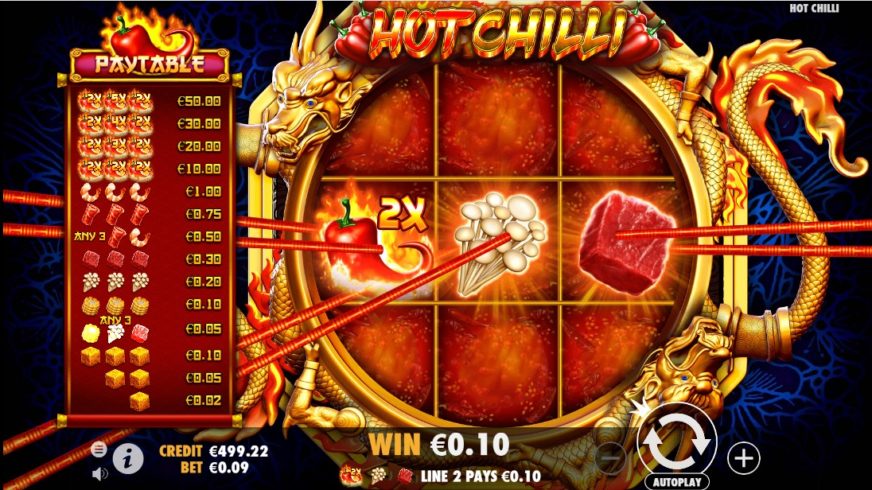 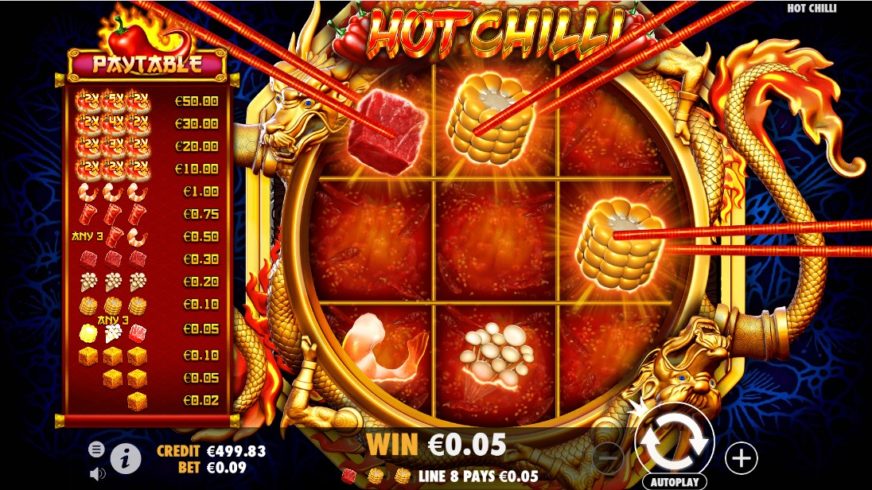 Can I play Hot Chilli for free?
Yes, clashofslots.com is the place to test Hot Chilli with no registration required. Any gambling site partnering with Pragmatic Play would also offer free access to the test mode.
Can I win real money on Hot Chilli slot?
Yes, registered account with a casino operator would be the only option to play real money Hot Chilli and get real winnings.
What is the best place to play Hot Chilli?
When it comes to demo mode any trusted gambling operator or casino related site such as Clash of Slots would be fine. Once real money gets involved licensed operator with solid reputation and premium services must be selected. Best choice would vary depending on one`s personal requirements.
Can I play Hot Chilli slot on mobile phone?
Yes, this title is mobile optimized and can be loaded on any device.
How to win playing Hot Chilli?
This is a licensed video slot that generates random outcomes, and all you need is a good luck. Look through the paytable to learn how and how much you can win.