Money Mouse is the slot developed by well known studio Pragmatic Play. Released on 11.12.2019 it became a hit among players for its exciting engine and amazing artwork. This review explains all of its main characteristics that along with free demo mode available on Clash of Slots give a great idea of experience you'll be getting.

The Money Mouse slot from the Pragmatic Play developers is dedicated to the Chinese New Year. By the way, an interesting fact is that there is no exact date when the Chinese New Year is celebrated, unlike its western fellow. This holiday is celebrated on a different date every year, as it falls on the second new moon and is celebrated between January 21 and February 21. However, due to the developers of Pragmatic Play, you will be able to celebrate this holiday any day, because the Money Mouse slot has everything for this.

The slot was named Money Mouse not by chance, because 2020 was the year of the metal rat, and this animal was ruling throughout the year. The design of the Money Mouse slot fully corresponds to the chosen theme and is made in the spirit of the holiday. The playing field is located in a traditional Chinese building, behind which there are people cheering and fireworks in the sky. As for the technical characteristics, the Money Mouse slot provides 5 reels and 25 lines to form your winnings.

You will see 8 regular symbols in the paytable: four low pay and four high pay ones. Four low pay symbols are card names from J to A. Four higher paying ones are oranges, drums, firecrackers, and a dragon mask. A cute smiling mouse is a wild symbol that replaces other images in the game and brings a win 20 times your bet for a combination of 5 such symbols on one line. The scatter symbol is a money tree, which triggers free spins when you collect the required number of them.

The first thing to start with when analyzing the bonus features is the fact that the Money Mouse slot is a copy of another slot called Wolf Gold by the same developer. However, this time it is focused primarily on the Asian market, and therefore the theme and symbols were changed. This means that if you played Wolf Gold slot before, then all the features implemented in Money Mouse will be familiar to you. But we will tell the details about Money Mouse for those who never played Wolf Gold for some reason and have no idea about the features implemented in it.

The Free Spins feature is triggered when you get 3 scatter symbols on reels 1, 3, and 5, after which you get 5 free spins. The 3 middle reels (2, 3, and 4) will merge into one and display a huge symbol during this feature.

There is another feature called Money Respin in the Money Mouse slot. Pay attention to the red lantern symbol that appears on all reels. This feature is triggered when 6 or more lanterns appear on the playing field. Launch symbols remain on the reels, and the rest of the slots will be empty.

You are initially awarded 3 respins, during which only red lantern symbols will appear on the playing field, and each time this happens they are also locked in their position and the number of respins resumes to 3. This continues until lanterns land on the reels or until the entire playing field is filled with them. Please note that the lanterns appear with monetary values, which are summed up and transferred to your balance after the end of the round. Moreover, you will get Grand Jackpot, if you manage to fill all 15 slots with lanterns.

In conclusion, it can be said that Money Mouse is a good slot that allows to win a jackpot from the Pragmatic Play developers, but it is a copy of the previously released Wolf Gold slot. 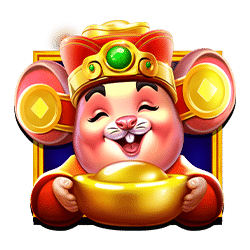 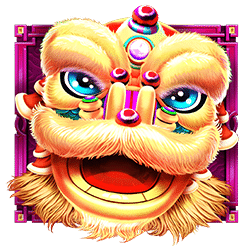 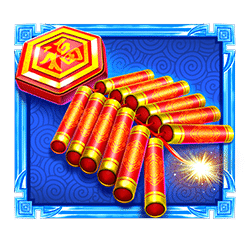 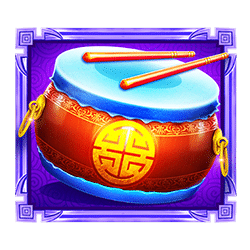 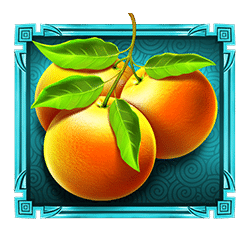 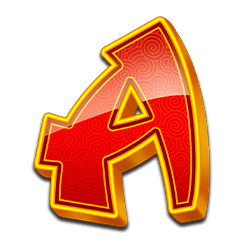 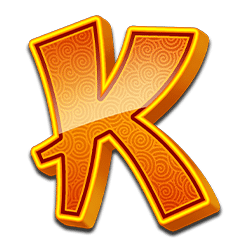 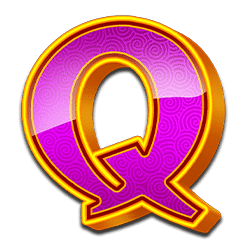 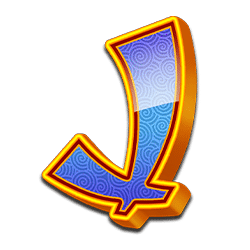 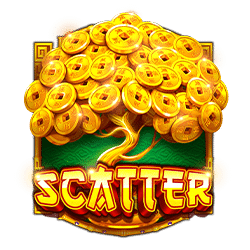 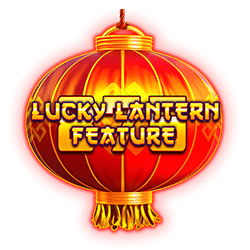 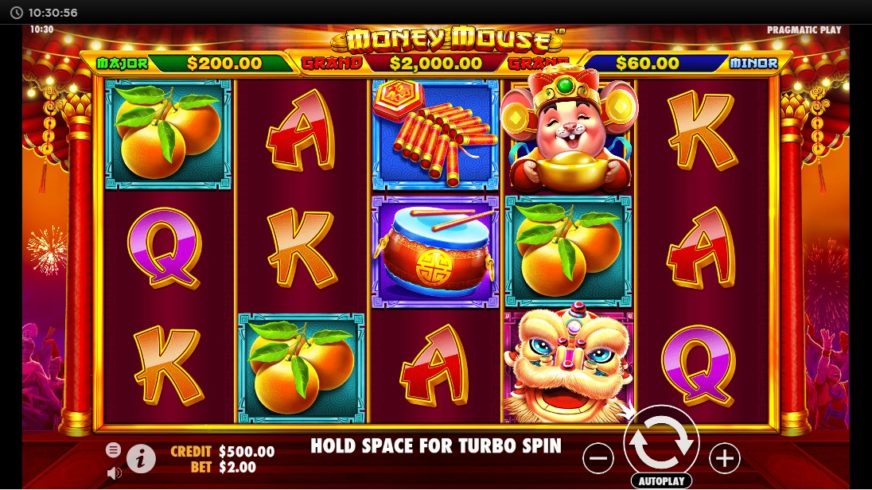 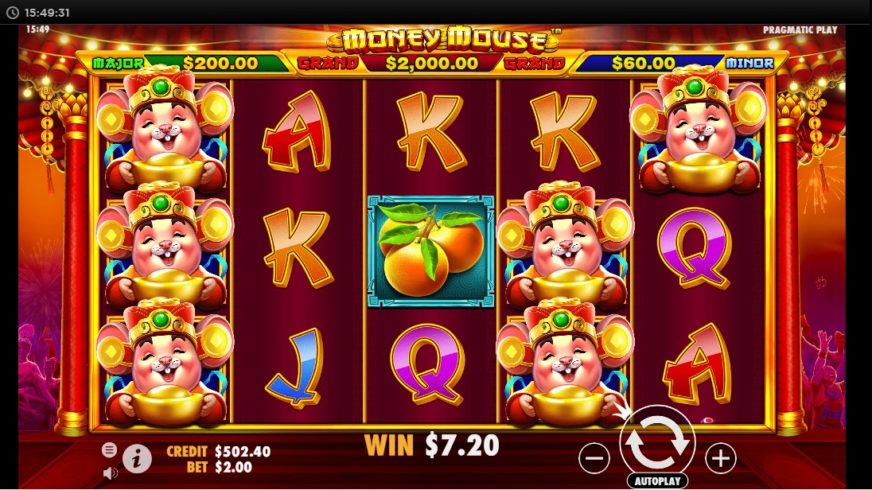 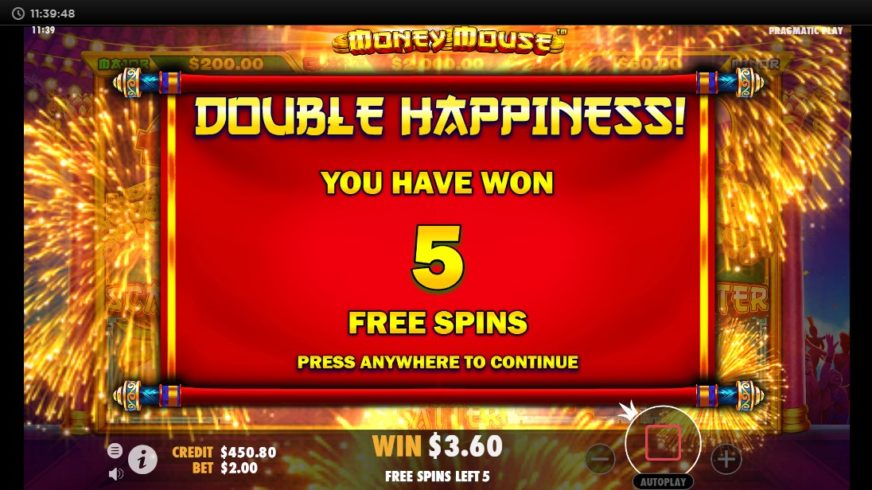 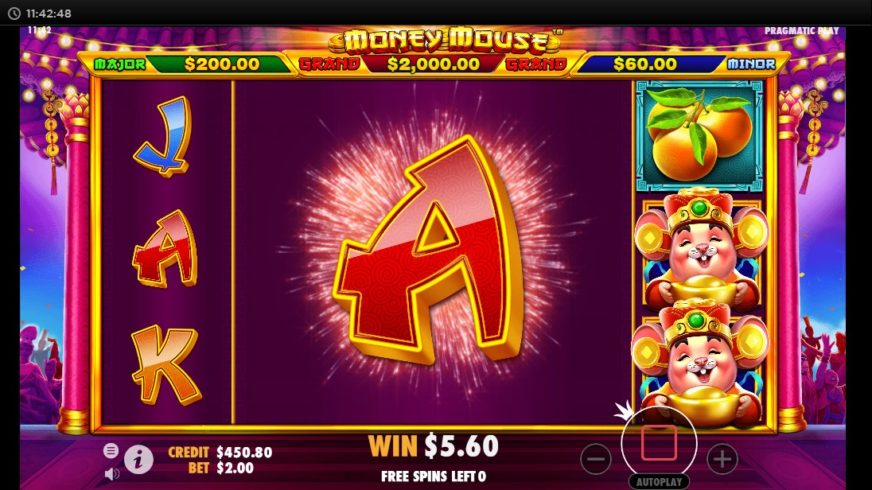 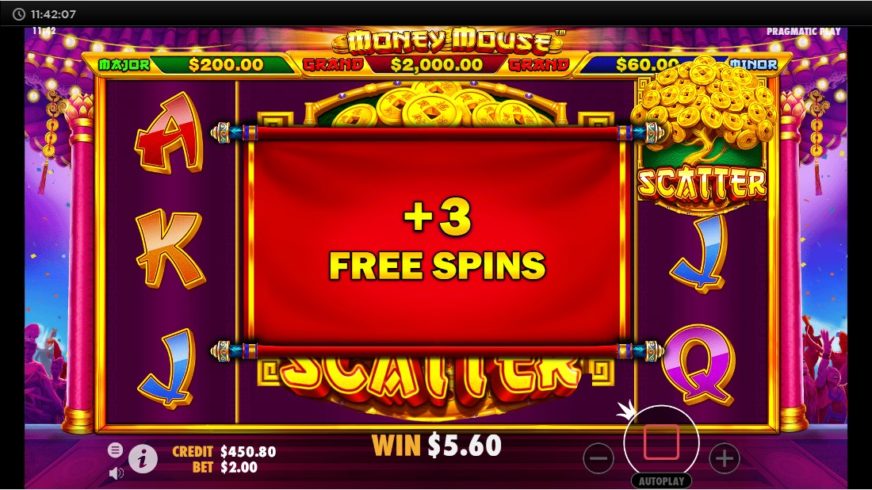 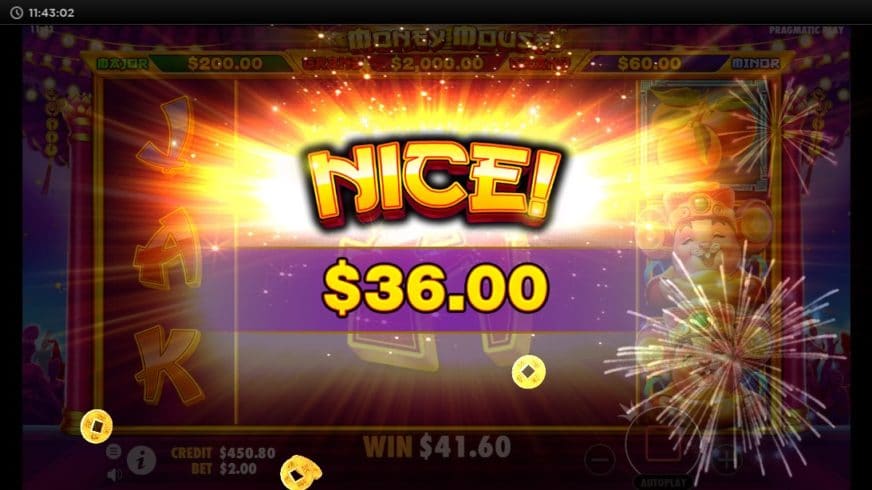 Can I play Money Mouse free slot?
Yes, clashofslots.com is the place to play demo Money Mouse with no sign up required. Any casino site partnering with Pragmatic Play would also provide free access to the demo mode.
Can I win real money on Money Mouse slot?
Yes, registered account with a gambling site would be the only option to play real money Money Mouse and get real winnings.
What is the best place to play Money Mouse?
When it comes to demo mode any trusted gambling operator or casino related site such as Clash of Slots would be fine. Once real cash gets invested legitimate operator with good reputation and top tier services must be selected. Best option would vary depending on one`s personal requirements.
Can I play Money Mouse slot on mobile phone?
Yes, this slot machine is mobile optimized and can be loaded on any device.
How to win playing Money Mouse?
This is a licensed title that generates random outcomes, and all you need is a good fortune. Check the paytable to find out how and how much you can win.
Top Pragmatic Play Casinos

In Lucie’s Cats slot you will find five reels, 20 pay lines and a lot of kittens. The volatility in Lucie’s...

PiggyPop is a slot with the already familiar PopWins mechanic, thanks to which the number of ways to choose changes...

In the Dwarven Gems Megaways slot, the playing field consisting of six reels and 117649 ways is located in one of the...

Das xBoot is an interesting slot with a wide variety of features, with five reels and up to 75,712 ways to win. Playing...

Big Boom Riches is a simple in terms of design, but quite interesting in terms of features, slot machine. The playing...

Treasure Mine Power Reels is an updated version of the Treasure Mine slot released 4 years ago. Compared to the first...

The Wild Harlequin slot machine has five reels and 10 paylines. You can play on all compatible devices from € 0.10 to €...

Book of Skulls is a pirate themed slot with five reels and 10 paylines. You can join an exciting adventure on a pirate...

The Expendables New Mission Megaways is an enthralling 6-reel slot machine with 117649 ways to win. Playing The...

So How Does Baccarat Work Baccarat is a game that may look intimidating at first but is actually simple. Even complete...

The Basic Rules of Blackjack To join a blackjack table and enjoy the experience you just need to know the basics and...