Take a look at the slot metrics to decide if that’s the perfect option for you. Release the Kraken offers 96.5% RTP, High volatility and x10000 win potential, max win. With a quite balanced math and the possibility of the considerable swings, the game is always engaging. Overall, it provides rich gaming experience.

Release the Kraken caters to those who love gameplay that has both conventional and experimental elements to it. When no feature gets triggered, the base mode is still interesting but as soon as wilds, scatters or other special symbols or features land on the screen, it gets to the whole new level.

The set of symbols presented in the game will help you with this: there are low pay and high pay images. The low pay ones are card names from J to A, while the high pay are yellow and blue fish, a turtle and a shark. The slot logo is the highest paying symbol and brings winnings 25 times your bet for a combination of 5 images on one line. Aside from the standard symbols, there are several special images in the Release the Kraken slot. They include the standard wild symbol (air bubble), which serves to replace all images, except for Bonus, Free Spins, or Chest Bonus – we will describe their specifics below.

Several random features can be triggered during the main gameplay. This happens after the Kraken’s tentacles appear on the playing field. Then three chests will appear in front of you, and the one you choose will determine which of the features is triggered. This could be the following:

The Sunken Treasure Bonus feature is triggered when a bonus symbol (ships) lands on reels 1 and 3, and the second bonus symbol (chest) lands on reel 5. After this, you choose one of the 3 chests to find out the amount of the cash prize. You will keep choosing until you get a chest saying Collect.

Roaming Kraken Free Spins is triggered when a bonus symbol (ships) appears on reels 1 and 3, and a symbol saying Free Spins lands on reel 5. The number of spins is not set for this feature – instead, a screen with chests will appear in front of you, hiding a different number of free spins. The selection continues until you get a chest saying Collect. You will have 40 paylines instead of 20 during free spins, and a growing win multiplier starting from x1 will be a nice bonus. Each time a wild lands on the playing field, it adds 1 to the multiplier and also remains on the reels and moves to different cells until the end of the round.

Release the Kraken Symbols and Paytable 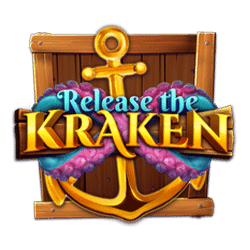 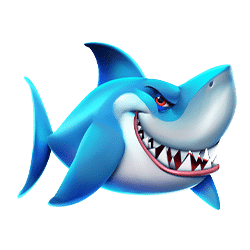 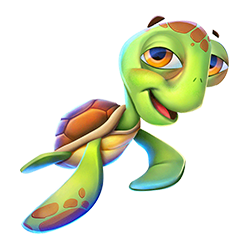 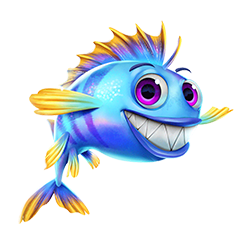 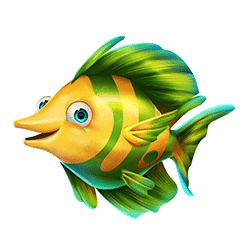 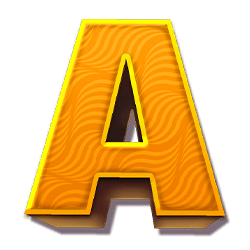 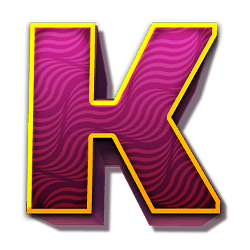 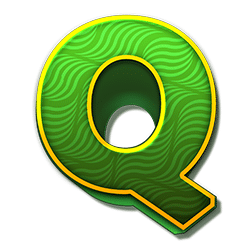 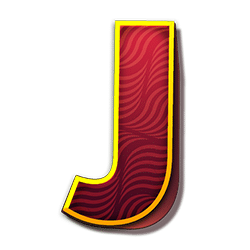 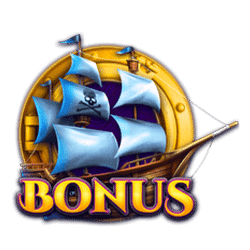 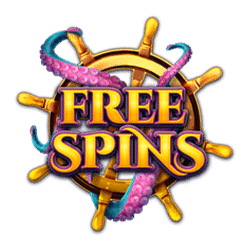 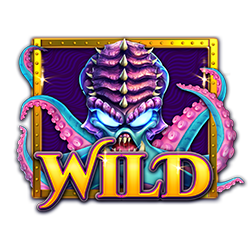 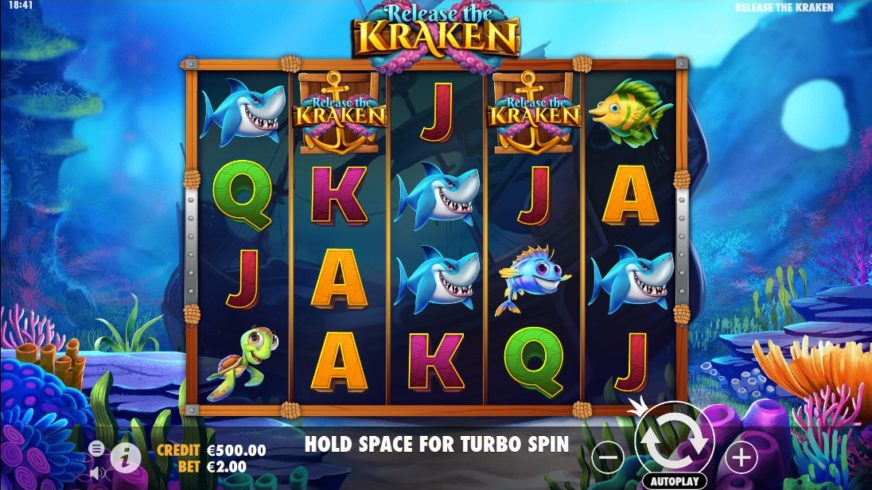 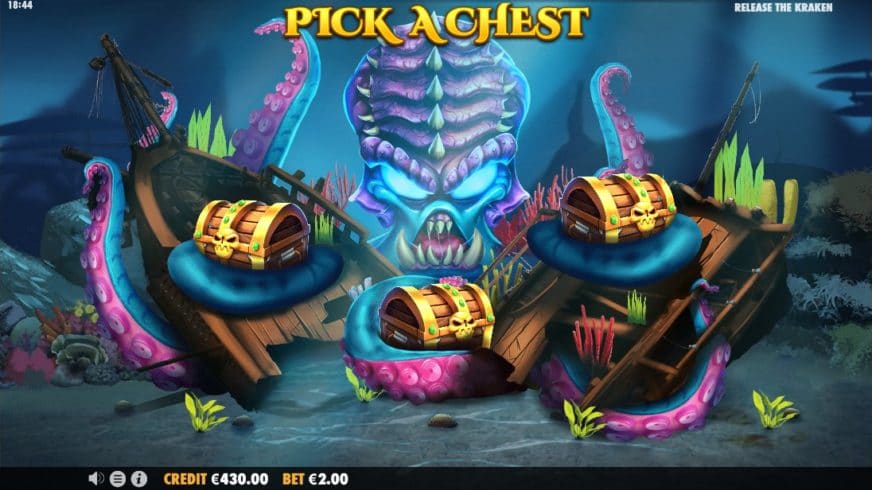 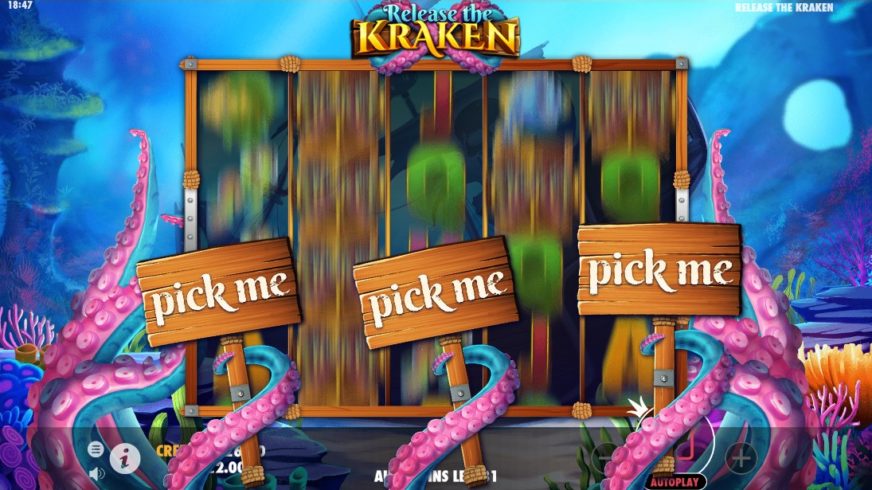 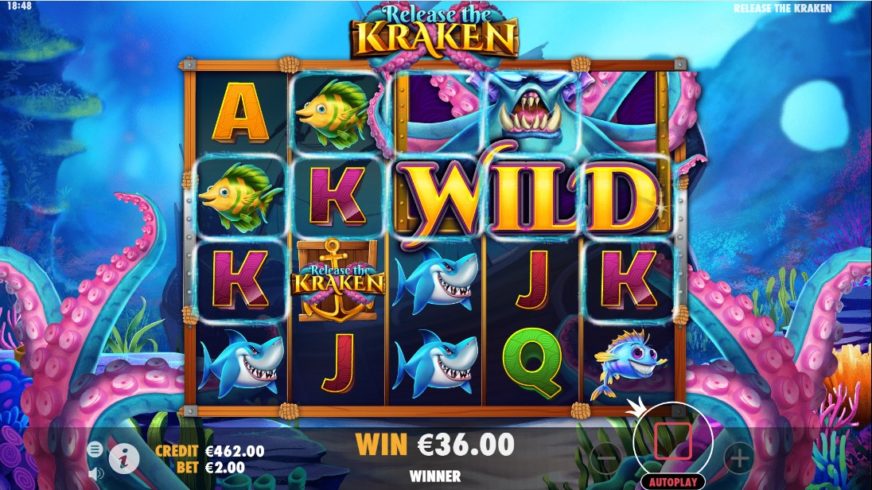