Northern Sky is the title developed by renowned studio Quickspin. Released on 13.02.2018 it became a hit among players for its exciting engine and high-quality artwork. This review describes all of its key characteristics that along with free demo mode available on Clash of Slots give a complete idea of experience you’ll be getting.

When playing the new Northern Sky slot for free, you immediately pay attention to the rather low number of winning lines. The new game has only 9 of them. However, this means that the minimum bet in the game will also be quite low. You can choose a bet from $0.10 to $100 per spin. The small number of lines is compensated by two bonus features, one of which is constantly active during the base game and allows you to get additional spins when winning combinations match. The second feature is the free spin bonus game.

The design of the Northern Sky slot has excellent graphics. The game screen is set against the background of a Scandinavian winter forest, and you will see symbols of forest animals on the reels. They are an owl, a wolf, a bear, and gold deer, as well as multi-colored diamonds. There is no wild symbol in the game, and the scatter symbol looks like a snow-covered mountain against the northern lights with the Bonus inscription on it.

The first feature we are going to consider is the Respin bonus. It is active in both the base and bonus free spin games. If the winning combination matches, the respin is activated. If there is the next identical symbol on the screen, the respin will be repeated. This will continue until the first loss, or as soon as the game screen is entirely filled.

The free spin bonus game can be activated in two ways.

In both ways, when you start the bonus game, you will get 10 free spins, where all crystal symbols will look like forest animals. This will allow you to get more profitable combinations. 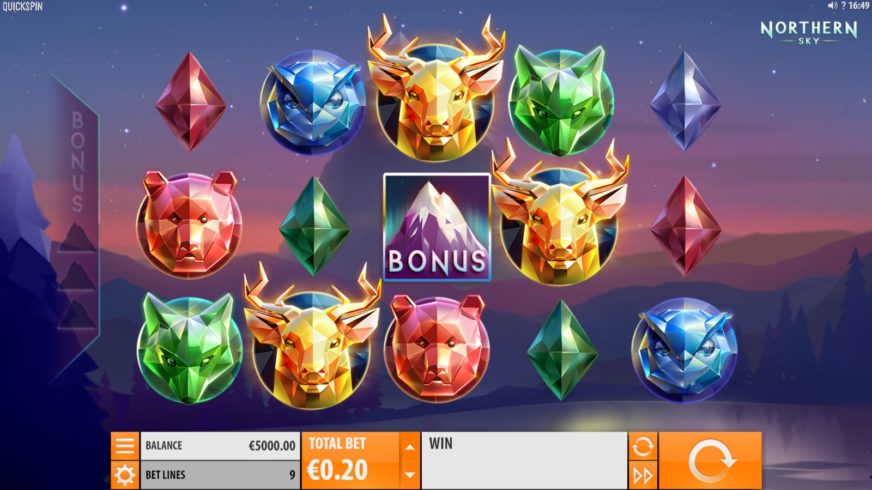 Can I play Northern Sky for free?
Yes, our site is the place to play demo Northern Sky with no sign up required. Any gambling site partnering with Quickspin would also provide free access to the test mode.
Can I win real money on Northern Sky slot?
Yes, registered account with a casino would be the only option to enjoy real money Northern Sky and hit real winnings.
What is the best place to play Northern Sky?
When it comes to test mode any trusted gambling operator or casino related site such as clashofslots.com would be fine. Once real cash gets invested licensed operator with solid reputation and premium services must be selected. Best option would vary depending on one`s personal requirements.
Can I play Northern Sky slot on mobile phone?
Yes, this video slot is mobile optimized and can be played on any device.
How to win playing Northern Sky?
This is a licensed video slot that generates random results, and all you need is a good luck. Look through the paytable to learn how and how much you can win.