For the developer of this level Polar Paws is a wonderful release that’s made it to the lobbies of many gambling sites. Polar Paws was launched on 26.11.2019 offering popular gameplay and high-quality renders. You can play free Polar Paws demo mode on Clash of Slots as a guest with no registration required.

Take a look at the slot metrics to decide if that’s the greatest choice for you. Polar Paws offers 96.84% return, Average risk level and x819 win potential, max win. With a pretty balanced math model and the possibility of the considerable swings, the game is always exciting. Overall, it delivers enjoyable gaming experience.

Polar Paws caters to those who prefer gameplay that has both conventional and experimental elements to it. When no bonus gets activated, the base mode is still interesting but as soon as wilds, scatters or other special symbols or features appear on the screen, it gets to the whole new level.

The wonder winter time has come, and the slot developers are adding slots with a corresponding theme to their portfolio on the eve of the Christmas holidays. Quickspin was no exception and presented a slot called Polar Paws to our attention, which will take you to the North Pole to get you know its inhabitants.

Once you launch the Polar Paws slot, you will see a magnificent winter landscape. This is not surprising, because the main action of the Polar Paws slot takes place at the North Pole, as mentioned above. You will see a family of polar bears to the left of the reels and an elf’s house on the right. On the technical part, Polar Paws is a 5-reel, 3-row, 25-fixed-payline slot. Winnings are awarded for 3 to 5 matching symbols on a line from left to right.

The symbols of the Polar Paws slot consist of card names from 10 to A and a family of four polar bears: two little bears, mom and dad. By the way, the dad is the highest paying symbol, and you will get a prize 10 times your bet for a combination of 5 such symbols on a payline. The Quickspin developers have added 3 special symbols to the regular ones in the Polar Paws slot.

The Free Spins feature is the main feature for those who play the Polar Paws slot for free. You need to collect 3 scatter symbols to access this round. The friendly elf will then reward you with an instant payout of 3 times your bet and give you access to 10 free spins with a feature called Bears Turn Wild.

You will see a scale located next to the playing field during this feature. It consists of three levels, where you will see empty slots and bears. Each time an elf appears on the reels, one slot on the counter will be filled (2 slots in case of 2 elves) — when you reach the image of a bear, you will see how this symbol turns into a wild and appears in this form during the remaining spins. You will turn the first bear into a wild after collecting 3 scatters. After collecting 5 more scatter symbols, you will see how another bear turns into a wild symbol and you get two free spins. Collect 5 more scatters, and the third bear will turn into a wild and you get two more free spins. In total, you can get three additional wild symbols during this feature, which will definitely add to your winnings.

In conclusion, it can be said that Polar Paws is an interesting slot that will be a great addition to Christmas slots and to the Quickspin portfolio, in general. 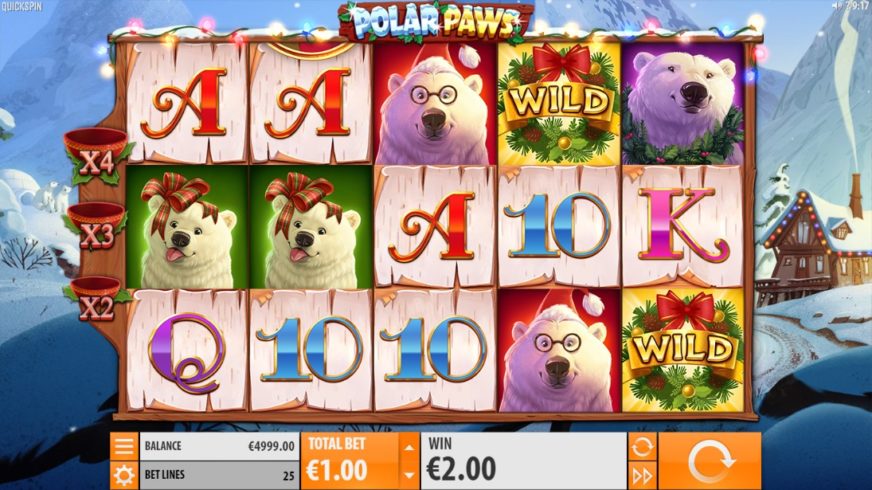 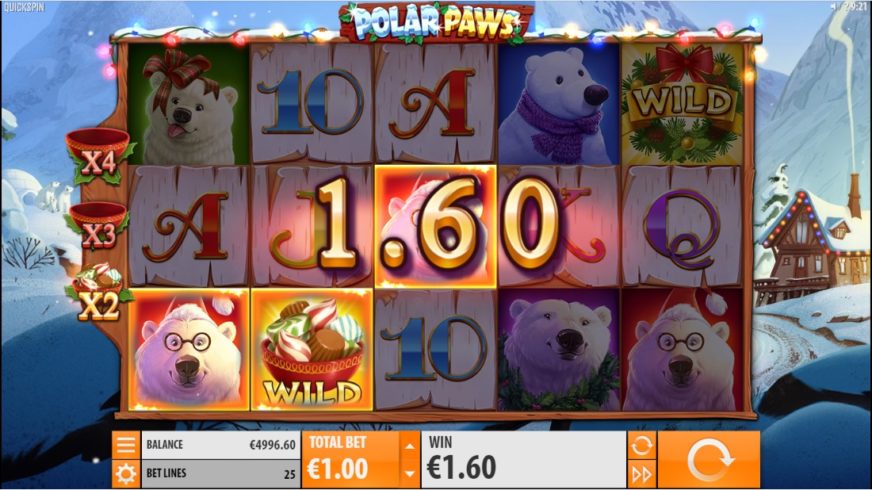 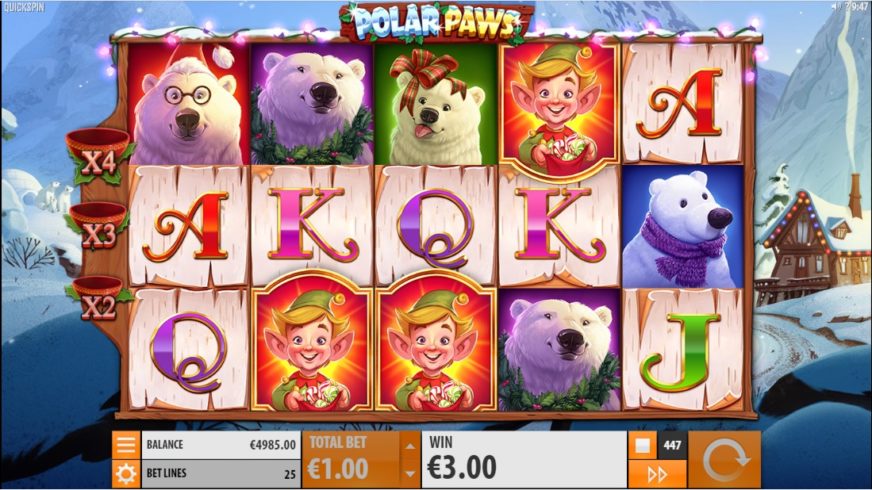 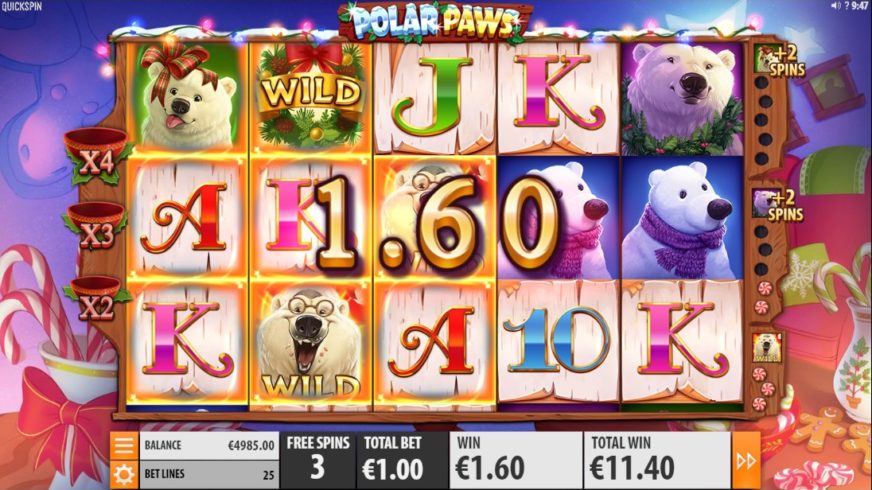 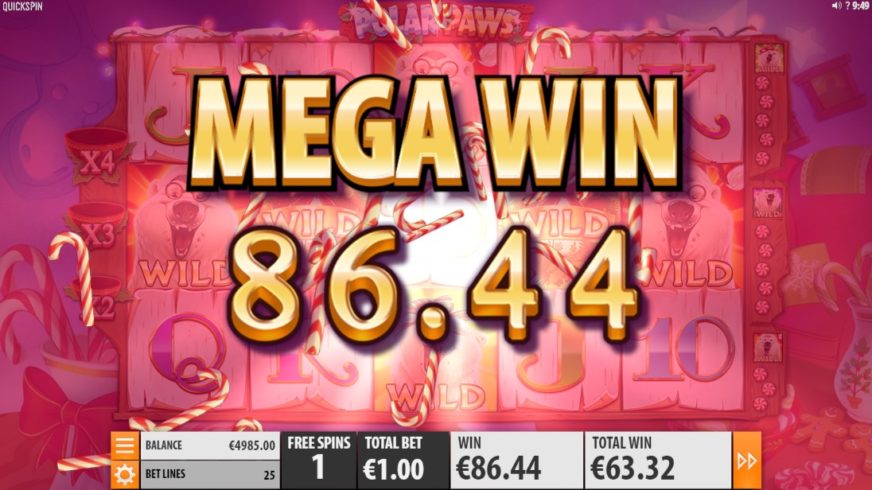 Can I play Polar Paws free slot?
Yes, our site is the place to try Polar Paws with no sign up required. Any gambling site partnering with Quickspin would also provide free access to the demo mode.
Can I win real money on Polar Paws slot?
Yes, registered account with a casino operator would be the only option to enjoy real money Polar Paws and hit real winnings.
What is the best place to play Polar Paws?
When it comes to free play any trusted casino or casino related site such as clashofslots.com would be fine. Once real money gets invested licensed operator with solid reputation and excellent services must be selected. Best casino would vary depending on one`s personal preferences.
Can I play Polar Paws slot on mobile phone?
Yes, this title is mobile friendly and can be played on any device.
How to win playing Polar Paws?
This is a licensed title that generates random results, and all you need is a good fortune. Look through the paytable to learn how and how much you can win.