For the studio of this caliber Carnival Queen is a great release that's made it to the lobbies of many casinos. Carnival Queen was released on 20.02.2019 offering exciting gameplay and high-quality graphics. You can play free Carnival Queen test mode on clashofslots.com as a visitor with no sign up required.

Take a look at the slot metrics to decide if that's the greatest option for you. Carnival Queen offers 96.1% RTP, Average dispersion and x22700 win potential, max win. With a quite balanced math and the possibility of the considerable swings, the game is always exciting. Overall, it provides strong gaming experience.

Carnival Queen appeals to those who prefer gameplay that has both classic and unique elements to it. When no bonus gets triggered, the base game is still interesting but once wilds, scatters or other special symbols or features appear on the reels, it gets to the whole new level.

When playing the Carnival Queen slot by Thunderkick on our website, you will visit New Orleans and join an unusual carnival that is loved not only by residents, but also by visitors.

Thunderkick developers were probably inspired by one of America’s most unbridled holidays – the Mardi Gras festival, which means “Fat Friday” in French. In technical terms, Carnival Queen is a Thunderkick slot with 6 reels and 4096 ways to win. The Carnival Queen slot can be played on any compatible device with a minimum bet of $0.10 per spin. When playing the Carnival Queen slot for free, you will discover the Avalanche feature, during which the winning symbols are replaced with new ones, and you get a better chance of getting a win in one spin. There are multipliers that increase with consecutive wins and a bonus game where you can win unlimited free spins.

When you open the Carnival Queen slot, you will experience the atmosphere of fun in full. Game reels are located on one of the streets of New Orleans, where the fancy-dress procession is led by the King and Queen of the carnival. The symbols on the reels consist of standard card names from 9 to A, 4 masked people, and a crown, which is the highest paying image – when 6 such symbols land on a payline, it will bring you 20 times your bet. The letter W is a wild symbol that replaces all images in the game, except for the scatter.

An overview of the special features of the Carnival Queen slot begins with the Avalanche feature, which can be often found among the slot developers lately. It is triggered every time a winning combination is formed – the symbols participating in it disappear, and new ones fall in their place from above. When this happens, you get more chances of forming combinations in one spin.

Overall, the Carnival Queen slot by Thunderkick is one of the best games from this developer: an interesting theme, the ability to get several combinations in one spin due to the Avalanche feature, and free spins with multipliers will make your game interesting, and most importantly profitable. 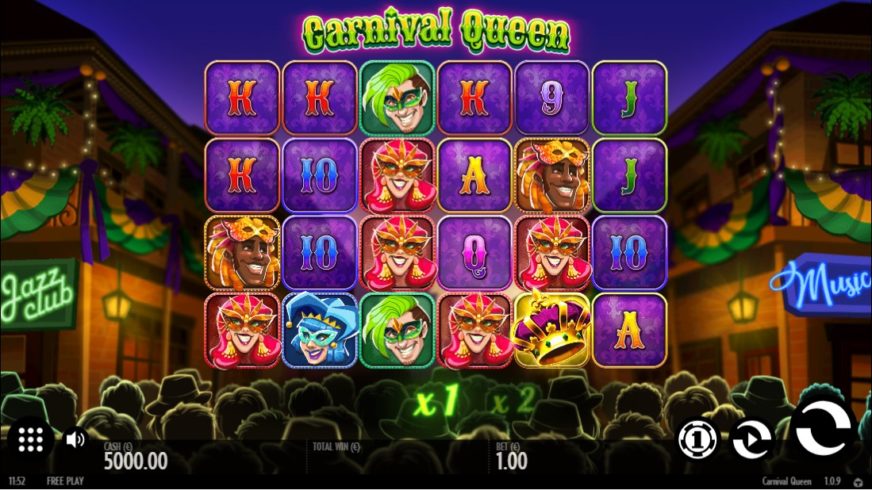 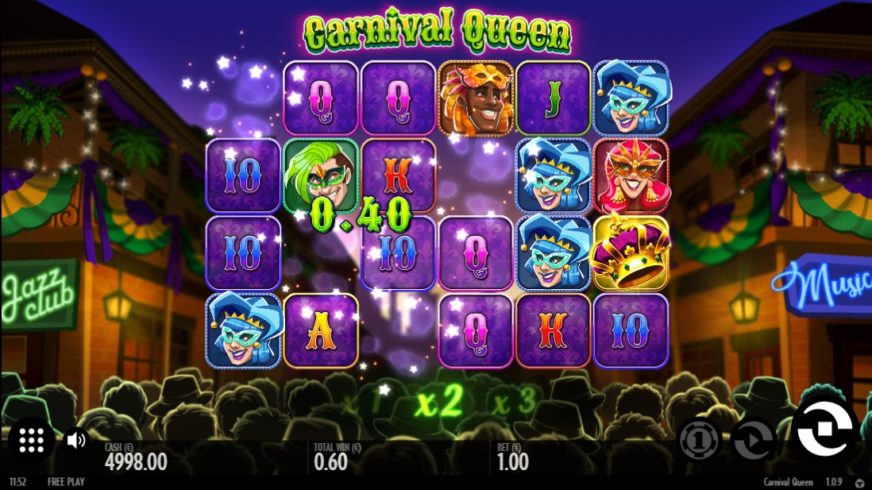 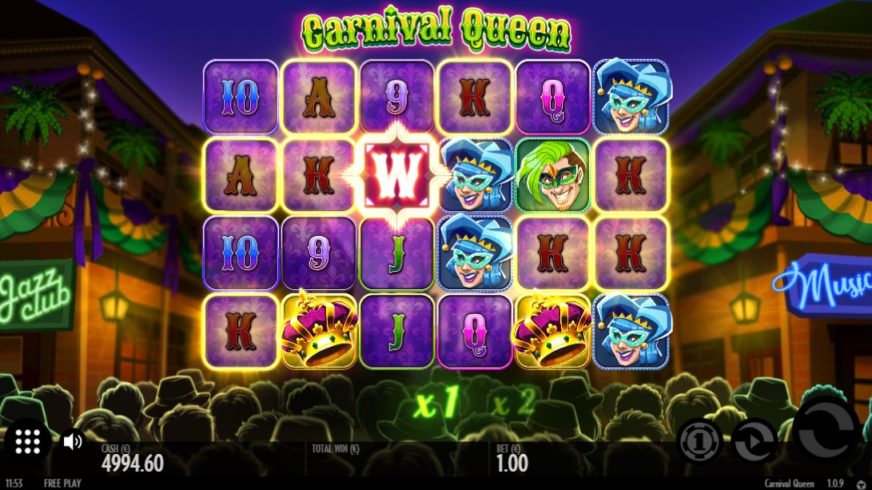 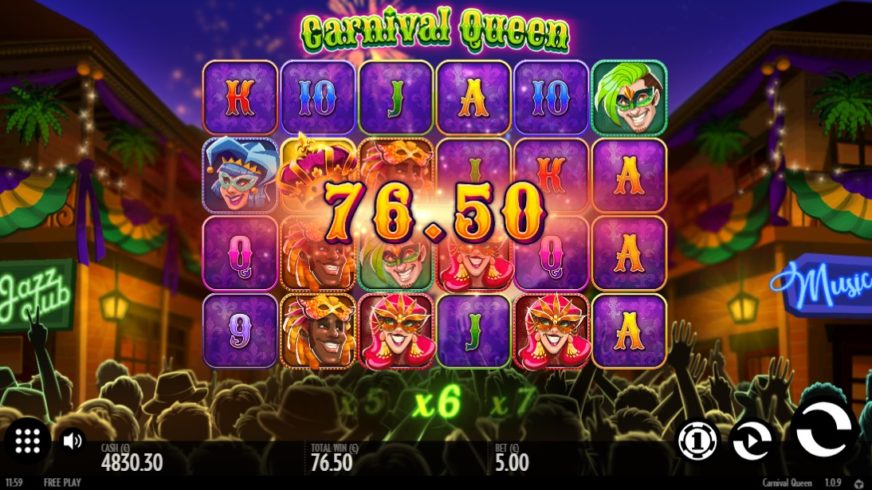 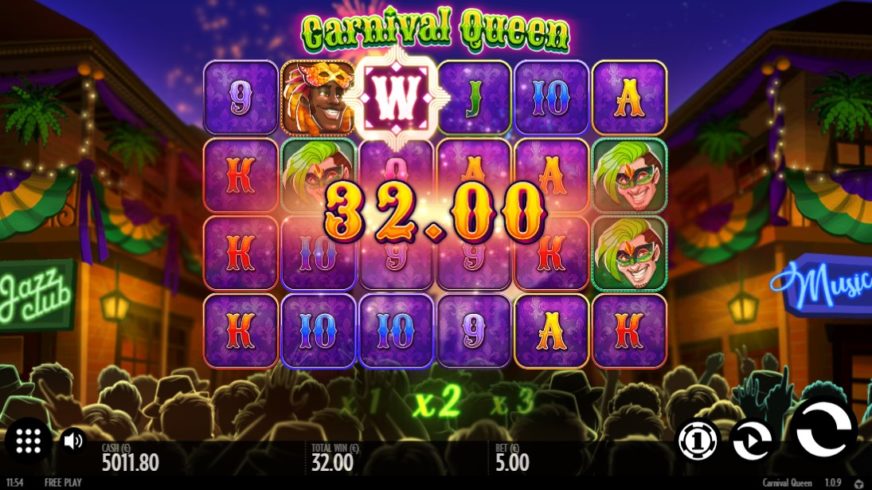 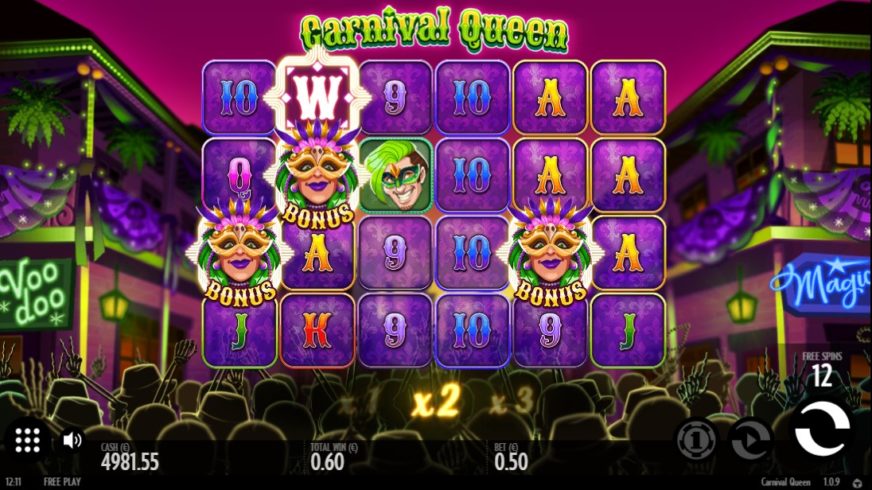 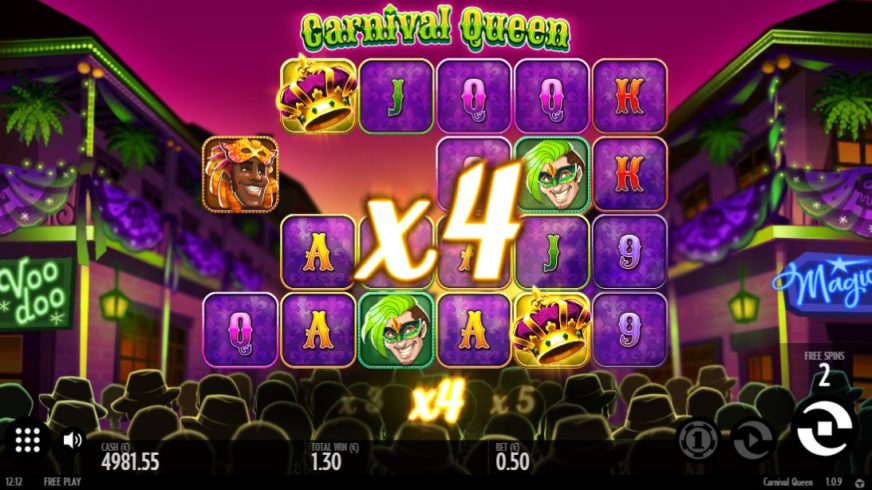 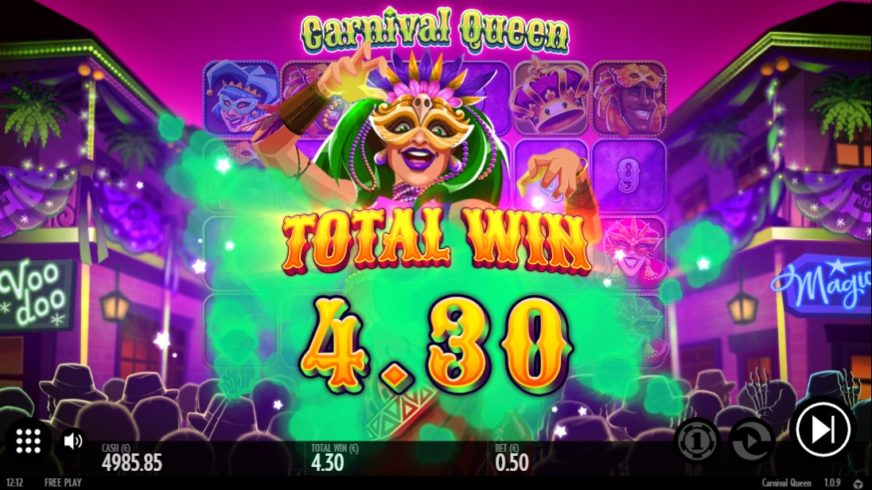 Can I play Carnival Queen for free?
Yes, Clash of Slots is the place to test Carnival Queen with no sign up required. Any gambling site partnering with Thunderkick would also give free access to the demo mode.
Can I win real money on Carnival Queen slot?
Yes, registered account with a gambling site would be the only option to play real money Carnival Queen and get real winnings.
What is the best place to play Carnival Queen?
When it comes to demo mode any trusted gambling operator or casino related site such as Clash of Slots would be fine. Once real cash gets invested licensed operator with good reputation and top tier services must be selected. Best option would vary depending on one`s personal requirements.
Can I play Carnival Queen slot on mobile phone?
Yes, this slot machine is mobile optimized and can be loaded on any device.
How to win playing Carnival Queen?
This is a certified slot machine that generates random results, and all you need is a good luck. Look through the paytable to find out how and how much you can win.
Top Thunderkick Casinos