Cosmic Voyager is the game developed by recognized studio Thunderkick. Released on 27.01.2021 it became an instant success among slot fans for its thrilling engine and fantastic artwork. This review explains all of its main characteristics that along with free demo mode available on Clash of Slots give a complete idea of experience you’ll be getting.

The Cosmic Voyager slot uses 5 reels, 3 rows, and 10 fixed paylines. Winning combinations are generated when the same symbols appear in sequence from left to right, starting from the first reel. In order to earn a winning, you need at least two expensive or three cheap symbols.

Like other games from Thunderkick, Cosmic Voyager can be played on all compatible devices. In Cosmic Voyager bets range from $0.10 to $100 per spin. The RTP is 96.14%, the variance is high, and the maximum payout per spin is x2500 of your total bet in the base game and x5000 during the free spins.

The Cosmic Voyager slot logo plays two roles at the same time – a wild and a scatter symbol. The wild, as always, can replace any other symbol in the game, and the scatter launches free spins when appearing in the required amount.

Features of the Cosmic Voyager slot

The expanding Symbols feature works when the first reel is completely filled with one type of symbols. After that, if on other reels there are symbols corresponding to those that appeared on the first one, and they also participate in generating a winning combination, you will see them expanding and completely filling the reel.

For example, if there is a mask on the first reel in all three cells and at the same time there are mask symbols on the second and third reels, you will see them expanding and giving you three reels completely filled with one symbol at once.

Free spins start when three or more scatter symbols (logo) appear in one spin. After that, you will be rewarded with 10 free spins during which expanding symbols will appear like in the base game. If the first reel is filled with one type of symbols and the required number of such images appears on other reels, all of them will expand, and you will get a payout.

The advantage of free spins is that their number is not limited. Every time you get at least three more scatters during the feature, you will get additional 10 spins (without limits).

Summarizing it up, it is necessary to say that Cosmic Voyager is a cool space-themed slot with expanding symbols that can bring you good prizes. 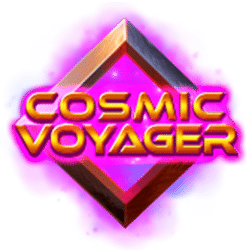 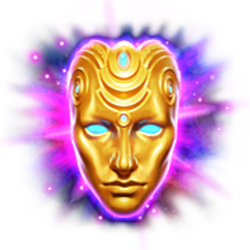 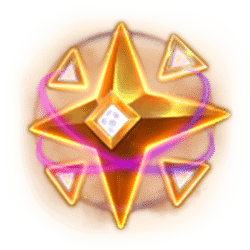 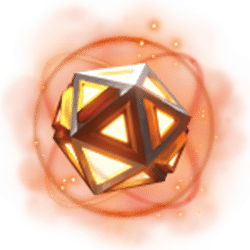 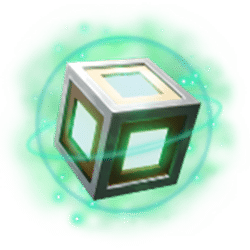 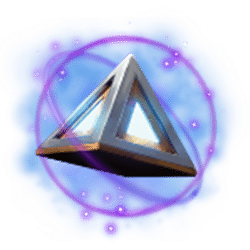 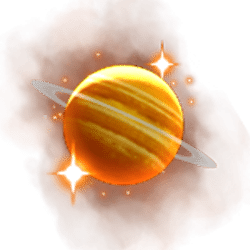 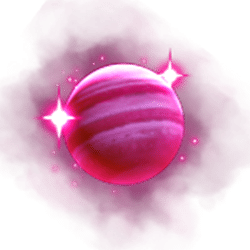 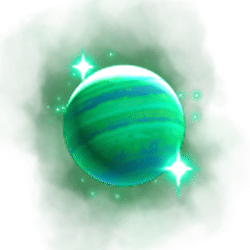 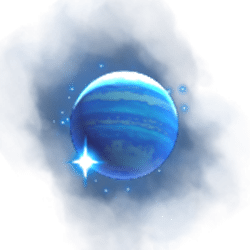 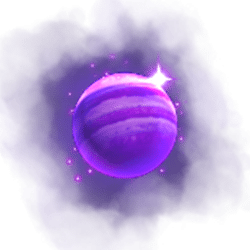 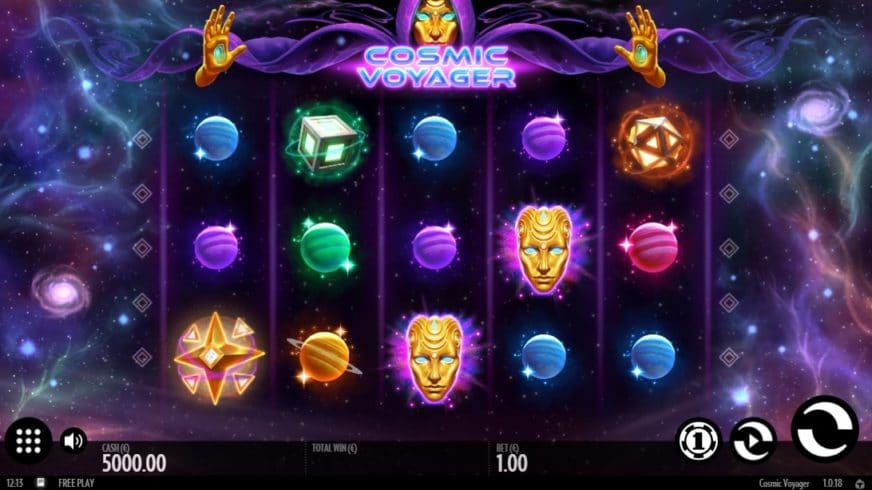 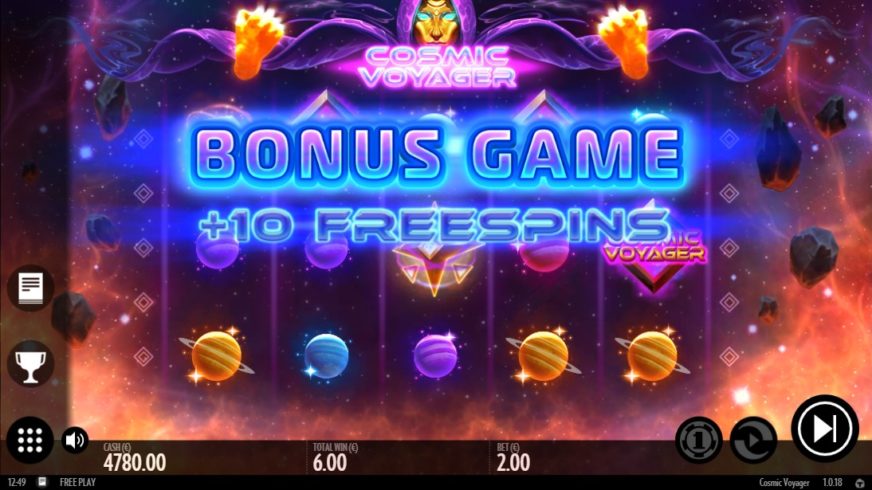 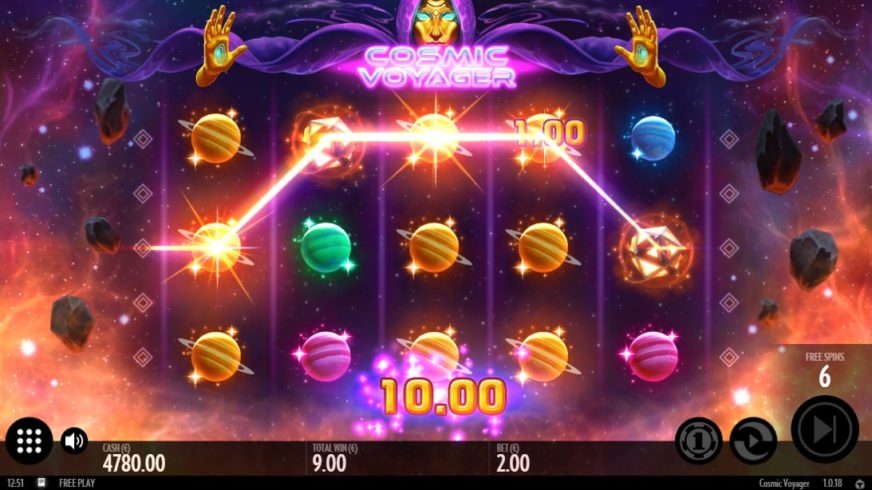 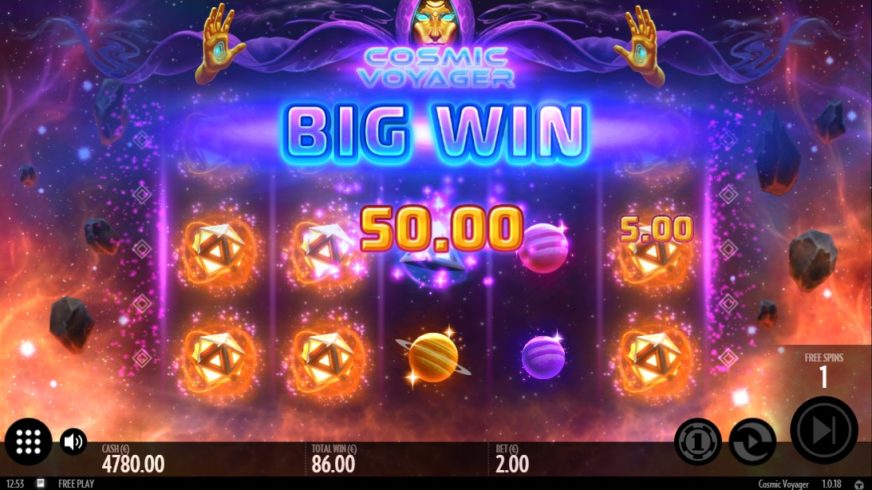 Can I play Cosmic Voyager free slot?
Yes, Clash of Slots is the place to test Cosmic Voyager with no sign up required. Any casino site partnering with Thunderkick would also offer free access to the demo mode.
Can I win real money on Cosmic Voyager slot?
Yes, registered account with a gambling site would be the only option to play real money Cosmic Voyager and hit real winnings.
What is the best place to play Cosmic Voyager?
When it comes to test mode any trusted casino or casino related site such as clashofslots.com would be fine. Once real cash gets involved legitimate operator with good reputation and premium services must be selected. Best option would vary depending on one`s personal preferences.
Can I play Cosmic Voyager slot on mobile phone?
Yes, this slot is mobile optimized and can be played on any device.
How to win playing Cosmic Voyager?
This is a certified video slot that generates random outcomes, and all you need is a good fortune. Look through the paytable to learn how and how much you can win.