Flame Busters is the game developed by renowned studio Thunderkick. Released on 17.05.2017 it became popular among gamblers for its thrilling engine and high-quality artwork. This review explains all of its key characteristics that along with free demo mode available on clashofslots.com give a great idea of experience you’ll be getting.

Thunderkick has prepared a slot with unusual graphics for its fans. The design of the new Flame Busters slot takes you back to the 80s when 8-bit video game consoles were at the peak of popularity. Pixel graphics, as well as music from those games, will help you go back in time and try to earn good wins with various functions in the slot.

The play field is located against the backdrop of a city, and the reels are located in a residential building. On the sides, there are fire escapes with firefighters standing in them. Flame Busters slot has five reels and 243 pay lines. Here you will feel like a brave firefighter who is ready to put out the fire in burning windows without fear. The symbols in Flame Busters include five coins with letters on them, and a wizard, a pirate, a robot, a fireman, and a goat. Wild (burning letter W) replaces all symbols except for the scatter, which is represented as a red fire bell.

Also pay attention to the Fire Drill and Free Spins labels, which are located at the bottom of the building. 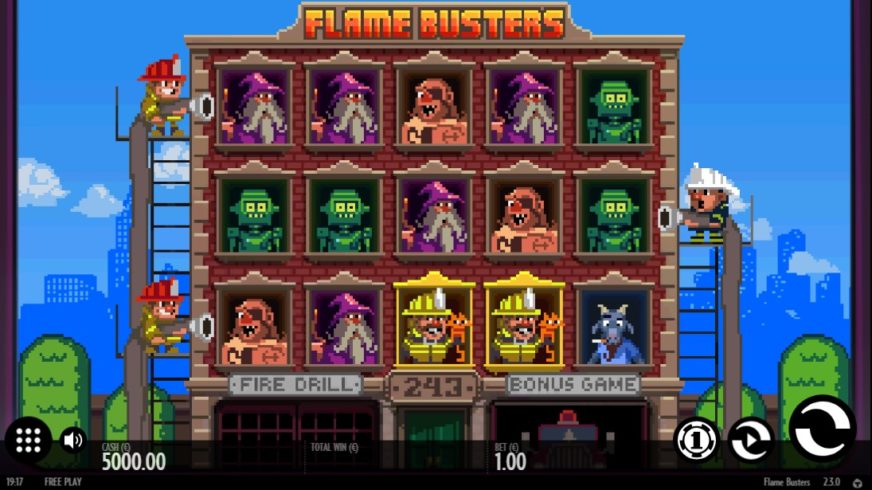 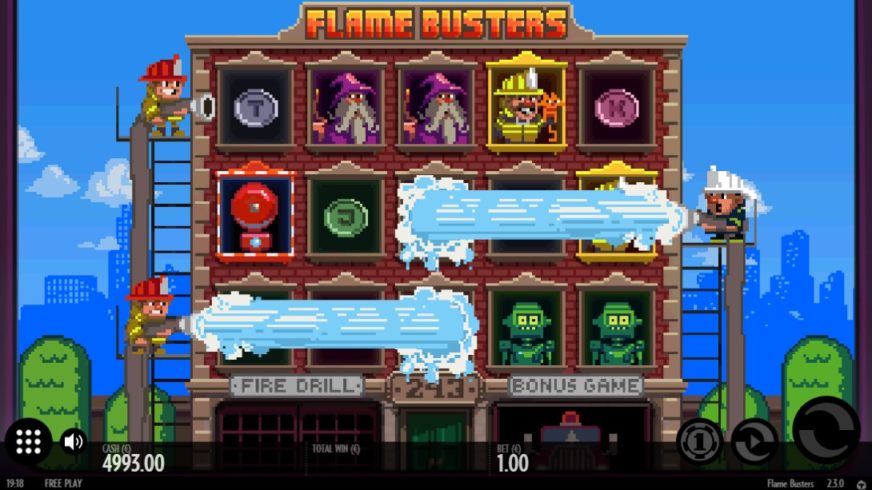 Can I play Flame Busters for free?
Yes, clashofslots.com is the place to play demo Flame Busters with no registration required. Any gambling site partnering with Thunderkick would also provide free access to the demo mode.
Can I win real money on Flame Busters slot?
Yes, registered account with a casino would be the only option to enjoy real money Flame Busters and land real winnings.
What is the best place to play Flame Busters?
When it comes to test mode any trusted casino or casino related site such as Clash of Slots would be fine. Once real money gets involved licensed operator with solid reputation and excellent services must be selected. Best casino would vary depending on one`s personal preferences.
Can I play Flame Busters slot on mobile phone?
Yes, this slot is mobile friendly and can be loaded on any device.
How to win playing Flame Busters?
This is a licensed online slot that generates random outcomes, and all you need is a good fortune. Look through the paytable to see how and how much you can win.