For the studio of this status Aldo’s Journey is a wonderful release that’s made it to the lobbies of many operators. Aldo’s Journey hit the market on 21.11.2019 offering popular gameplay and great visuals. You can play free Aldo’s Journey test mode on our site as a guest with no registration required.

Check out the slot metrics to decide if that’s the greatest option for you. Aldo’s Journey offers 96.1% theoretical return, High dispersion and x4205 win potential, max win. With a quite balanced math and the possibility of the massive swings, the game is always engaging. Overall, it provides powerful gaming experience.

Aldo’s Journey appeals to those who love gameplay that has both conventional and innovative elements to it. When no bonus gets activated, the base mode is still interesting but as soon as wilds, scatters or other special symbols or features land on the reels, it gets to the whole new level.

When this slot was announced in January 2019, its working title was Marco Polo, and it immediately became clear that the design and gameplay would be in line with the legendary Italian explorer and merchant. He left Venice, his hometown, in 1271, and began his journey across Asia. He reached China and stayed there for 10 years.

Therefore, it is not surprising that Yggdrasil Gaming has included four locations: Italy, Persia, Mongolia, and China in its game design. However, perhaps due to copyright problems, the main character was named Aldo, instead of the previously announced Marco Polo, and thus the slot itself was named Aldo’s Journey.

When you launch the Aldo’s Journey slot, the first thing that catches your eye is a bright and colorful design made in the cartoon style. The background looks very unusual, because the playing field is located simultaneously in four locations Aldo travels across (Italy, Persia, Mongolia, and China). As for the technical characteristics, the Aldo Journey slot has a 5×5 playing field and 65 lines that form your combinations.

The symbolism of the Aldo’s Journey slot has nothing to do with the theme. On the reels you will find card suits located on coins. They are followed by green, blue, purple, and red gems. There are two types of wild symbols in the game. The standard one is a gold icon with an inscription. The second one is Aldo himself. He is the Journey Wild and appears on every spin in the base game and on bonus features moving around the cells. Both wilds replace images. The medieval compass acts like the scatter and appears only on reels 2, 3, and 4.

The Free Spins feature is activated when there are scatter symbols (compass) on the second, third, and fourth game reels. After that, 7 free spins will be available to you. Please note that the playing field is divided into four territories and a cell located in the center. Depending on where Aldo is located during the launch of free spins, it will be determined which of the five locations will be selected for the free spins draw. There are five options available:

However, that’s not all. There is another very interesting feature called Wild Time. It is activated every time Aldo lands in the center cell during the base game. Then you can get from three to nine additional wild symbols, as well as a x2, x3, or x4 multiplier for your winnings. 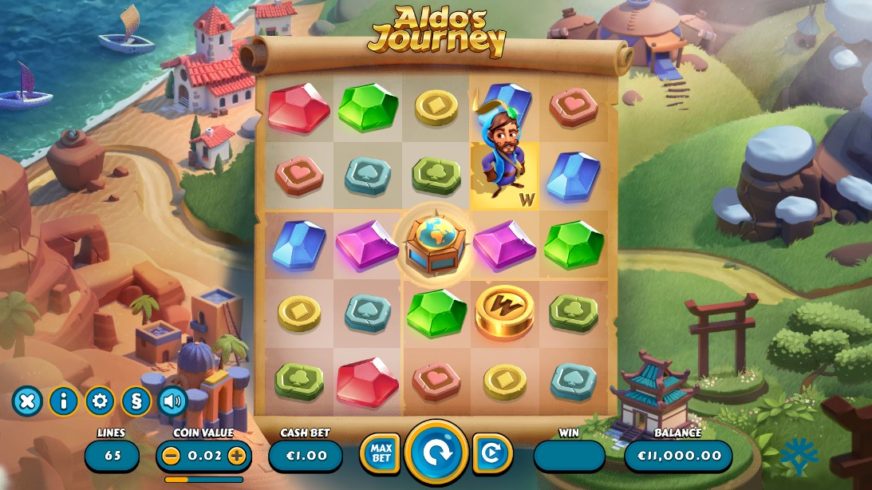 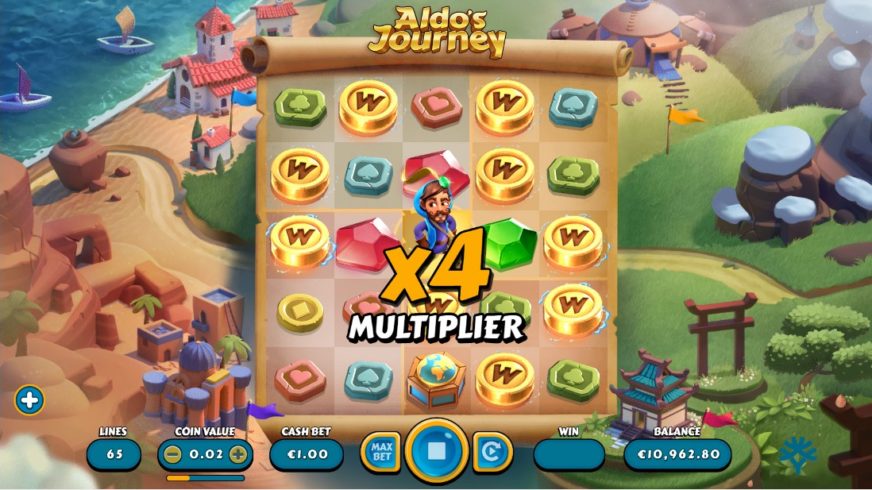 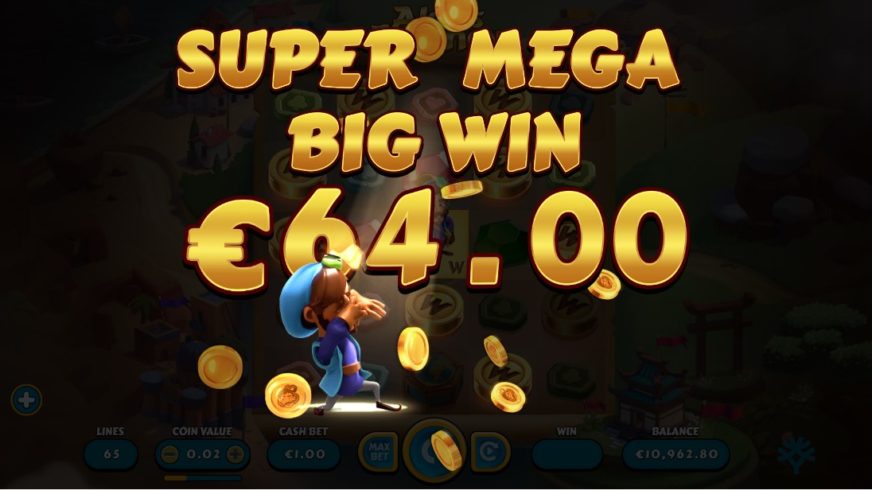 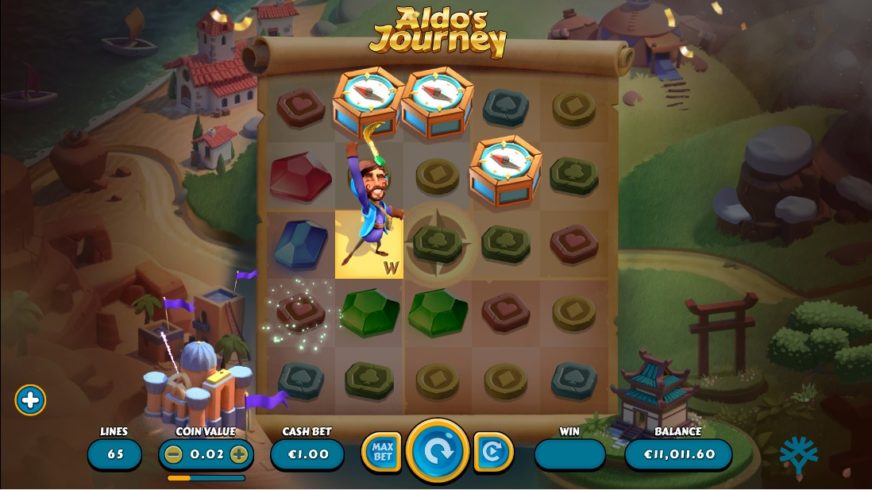 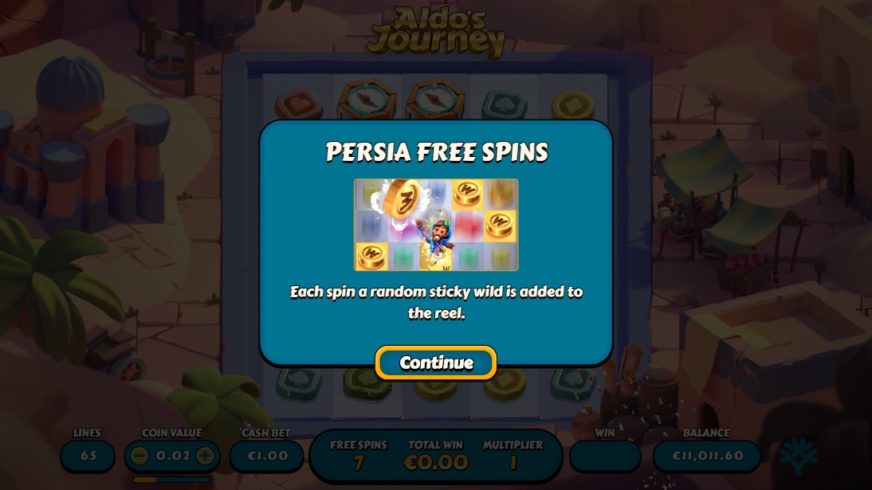 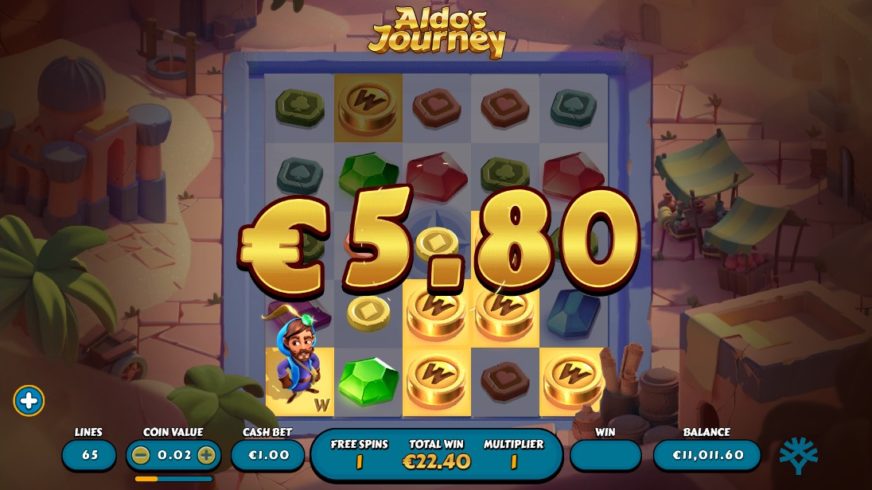 Can I play Aldo’s Journey free slot?
Yes, clashofslots.com is the place to test Aldo’s Journey with no registration required. Any gambling site partnering with Yggdrasil Gaming would also give free access to the test mode.
Can I win real money on Aldo’s Journey slot?
Yes, registered account with a gambling site would be the only option to enjoy real money Aldo’s Journey and hit real winnings.
What is the best place to play Aldo’s Journey?
When it comes to demo mode any trusted casino or casino related site such as Clash of Slots would be fine. Once real cash gets involved legitimate operator with solid reputation and premium services must be selected. Best choice would vary depending on one`s personal preferences.
Can I play Aldo’s Journey slot on mobile phone?
Yes, this slot machine is mobile optimized and can be played on any device.
How to win playing Aldo’s Journey?
This is a licensed slot machine that generates random outcomes, and all you need is a good fortune. Look through the paytable to find out how and how much you can win.