For the supplier of this caliber Dracula is a great slot that’s made it to the lobbies of a number of operators. Dracula was launched on 24.04.2015 offering exciting gameplay and superior graphics. You can play free Dracula demo mode on our site as a guest with no registration required.

Check out the slot metrics to decide if that’s the best choice for you. Dracula offers 96.58% RTP, Below average volatility and x400 win potential, max win. With a quite balanced math and the possibility of the massive swings, the game is always exciting. Overall, it delivers enjoyable gaming experience.

Dracula appeals to those who prefer gameplay that has both conventional and original elements to it. When no feature gets triggered, the base mode is still interesting but once wilds, scatters or other special symbols or features appear on the reels, it gets to the whole new level.

Dracula is a slot from NetEnt based on the 1931 film about the famous Count Dracula, which in turn was based on Bram Stoker’s novel “Dracula”. Technically, Dracula is a 5-reel, 40-payline slot. NetEnt has released this slot in partnership with Universal Studios, along with several of its other games titled The Invisible Man, Creature from the Black Lagoon, and Frankenstein.

The design of the slot looks very high quality. It is known that vampires can take the form of bats. When downloading the slot, you will see a small video in which a frightened girl runs away from a flock of bats, after which she falls and is attacked by a terrible vampire – Dracula. By the way, he will sit to the left of the panel throughout the game, watching you. Among the valuable symbols you will see: three characters – a woman and two men.

Among the cheap ones there are J, Q, K, and A. You will find two types of wild symbols in the slot, the first regular Wild is a large, bloody letter “W”, which appears only on reels two, three, and four. The second Stacked Wild Dracula and Lady appear stacked on reels two and four and activate the main function of the game in the form of free spins.

Bonus Features of the Dracula Slot

Bat Feature is a very interesting feature that is activated in random order. You will see how Dracula takes the form of a flock of mice that move to the panel, turning into the same random symbol.

When playing for free, pay attention to the fact that during free spins, just like in the main game, the Bat Feature function will be active, only this time Dracula will turn into bats at each spin. You can also get 2 additional free spins, for this you need the Stacked Wild symbol to appear on the third game reel during the function.

In general, Dracula is another great slot, in which you will find high-quality graphics, a familiar and well-known protagonist, as well as interesting bonus features. 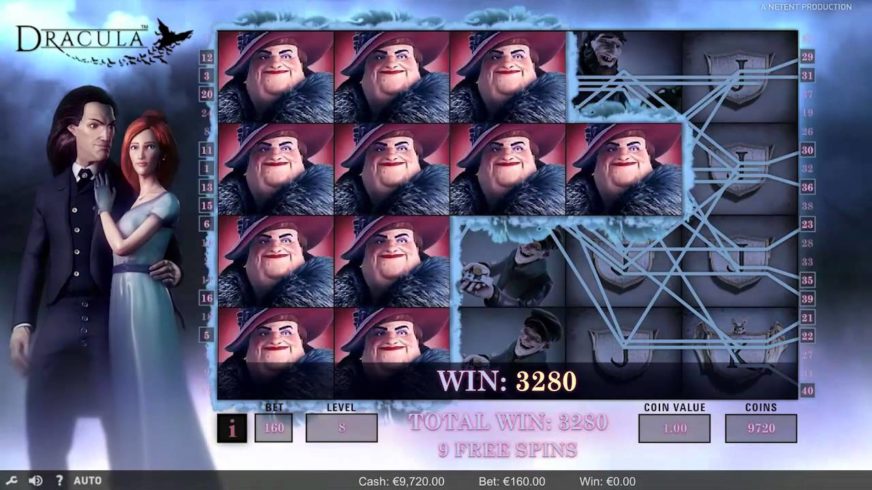 Can I play Dracula for free?
Yes, Clash of Slots is the place to try Dracula with no registration required. Any gambling site partnering with NetEnt would also provide free access to the demo mode.
Can I win real money on Dracula slot?
Yes, registered account with a casino would be the only option to play real money Dracula and land real winnings.
What is the best place to play Dracula?
When it comes to demo mode any trusted casino or casino related site such as clashofslots.com would be fine. Once real cash gets invested licensed operator with good reputation and top tier services must be selected. Best option would vary depending on one`s personal preferences.
Can I play Dracula slot on mobile phone?
Yes, this game is mobile friendly and can be loaded on any device.
How to win playing Dracula?
This is a certified online slot that generates random results, and all you need is a good luck. Look through the paytable to find out how and how much you can win.