When question marks land on the reels, players can expect anything to happen. It can either help hit a nice payout or become a big disappointment. Whatever the outcome, mystery symbols add another layer of thrill and entertainment. If you are a fan of mystery symbols slots, here’s the place to be. On this page, we have an extensive selection of free games featuring this element.

To help you find the best games that meet your requirements, there are multiple filtering options. They will allow you to refine slots based on your desired criteria. Also to explore are four collections we have on this page: Most Popular, Jackpot, Bonus Buy, and Megaways.

Regular symbols have a high chance of failing, but developers have twisted this feature to make it more lucrative. Some mystery symbols appear in stacks, others clone themselves or nudge and award multipliers. There are different feature variations and combinations with other bonus options.

What Are Mystery Symbols in Slots?

The more mystery symbols appear at the same time, the better the odds of landing a payout. Usually, they do not turn into bonus icons and scatters, but there are some exclusions such as Razor Shark.  However, they typically can turn into wilds, and when wilds are revealed, this is potentially the most lucrative scenario.

Unlike other features, the benefit of the mystery symbols isn’t guaranteed. It can be a key to winning big, but at the same time can be a huge disappointment when players almost land a win but miss it. The presence of the mystery symbol adds anticipation and makes the gameplay more thrilling.

Even though the mystery symbol isn’t that common in online slots like wilds and scatters, there are still many games featuring it. So, you’ll have an extensive and versatile collection to choose from. Uncomplicated classic titles are less likely to include this symbol so video slots are your option. On this page, we offer a few mystery symbols slots collections you can check out.

Uncover some of the best slot machines by exploring our Most Popular collection. You’ll find games produced by the greatest developers and other talented studios. All-time favorites are there along with the latest releases. Mystery symbols take a central role in some of the slots but are usually used to add extra flavor to the gameplay.

The xWays engine that is used in East Coast vs West Coast is built on the mystery symbols concept. xWays symbols reveal the same symbols and expand the reel height. There’s another exciting twist to this feature, Infectious xWays. After symbols are revealed and reels expanded, the same happens to all similar symbols on the reels – they expand to the same size.

East Coast vs West Coast is an outstanding slot that has many more entertaining features to enjoy: Linked Reels, Multipliers, Nudging Wilds, three types of bonus games and a feature buy option. You can pay 80x for 8-10 spins or 420x for a more advanced game consisting of 12 free spins. Similar to this slot is Punk Rocker. Both feature xWays engine and are produced by Nolimit City.

Push Gaming has designed an amazing slot that is centered around the Mystery Stacks. Mystery symbols will always show up in stacks and activate the Nudge & Reveal feature that awards multiple opportunities to land a win, because every time the stacks nudge, they reveal new symbols. Mystery Stacks can also reveal Golden Sharks to trigger another bonus feature, Razor Reveal. It awards instant wins, multipliers, and scatters. Moreover, during free spins, second and fourth reels accommodate Mystery Stacks and every time stacks nudge, the multiplier grows +1.

One of the early cluster slots, Aloha! Cluster Pays, features mystery symbols that transform into the adjacent symbol to ensure the best payout is awarded. It’s a great slot that offers free spins, Sticky Win Re-spins, and stacked symbols. The mystery symbols have a more positive impact here because it’s a cluster slot and combinations don’t have to start from the leftmost or rightmost reel. It’s also great that mystery symbols turn only into adjacent symbols increasing the chances of winning. 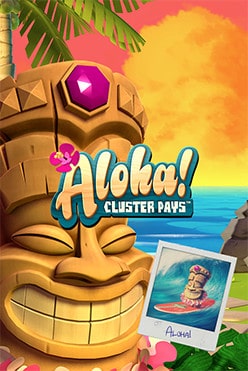 Big Bass Splash is another fishing-themed slot from the developers of Reel Kingdom that has expanded the collection of...

Boilin’ Pots is a slot machine in which you have to brew a strange potion from the same strange ingredients....