For the studio of this rank Golden Grimoire is a remarkable game that’s made it to the lobbies of many gambling sites. Golden Grimoire was released on 22.02.2019 offering exciting gameplay and superior graphics. You can play free Golden Grimoire demo mode on our site as a visitor with no registration required.

Check out the game metrics to see if that’s the best choice for you. Golden Grimoire offers 96.44% return, Below average dispersion and x200 win potential, max win. With a quite balanced math model and the possibility of the massive swings, the game is always exciting. Overall, it delivers rich gaming experience.

Golden Grimoire appeals to those who appreciate gameplay that has both classic and experimental elements to it. If no bonus gets triggered, the base mode is still entertaining but as soon as wilds, scatters or other special symbols or features show up on the reels, it gets to the whole new level.

Golden Grimoire is a fairly low variance slot released by NetEnt. On the technical part, the game has 5 reels and 40 fixed paylines. When playing for free, you can activate a special mystical symbol, which can transform into absolutely any symbol in the game, including the wild: if the symbol that appears matches the symbol dropped on game reel 1, the whole row also takes the value of this symbol, so you get a chance to fill the playing field completely and get decent winnings. The game also includes a free spin feature with fixed wild symbols, which can appear at each free spin on the last four reels.

The Golden Grimoire slot is designed in an ancient magic style based on the golden book of spells. The game screen is set against the background of the magician’s mysterious room with burning candles, bubbles with magic potion and magic signs. When playing the Golden Grimoire slot for free, you will see magic symbols. Insect gems are top value symbols that bring higher payouts.

Low value symbols are playing cards of spades, diamonds, hearts and clubs. The main symbol is a spider depicted on a red ruby; five matching symbols will bring a win equal to 5x of the selected bet for each winning combination. The wild symbol is a golden skull; the scatter image activating the free spin function is a magic triangle, it can only appear on odd game reels.

Pay attention to a special image while playing the Golden Grimoire slot for free in regular mode – it’s a book of spells, which can appear only on game reels 3, 4 or 5. It is transformed into any symbol of the game when dropped out in a random order and unfolds – that is, it completely fills the entire reel.

Pay attention to reel 1 as well, as it will be highlighted in yellow: if there is a symbol on it that coincides with the changed mystical symbol, then the whole row will take this value, so you can fill the entire game reel.

The free spins feature is triggered if a magic triangle symbol appears on reels 1, 3 or 5 – you get 8 free spins, where mystical symbols will take on a value on Sticky Mystery and appear starting from game reel 2. Besides, the emerging Sticky mystery remains in place for all the remaining free spins, which will allow you to collect higher combinations.

Overall, the Golden Grimoire slot has nice graphics and stunning visual effects – however, low variance will surely put off many players, because even the highest combination can only bring 200x the chosen bet. 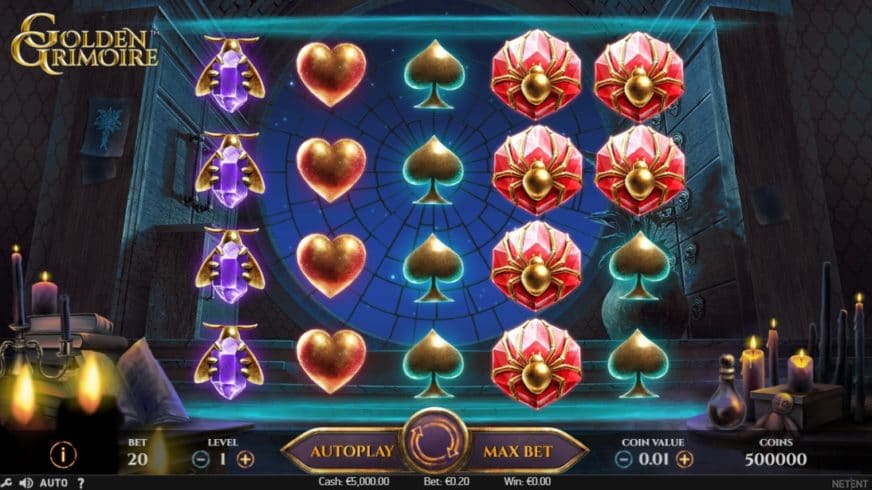 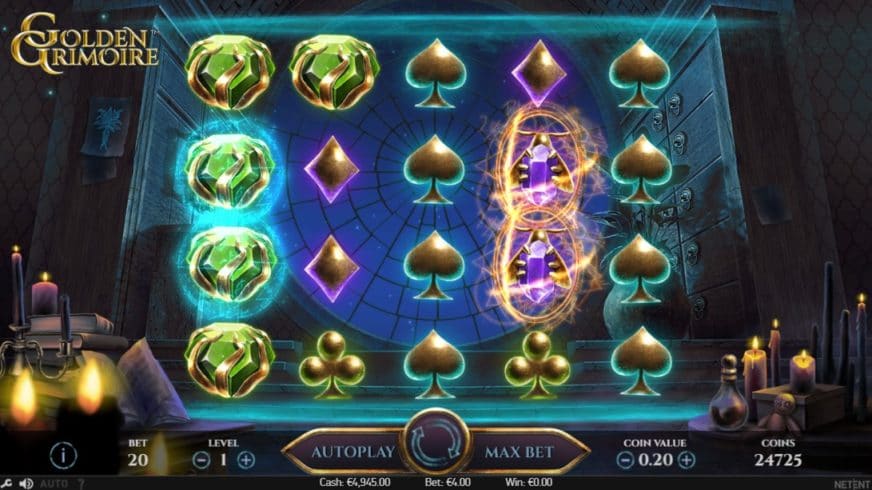 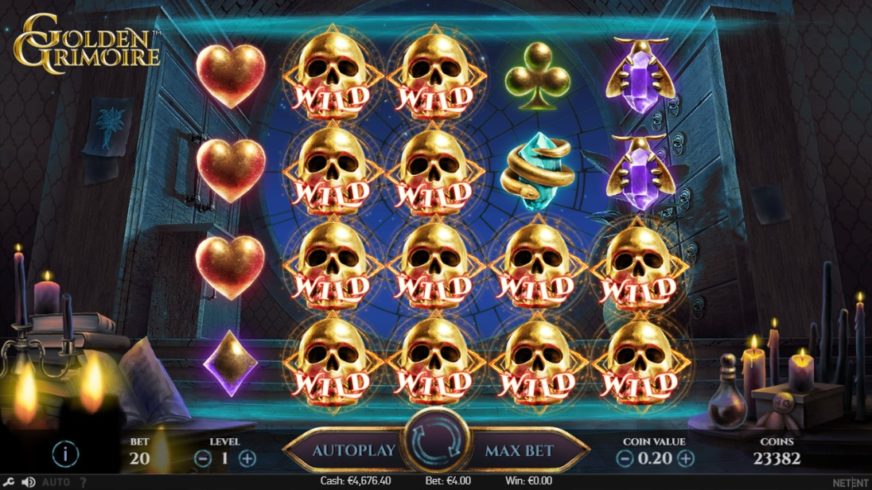 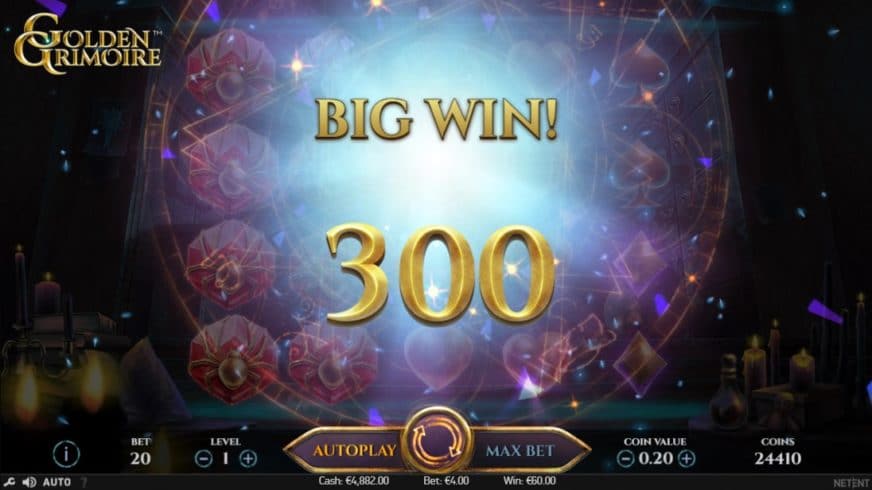 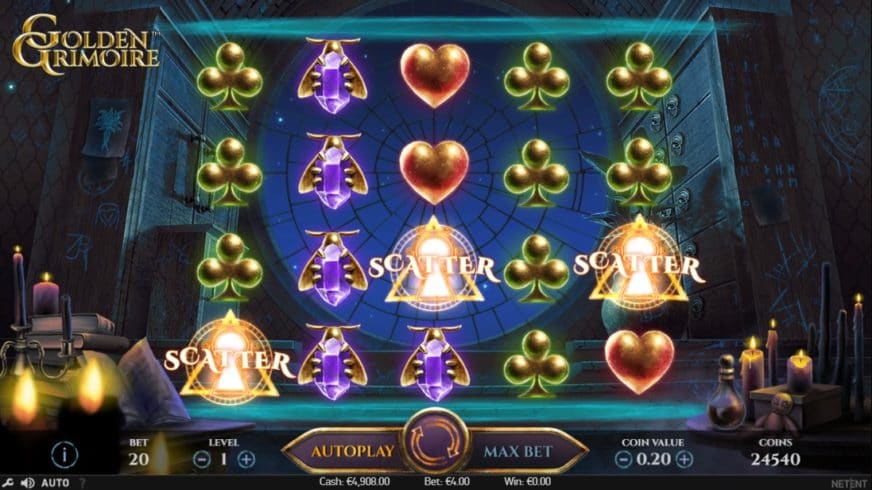 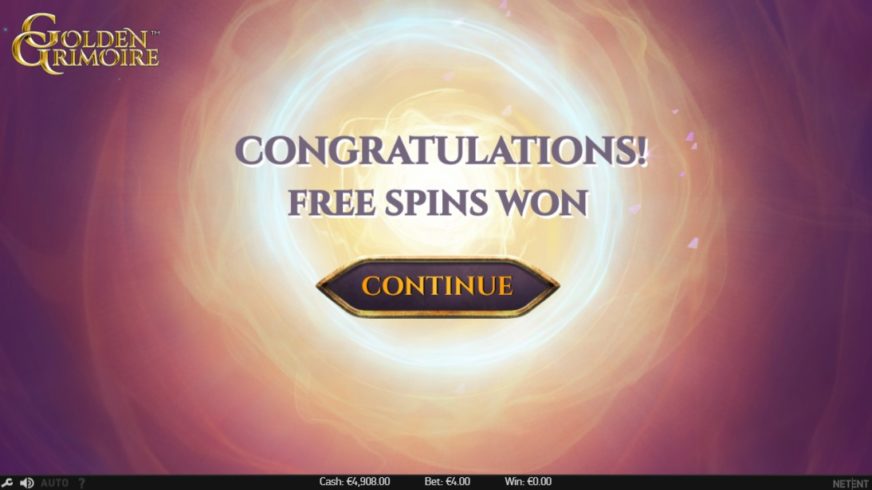 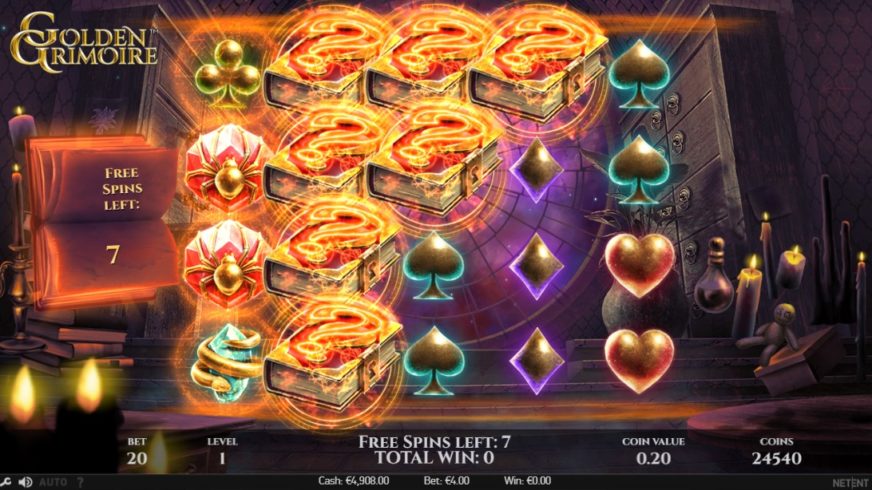 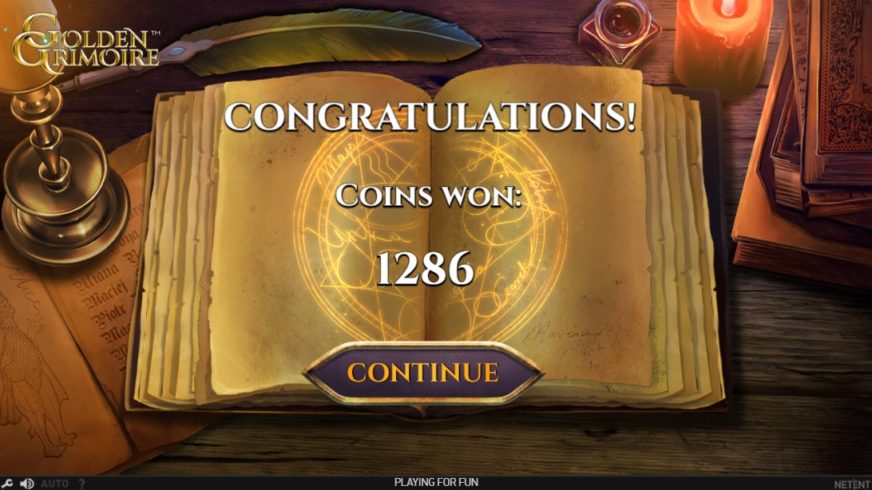