Land of Zenith is the slot developed by recognized studio Push Gaming. Released on 26.02.2021 it became a hit among gamblers for its thrilling engine and fantastic artwork. This review describes all of its key characteristics that along with free demo mode available on Clash of Slots give a complete idea of experience you’ll be getting.

Land of Zenith is another high-quality slot that has expanded the portfolio of Push Gaming. While playing the Land of Zenith slot, you will go on an exciting journey in the company of sky pirates and help them explore the islands in order to find treasures.

The Land of Zenith slot features 6 reels, 4 rows, and 30 fixed lines. Winning combinations are formed by landing the same 3, 4, 5, or 6 symbols on any of the paylines. Symbols must be placed starting from the leftmost reel.

You can join the sky pirates and explore the islands with them by choosing a rate from 0.10 to 100 euros per spin. You can play the Land of Zenith slot in two modes – manual and automatic. By choosing the latter, you can start from 5 to 100 automatic spins. In addition, a turbo mode can be launched in the Zenith Land slot for an accelerated gameplay. The RTP in the Land of Zenith slot is 96.29%, the variance is high, and the maximum winnings can exceed your bet 21.003 times in a single spin.

Disc Mechanism. During the base game, the Disc Mechanism is visible and serves to trigger features. The mechanism consists of three independently moving, circular discs; an inner, middle and outer disc.

During a spin, if one of the grooves on each disc aligns with each other to form a full groove, the Bouncing Mystery Feature will be immediately triggered. At the start of each spin, there is a chance for the Disc Mechanism to turn gold. If the Disc Mechanism is golden during a spin where the three discs align, the Hypermode Free Spins Feature is immediately triggered instead of the Bouncing Mystery Feature. 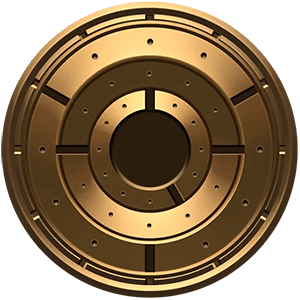 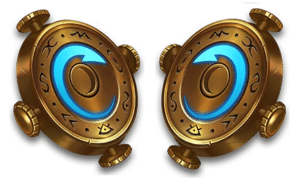 Mystery Symbols are special symbols created during the Bouncing Mystery Feature that all reveal the same symbol.

When the feature is triggered, the player is awarded a Respin. An Orb will shoot off from the center of the reels in a random direction. Every time it collides with the edge of the reels, it creates a Mystery Symbol on the position nearest to where the collision occurred. There is then a chance for it to either disappear or to split into two Orbs and rebound.

When two Orbs collide they will disappear, creating five Mystery Symbols in a cross shape, centred on the position nearest to the point where the collision occurred.

When there are no more Orbs in view, the reels then land and all Mystery Symbols will reveal the same symbol, chosen at random.

When the Feature is triggered, the player is awarded 20 seconds of Free Spins, displayed on a Timer. The Timer will begin counting down to 0 when the first Free Spin begins.

Each time the player lands a Wild during the Free Spins, the speed at which the reels spins and lands increases, and it partly fills the Retrigger Meter displayed next to the reels.

Completely filling the Retrigger Meter causes a Retrigger. Retriggers resets the Timer to 10 seconds. There is no limit to the number of times the Free Spins Feature can Retrigger.

The first 4 Retriggers the player accomplishes will also remove symbol types from the reels. Each Retrigger will remove the current lowest value symbol from the reels for all subsequent Free Spins.

Land of Zenith Symbols and Paytable 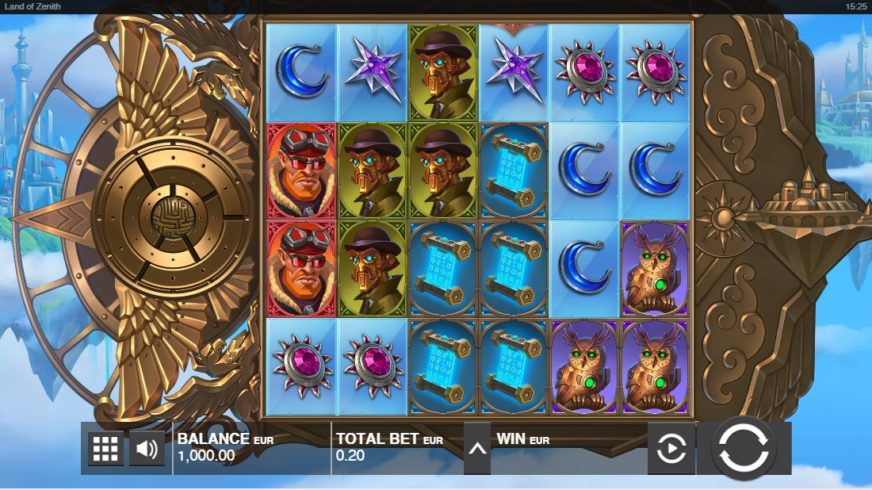 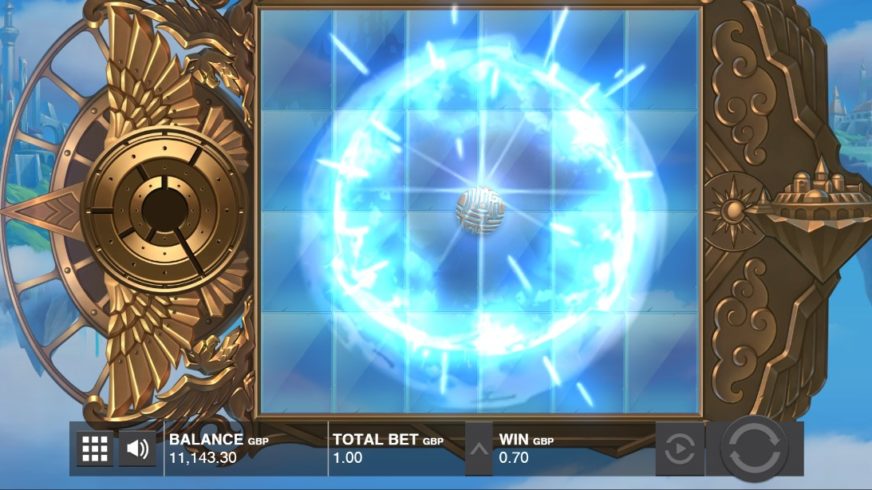 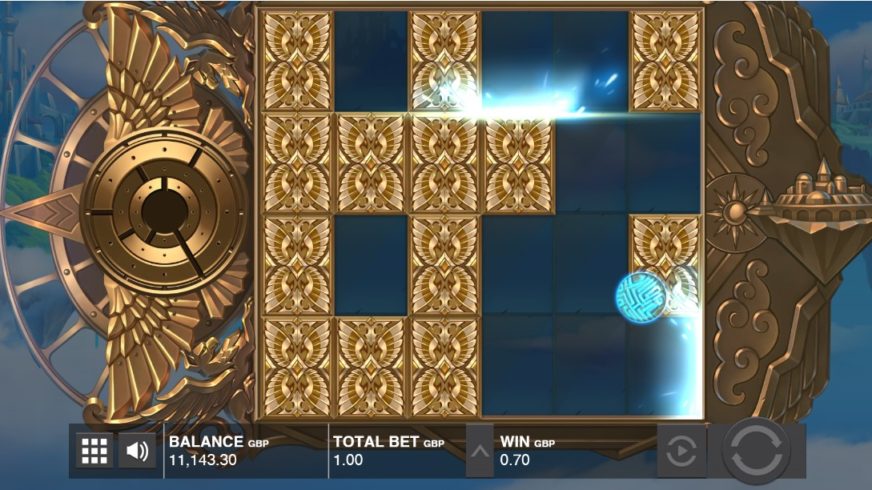 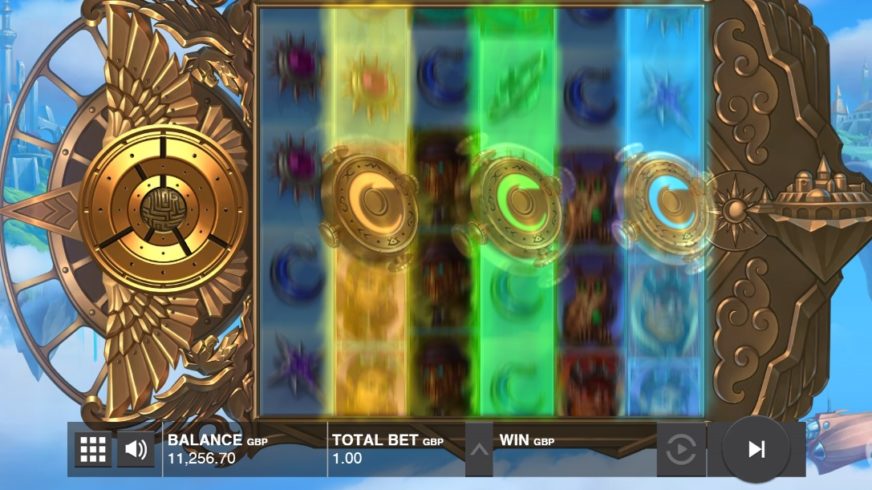 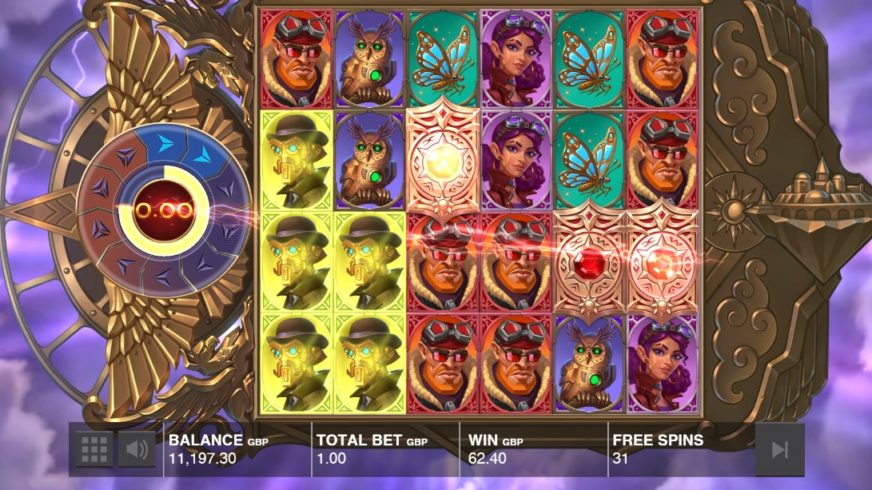 Land of Zenith Reviews by Players