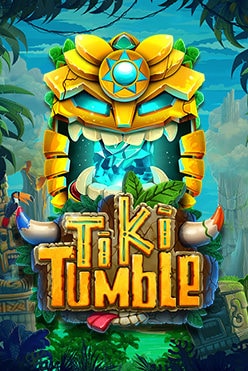 For the supplier of this caliber Razor Shark is a great slot that’s made it to the lobbies of many gambling sites. Razor Shark hit the market on 20.08.2019 offering exciting gameplay and great artwork. You can enjoy free Razor Shark demo mode on clashofslots.com as a visitor with no registration required.

Take a look at the slot metrics to see if that’s the perfect option for you. Razor Shark offers 96.70% return, High volatility and x50000 win potential, max win. With a quite balanced math and the possibility of the massive swings, the game is always engaging. Overall, it provides strong gaming experience.

Razor Shark caters to those who appreciate gameplay that has both traditional and unique elements to it. When no feature gets triggered, the base game is still entertaining but as soon as wilds, scatters or other special symbols or features land on the reels, it gets to the whole new level.

If you love the thrill, then the Razor Shark slot from the developers of Push Gaming is what you need. So grab the scuba gear you need and embark on an exciting deep underwater adventure. There you can experience the real thrill from the swimming sharks and earn good prizes. Technically, the Razor Shark slot is equipped with a 5×4 panel and 20 paylines on which your combinations will be formed. You can play on all devices with a minimum bet of 0.10 euro per spin.

From a design point of view, the Razor Shark slot is made in a cartoon style and looks good and interesting, which, in principle, is the norm for this developer’s games. The panel is located deep in the ocean, next to the reels you will see corals and colorful fish swimming around. In addition, you cannot ignore the rhythmic music that plays throughout the game and adds even more spice. The symbolism of the Razor Shark slot is also made in the corresponding marine theme.

On the reels of the game you will see: scuba, fins, underwater masks, and cameras – they are low pay symbols. Four sharks in blue, green, purple, and orange are the highest pay symbols. The last, orange shark is the highest pay one, and for a combination of five of these images you will receive a win 25 times more than your bet.

The Great White Shark is a wild symbol and replaces all images in the game, except for the scatter (sea mine), and also brings good independent payouts. So, for example, for a combination of five wild symbols, you will receive a win 50 times more than your bet.

In the Razor Shark slot, all features, except for free spins, are linked to each other, so we will tell you about them one by one. The Mystery Stacks feature lies at the core of the game. On any spin, you will see mysterious stacks of 4 symbols that can land anywhere on the reel. When they appear, the Nudge & Reveal feature is activated. Mysterious stacks will then open up and show either winning symbols or golden shark symbols for big wins.

If the Mystery Stacks feature displays golden shark symbols, the Razor Reveal feature is activated. When this happens, each position of the golden shark symbol will display either multipliers, which range from x1 to x2,500, or scatter symbols.

Finally, there is the free spins feature that comes into play when three or more scatter symbols appear on the panel in the main game or during the Razor Reveal feature. Each additional scatter gives you one additional free spin. During these spins, the second and fourth game reels will be filled with mysterious symbols that will move one cell down until they leave the panel. Also, during free spins, each time the mysterious symbols move, the multiplier will increase by one, which is initially equal to x1.

All in all, the Razor Shark is a quality, fun, and profitable slot from the developers of Push Gaming with great graphics and a variety of features, which will be a great addition to this developer’s collection of games. 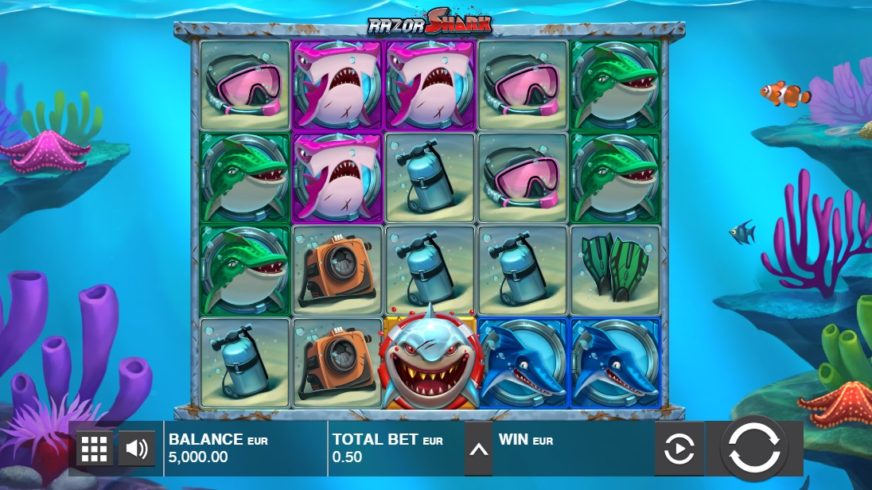 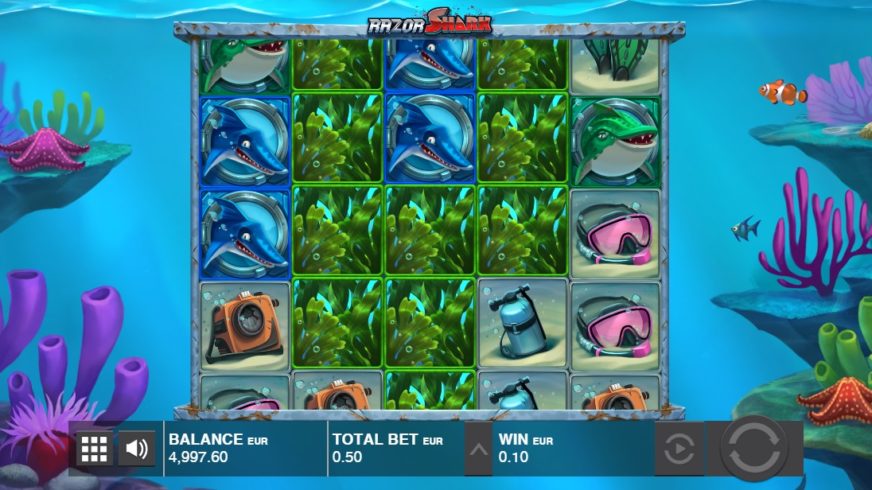 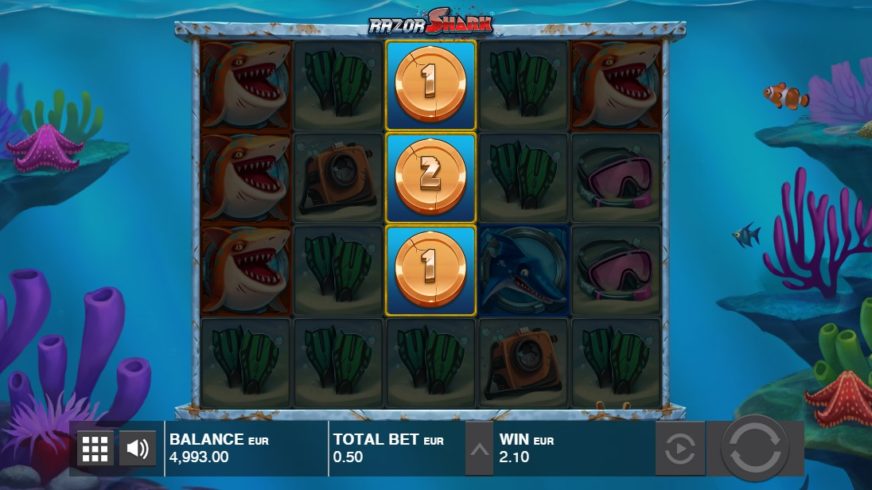 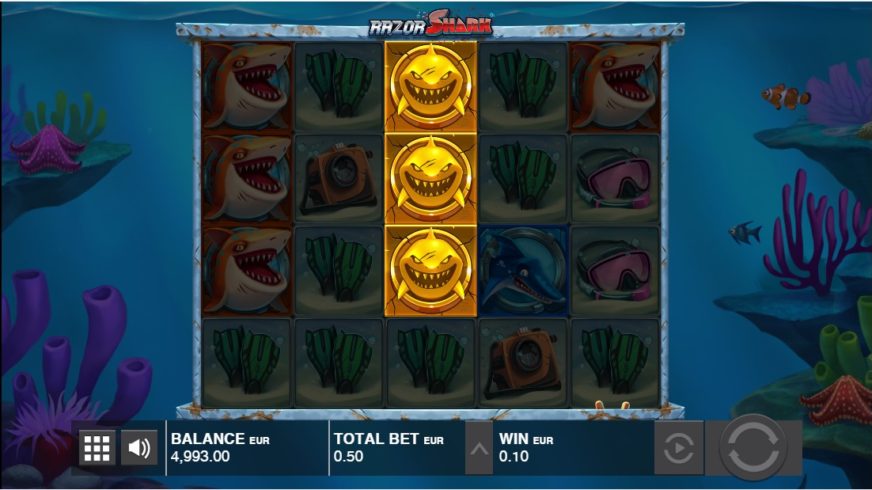 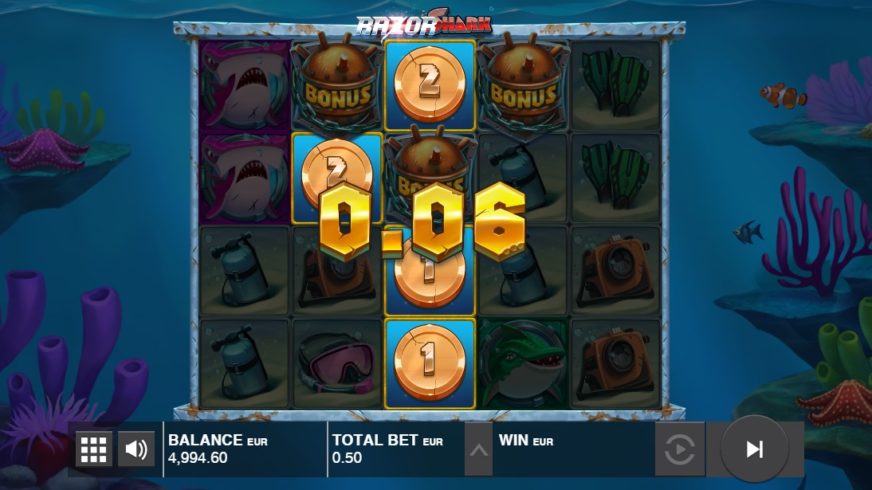 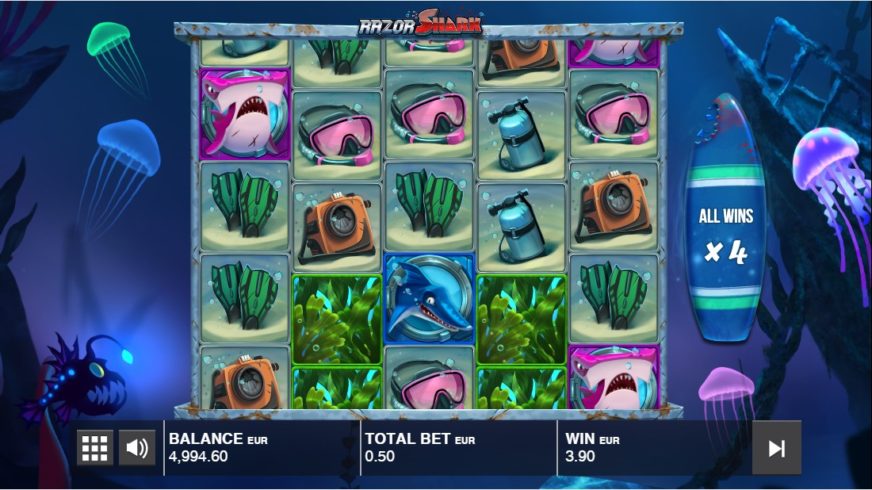 Can I play Razor Shark free slot?
Yes, clashofslots.com is the place to test Razor Shark with no registration required. Any casino site partnering with Push Gaming would also provide free access to the test mode.
Can I win real money on Razor Shark slot?
Yes, registered account with a casino operator would be the only option to play real money Razor Shark and land real winnings.
What is the best place to play Razor Shark?
When it comes to free play any trusted casino or casino related site such as Clash of Slots would be fine. Once real cash gets involved licensed operator with good reputation and premium services must be selected. Best casino would vary depending on one`s personal requirements.
Can I play Razor Shark slot on mobile phone?
Yes, this game is mobile optimized and can be played on any device.
How to win playing Razor Shark?
This is a certified slot machine that generates random outcomes, and all you need is a good luck. Check the paytable to find out how and how much you can win.