Ghost Glyph is the slot developed by renowned studio Quickspin. Released on 08.09.2020 it became popular among slot fans for its exciting engine and fantastic artwork. This review details all of its main characteristics that along with free test mode available on our site give a great idea of experience you’ll be getting.

Playing the Ghost Glyph slot, you will have a sinister adventure in the city inhabited by a variety of ghosts living underground. However, in fact, these ghosts are cute, and most importantly, useful.

The Ghost Glyph slot uses a 7×7 grid, seven reels, seven rows, and the Cluster Pays mechanic. Winning combinations in the slot are formed by 5 or more identical symbols dropped together and connected horizontally or vertically.

You can get meet ghosts and get good prizes with their help on all compatible devices by choosing a bet from $0.20 to $100 per spin. The volatility in Ghost Glyph is between medium and high, and is classified as 4 out of 5. The RTP of Ghost Glyph is 96.18%. The maximum winnings are x2260 of your total bet.

The Tumbling Reels feature is the core of the gameplay. With its help, you can get several winnings in one spin. When you get a winning cluster, the image in it is removed from the grid, and new ones appear in their place.

The Ghost Glyph feature is also related to winning clusters. First, as mentioned above, when creating a cluster, the ghost symbol appears. It acts like a wild. Second, when Glyph Ghost is removed as part of a winning cluster, it takes off to activate one of the Ghost Urns.

The Ghost Urn features – before each spin of the main game, five urns appear above the field. The last one will always be a blue urn (a key). The first 4 urns with ghosts are selected randomly and can be red, yellow, and green with various signs on them. The urns are activated from left to right when the Glyph Ghost participates in the creation of a winning. Here’s what you can get:

The Free Spins feature is activated with a blue urn. After that, you will have access to 8 free spins that will take place in the house. During free spins, each winning cluster will fill the counter above the reels. In order to entirely fill the counter, 8 wins are required. If this happens on the last spin, the Massive Wild will come into play. The counter has 22 of them.

In general, Ghost Glyph is a very interesting slot with various features. Playing it, you will have a great time in the company of ghosts and can get good prizes. 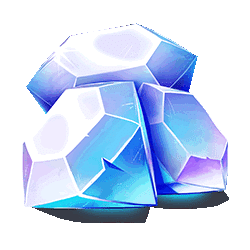 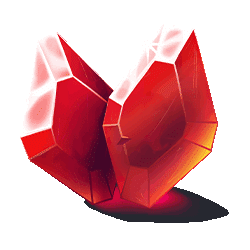 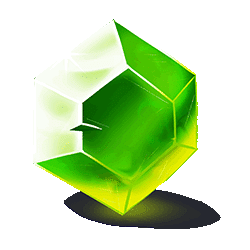 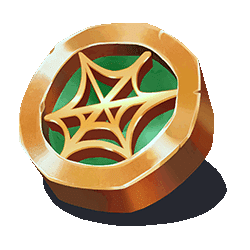 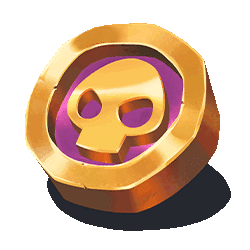 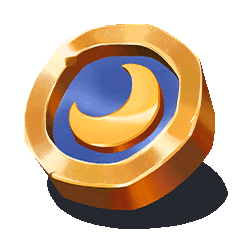 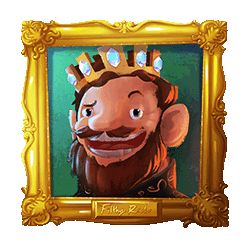 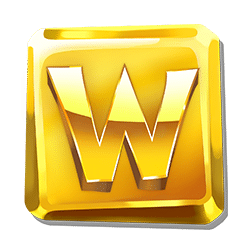 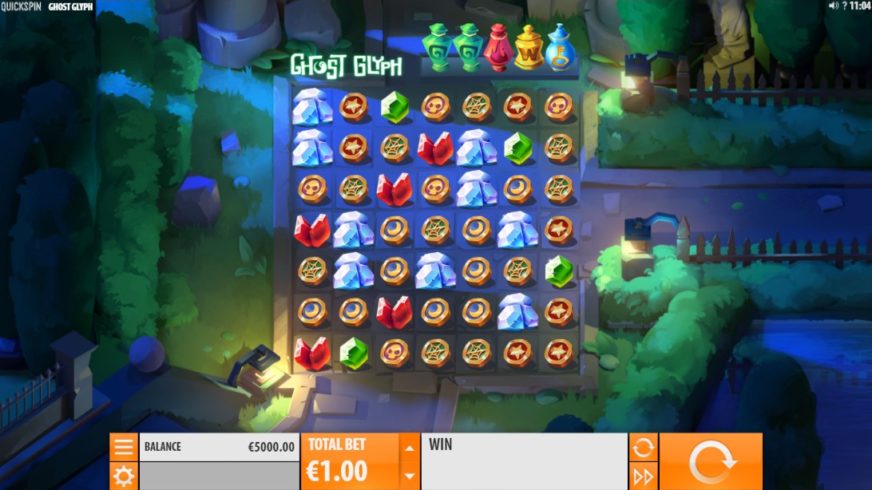 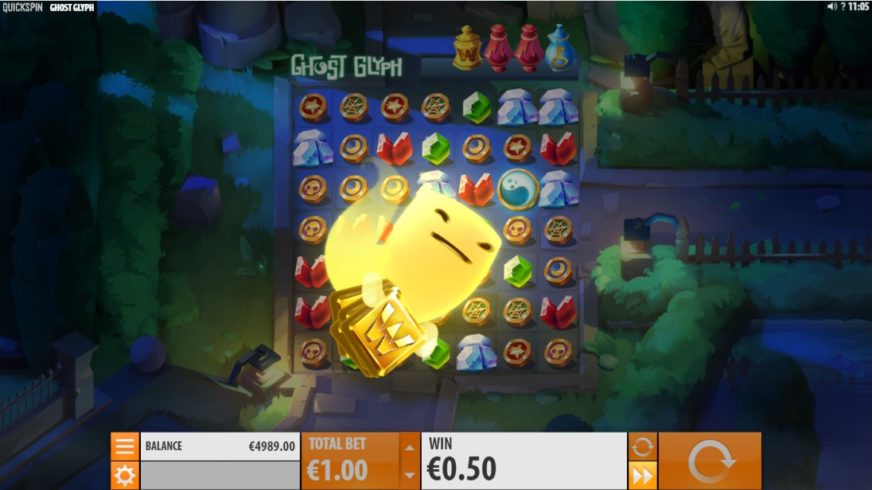 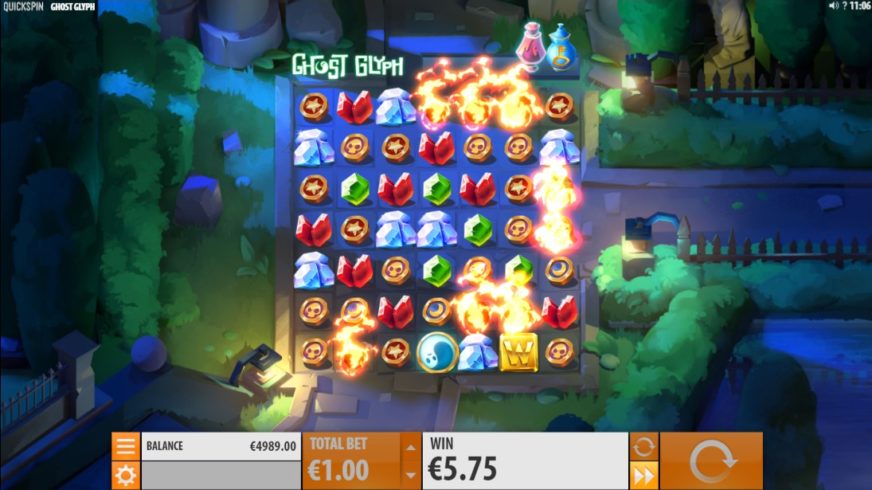 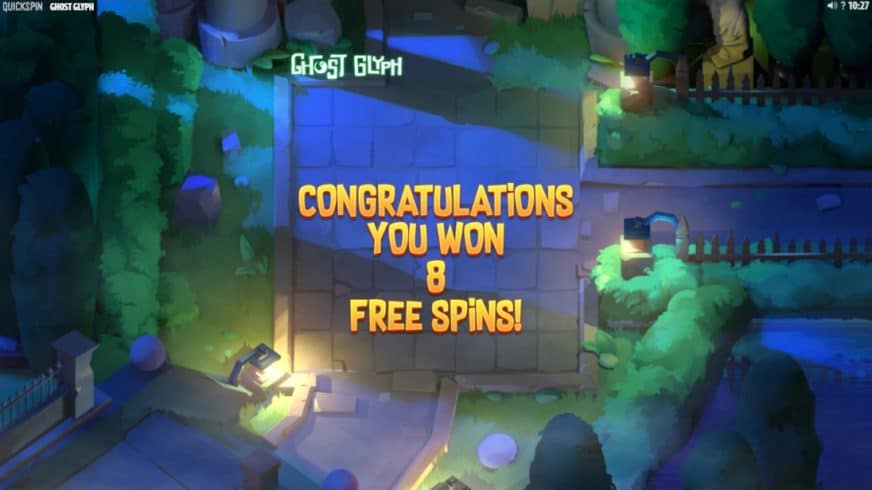 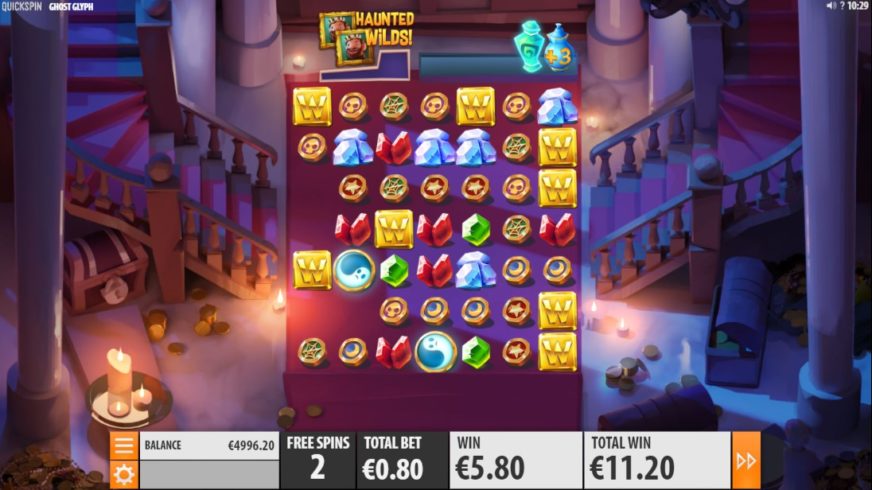 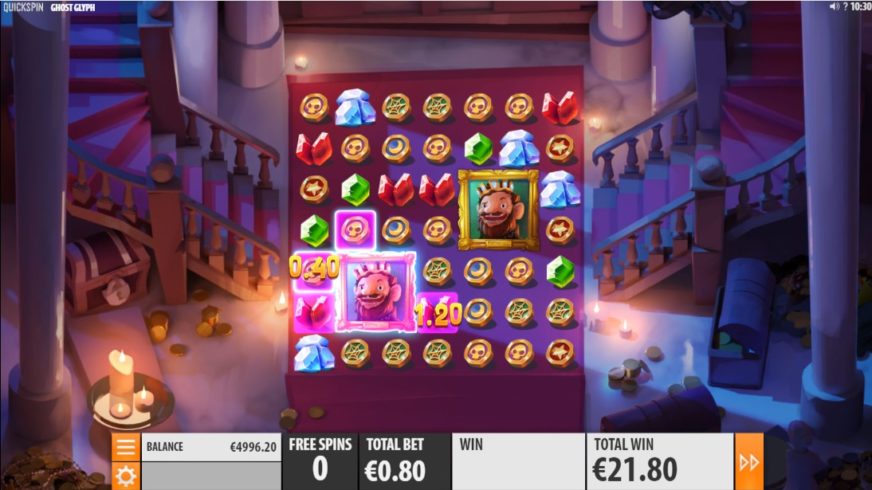 Can I play Ghost Glyph free slot?
Yes, our site is the place to test Ghost Glyph with no registration required. Any gambling site partnering with Quickspin would also offer free access to the demo mode.
Can I win real money on Ghost Glyph slot?
Yes, registered account with a casino operator would be the only option to play real money Ghost Glyph and get real winnings.
What is the best place to play Ghost Glyph?
When it comes to free play any trusted casino or casino related site such as Clash of Slots would be fine. Once real cash gets invested licensed operator with solid reputation and premium services must be selected. Best option would vary depending on one`s personal preferences.
Can I play Ghost Glyph slot on mobile phone?
Yes, this video slot is mobile optimized and can be loaded on any device.
How to win playing Ghost Glyph?
This is a certified video slot that generates random results, and all you need is a good fortune. Check the paytable to learn how and how much you can win.
Top Quickspin Casinos