Hidden Valley is the title developed by renowned studio Quickspin. Released on 14.08.2018 it became a hit among slot fans for its thrilling engine and high-quality artwork. This review explains all of its main characteristics that along with free demo mode available on Clash of Slots give a complete idea of experience you’ll be getting.

Quickspin has announced an update of Hidden Valley, one of the popular slots. The working name of the new game is Hidden Valley.

It is necessary to note that the software of the old game is going to be updated going through major changes. The slot will be fully converted to HTML-5, which will allow to run it on any modern device, including mobile phones or tablets.

In general, it will be the same slot with the ancient Tibetan legend of the lost city of Shangri-La as the theme. Technically, the game has 5 reels with a 3-4-4-4-3 structure and 40 constantly active paylines. The main feature of the game is the multiplayer wild that can reach 10x and depends on the selected bet. Besides, you can activate the free spin bonus game, where each of the three main characters can turn into a wild symbol and complement the winning combinations.

The design of the Hidden Valley slot has not undergone any special changes. The game screen is located in the background of the entrance to the lost city. On the reels, you will see the symbols of the three brave travelers, as well as an eagle, a bull, and standard playing cards. The scatter symbol looks like a shield with the Bonus inscription. It launches the free spins bonus game.

As mentioned above, the main feature of the slot is the random multiplayer wild that can reach 10x and depends on the selected bet. On the right side of the game screen, you will see a column with the available bets and the maximum and minimum multipliers. At the first level (minimum), you get the following structure:

Now, with each spin, pay attention to the right column of the game screen with the name (wild), where the wild symbol multiplier that is present in the winning combination will be randomly selected.

The free spin feature is activated in case of three shields appearing on the second, third, and fourth game reels. You will be moved to the gates of the lost city, to the castle. It has two spinning zones. The first zone determines which of the main symbols will be wild. In the second zone you can win from 6 to 12 free spins. During the free spin feature, pay attention to the scatter symbols that appear. Two shields will activate a pic-me, where an additional wild symbol or an additional spin will be hidden behind the shields.

In general, when playing the Hidden Valley slot, you will not see any special changes. However, the updated software will enable you to play your favorite slot from any device. 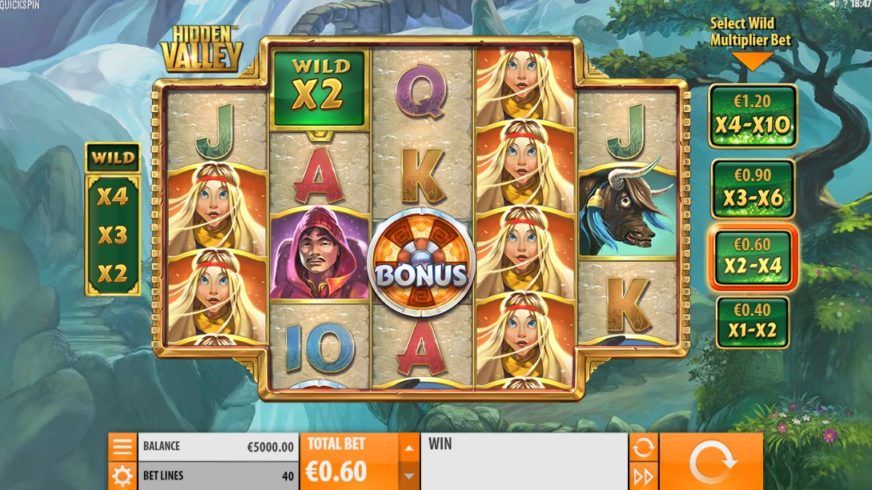 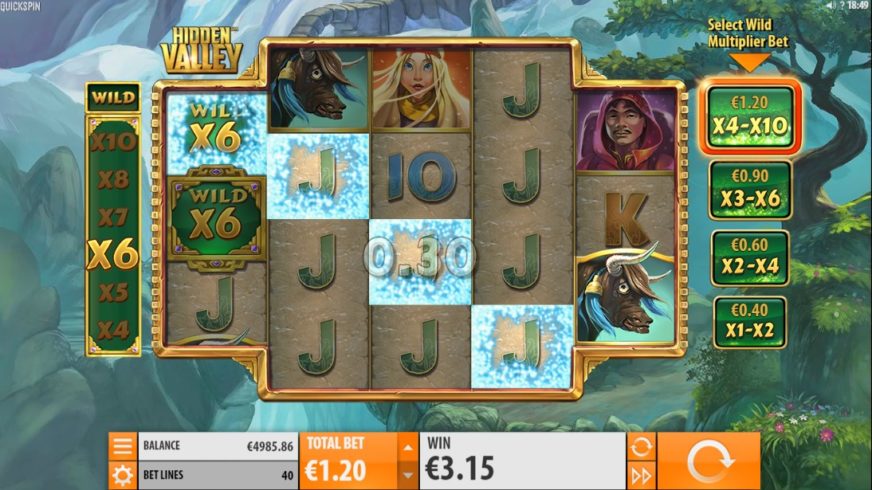 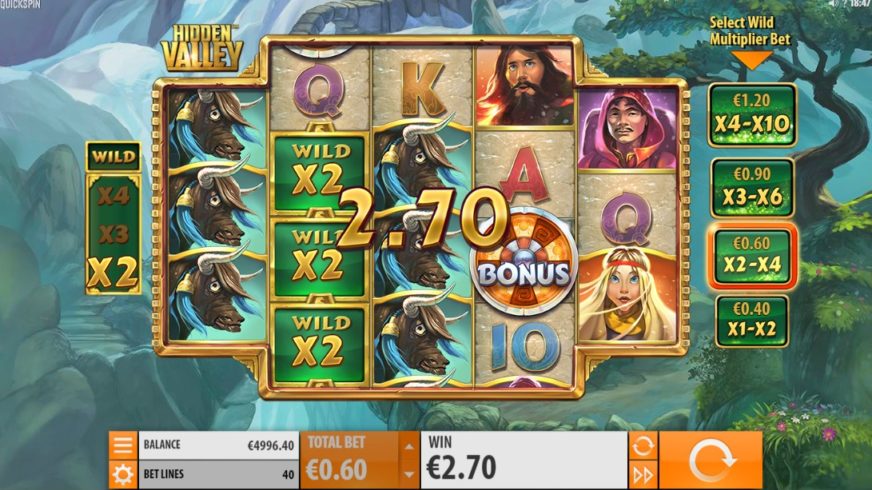 Can I play Hidden Valley free slot?
Yes, Clash of Slots is the place to play demo Hidden Valley with no registration required. Any casino site partnering with Quickspin would also give free access to the test mode.
Can I win real money on Hidden Valley slot?
Yes, registered account with a gambling site would be the only option to enjoy real money Hidden Valley and land real winnings.
What is the best place to play Hidden Valley?
When it comes to free play any trusted gambling operator or casino related site such as clashofslots.com would be fine. Once real cash gets involved licensed operator with good reputation and premium services must be selected. Best option would vary depending on one`s personal preferences.
Can I play Hidden Valley slot on mobile phone?
Yes, this slot machine is mobile optimized and can be played on any device.
How to win playing Hidden Valley?
This is a licensed game that generates random results, and all you need is a good luck. Look through the paytable to find out how and how much you can win.