The Rift is the game developed by well known studio Thunderkick. Released on 04.05.2016 it became a hit among players for its thrilling engine and fantastic artwork. This review describes all of its key characteristics that along with free demo mode available on clashofslots.com give a great idea of experience you’ll be getting.

The design of The Rift slot is excellent. You will find yourself in the middle of a mysterious dark street, in which a huge crevice has formed right on the sidewalk and now bright pink light is oozing from it. The Rift slot has five reels and 17 pay lines. The slot has an unusual theme and provides a good set of bonus features.

Behind the reels, a stone wall is visible with some kind of mystical symbol; perhaps it had made the crevice. The symbols in the slot are also quite unusual; you will see four coins with symbols depicted on them, some green liquid in a bottle, an octopus, an old pocket watch, and a book of spells. Special symbols include the wild, which helps to form combinations by replacing missing symbols in the slot. The Bonus symbol is the slot logo with the writing «free spin»; it activates free spins.

Bonus Features of The Rift Slot

Rift Spin is activated when two scatter symbols appear on the reels. You will get one spin, during which wild symbols that did not participate in a winning combination will become sticky, and one to three additional wild symbols will be added to the play field. This will undoubtedly increase your chances of getting a good combination.

In general, The Rift from Thunderkick is a rather interesting and unusual slot that will surely attract the attention of the users.

The Rift Symbols and Paytable 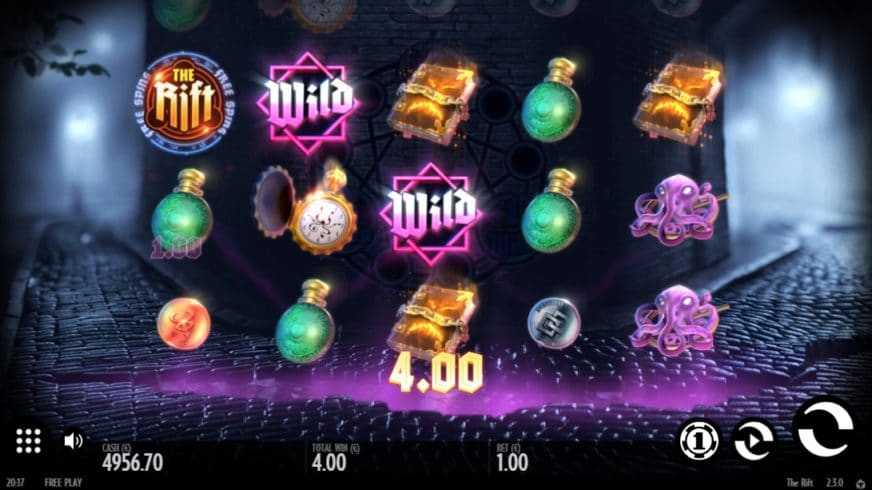 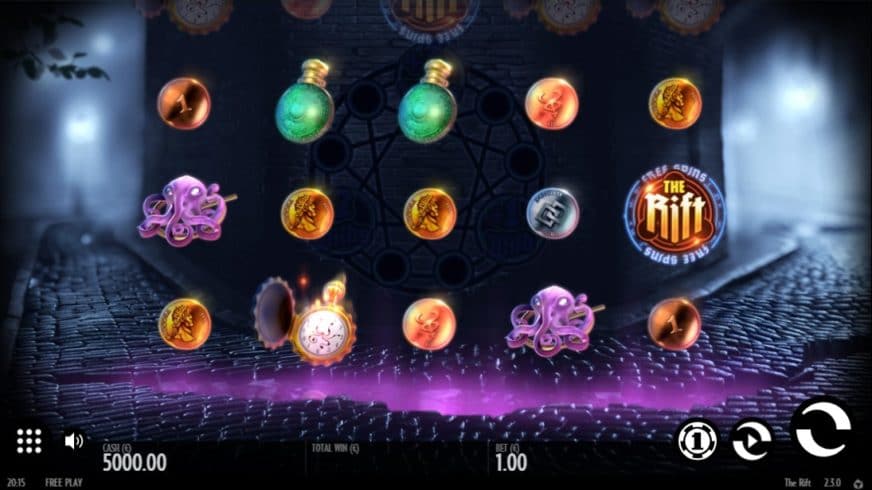 Can I play The Rift for free?
Yes, clashofslots.com is the place to try The Rift with no registration required. Any gambling site partnering with Thunderkick would also give free access to the test mode.
Can I win real money on The Rift slot?
Yes, registered account with a casino operator would be the only option to play real money The Rift and land real winnings.
What is the best place to play The Rift?
When it comes to demo mode any trusted casino or casino related site such as clashofslots.com would be fine. Once real money gets involved legitimate operator with good reputation and top tier services must be selected. Best option would vary depending on one`s personal requirements.
Can I play The Rift slot on mobile phone?
Yes, this slot is mobile optimized and can be loaded on any device.
How to win playing The Rift?
This is a certified slot machine that generates random outcomes, and all you need is a good luck. Look through the paytable to find out how and how much you can win.

The Rift Reviews by Players