Take a look at the slot metrics to decide if that’s the best option for you. Midas Golden Touch offers 96.1% return, High volatility and x10100 win potential, max win. With a pretty balanced math model and the possibility of the big swings, the game is always thrilling. Overall, it provides enjoyable gaming experience.

Midas Golden Touch caters to those who appreciate gameplay that has both classic and unique elements to it. When no bonus gets activated, the base mode is still entertaining but once wilds, scatters or other special symbols or features appear on the screen, it gets to the whole new level.

According to the legend, King Midas, who ruled Phrygia, helped the lost teacher of Dionysus, Silenus, long ago. As a result, Dionysus was so glad that his teacher was found alive and well that he offered Midas to reward him with some kind of gift. As King Midas was very greedy for gold and wealth, he wished that everything he touched would turn into gold. However, the joy was short-lived – Midas realized that this way he would not even be able to eat and would die. Finally, he went to Dionysus and begged him to take this gift back. This is the story that Thunderkick used to develop its slot called Midas Golden Touch.

Like all Thunderkick games, the Midas Golden Touch slot visually looks great. Once you launch the slot, you will find yourself in the palace where greedy Midas lived. This is where the playing field is located, surrounded by huge stone columns. In technical terms, Midas Golden Touch has 5 reels and 15 paylines. You can play it on any compatible device, with a minimum bet of just $0.10 per spin.

You will see the names of playing cards from 9 to A, chests of gold, bowls, and of course King Midas himself among the symbols. Magic hands of Midas is a wild symbol, it pays for itself, replaces simple symbols in the slot if necessary, and also brings multipliers. The gate to the King’s castle is a scatter symbol, which triggers the free spins feature.

As was said before, the wild can bring multipliers that depend on the number of wild symbols involved in a winning combination. For example:

The Free spins feature requires to collect 3, 4, or 5 scatter symbols in order to activate the free spins round. Once that happens, you can count on 10, 15, or 20 free spins, respectively. The Sticky Respin feature will be active during the free spins and is triggered every time you get a winning combination. The symbols that participate in the combination are fixed in place, and the rest are replaced with new ones. This continues until the desired symbols are added to your combination.

Another advantage during the free spins round is that a wild symbol will be added to a randomly selected slot on reels 2, 3, or 4 every time you spin on the playing field. Pay attention to the three slots located under the reels as well: when a scatter symbol appears during respins, it will be moved to one of the slots, and you will receive additional free spins once all three of them fill up.

Overall, the Midas Golden Touch slot looks nice and of high quality, like all the games by Thunderkick. There is an interesting plot in the slot, as well as a profitable round of free spins, which will surely bring you closer to the coveted win. 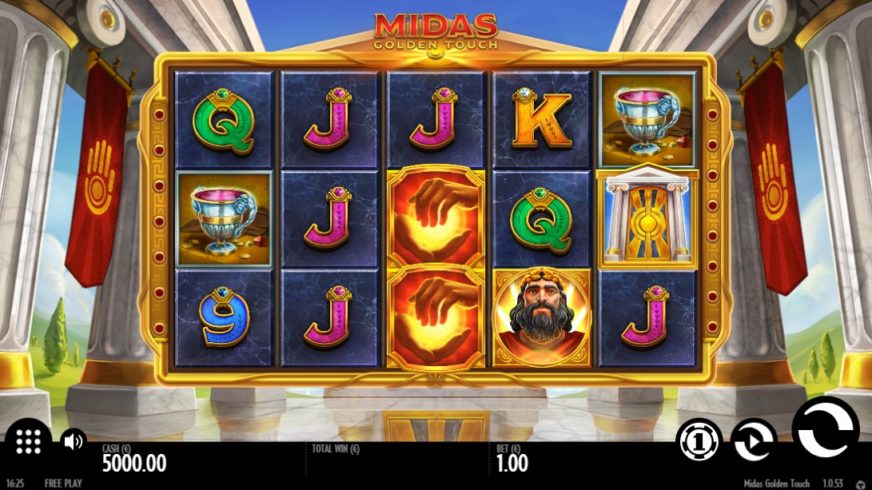 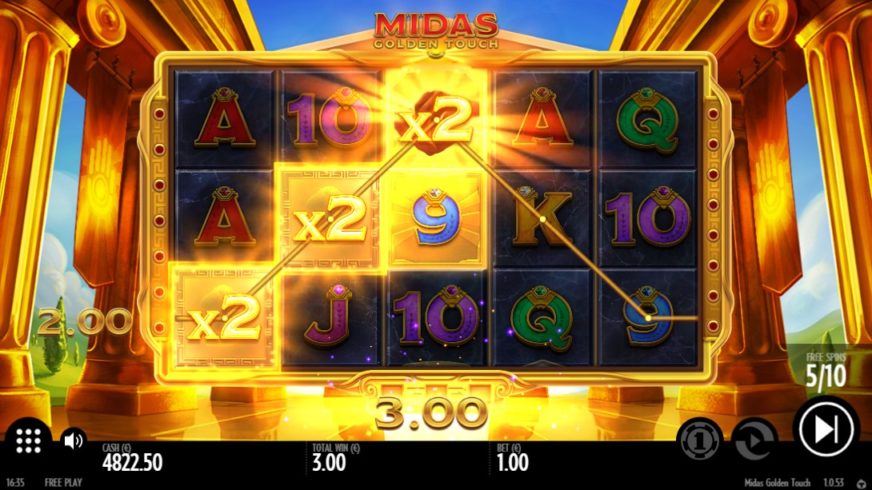 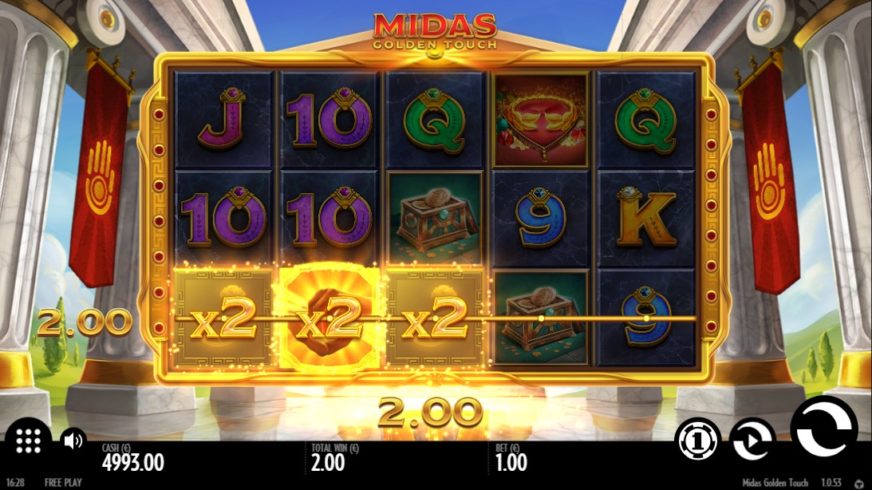 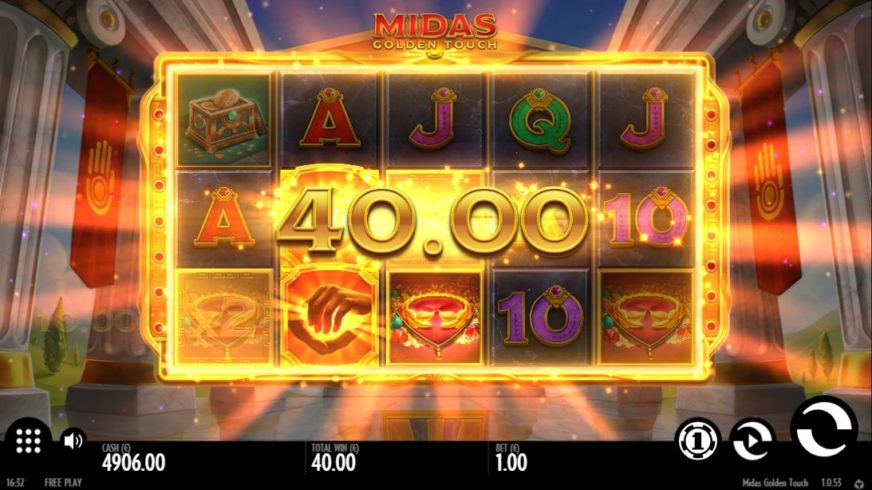 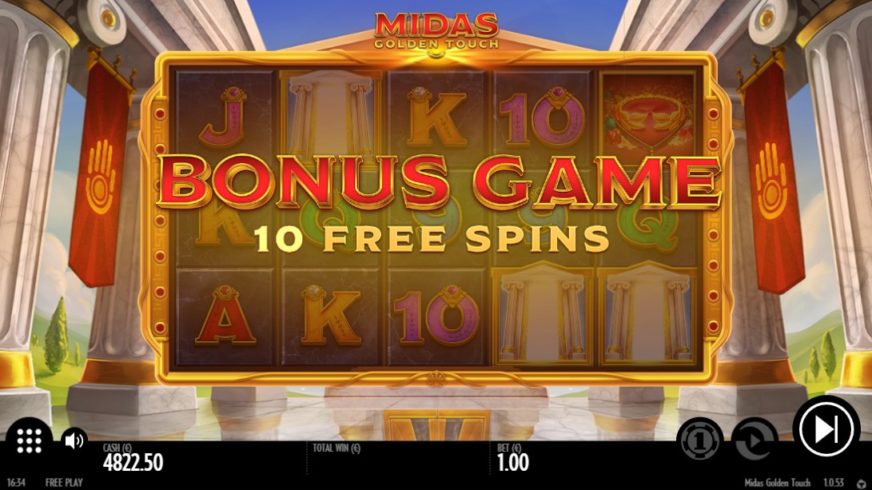 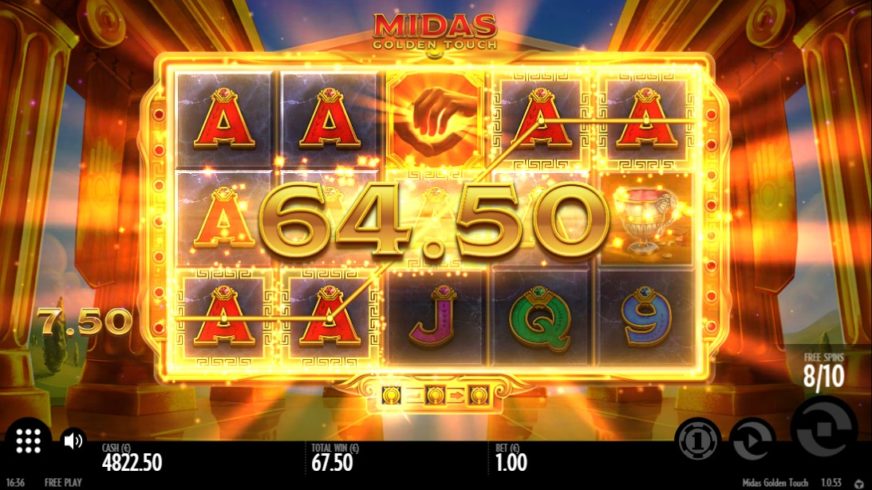