Raven’s Eye is the slot developed by well known studio Thunderkick. Released on 19.06.2019 it became a hit among slot fans for its immersive engine and fantastic artwork. This review explains all of its main characteristics that along with free demo mode available on our site give a great idea of experience you’ll be getting.

Raven’s Eye is another game in the Thunderkick portfolio with a fantastic theme, where the main character is a druid priestess. In terms of graphics, this slot is typical of the Celtic civilization. In technical terms, Raven’s Eye has 5 reels, 4 rows of symbols and 30 paylines. This slot can be played on any compatible device with a minimum bet of $0.10 per spin.

Visually, the Raven’s Eye slot looks colorful and magical – the game reels are located in an ancient crypt against the backdrop of a mysterious forest. Fireflies flying behind the playing field and birds singing in the background perfectly complement the idea of ​​the developers and bring even more magic into the game. You will see 10 thematic symbols on the reels, including the names of playing cards from 10 to A, images of the 4 elements: fire, earth, air, and water, as well as the main character of the slot – the priestess of the druids.

It is the highest paying symbol in this game and can pay 12.5 times your bet for a combination of 5. The wild symbol (luminous letter W) is of the same value – in addition to independent wins, the wild symbol serves to replace all images in the game except for the raven, which is both a mystery and a scatter symbol.

The Thunderkick developers have implemented two interesting features in the Raven’s Eye slot, which are triggered when a raven lands on the reels. The first feature is Raven Mystery Symbols, it is triggered when the raven symbols appear anywhere on the game screen, after which all its images turn into one set of randomly selected symbols.

The second feature is called Bonus Game and is presented in the form of free spins with interesting features. This feature is also associated with the raven symbol – it is triggered if the raven lands on three or more game reels and fills them completely. Initially, 10 free spins will be available to you, but their total number depends only on your luck. Pay attention to the two counters located on both sides of the playing field: the left counter helps you increase your free spins.

This happens when a raven with a fire sphere appears on the playing field. The sphere will be moved to the left counter, after which you will see 3 additional spins displayed on the counter on the right. A symbol will also be selected as additional, mystery during this feature. Please note that you will be able to turn all card names into mystery symbols, and you can count on decent prizes, if this happens.

In conclusion, it can be said that the Thunderkick developers have once again proved their skills in creating high-quality slots. You will find an unlimited number of free spins with mystery symbols when playing the Raven’s Eye slot, and of course good prizes. 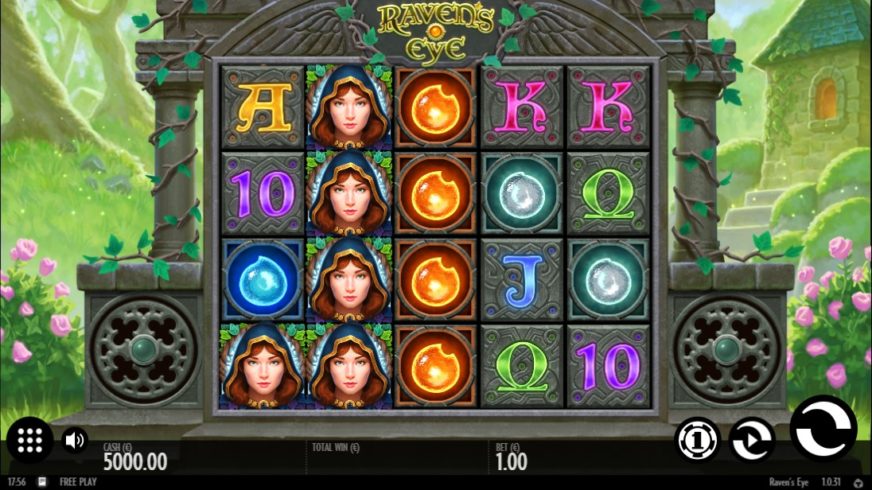 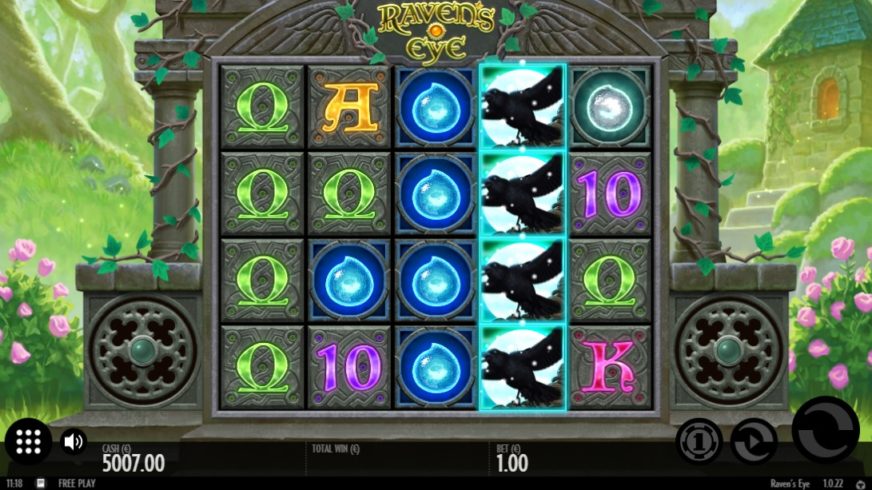 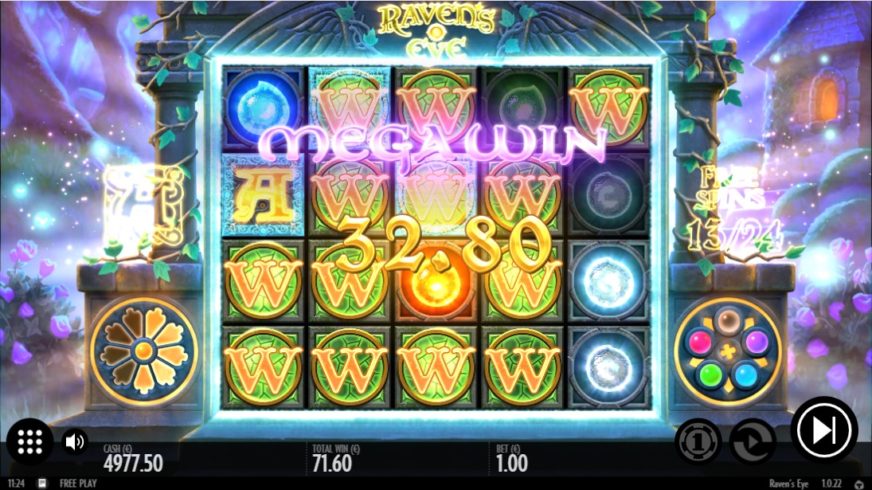 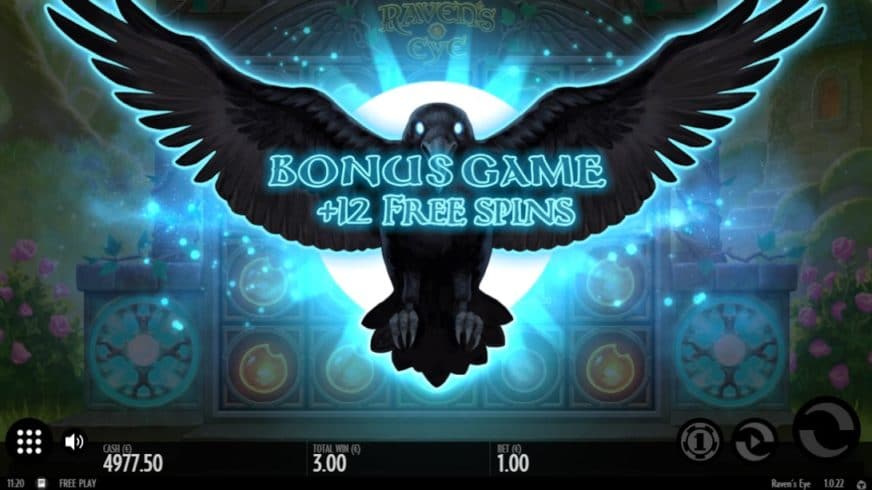 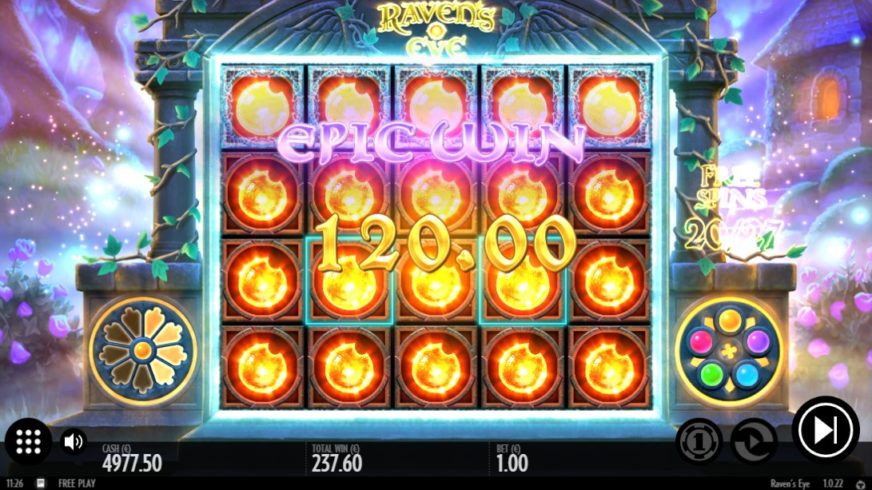 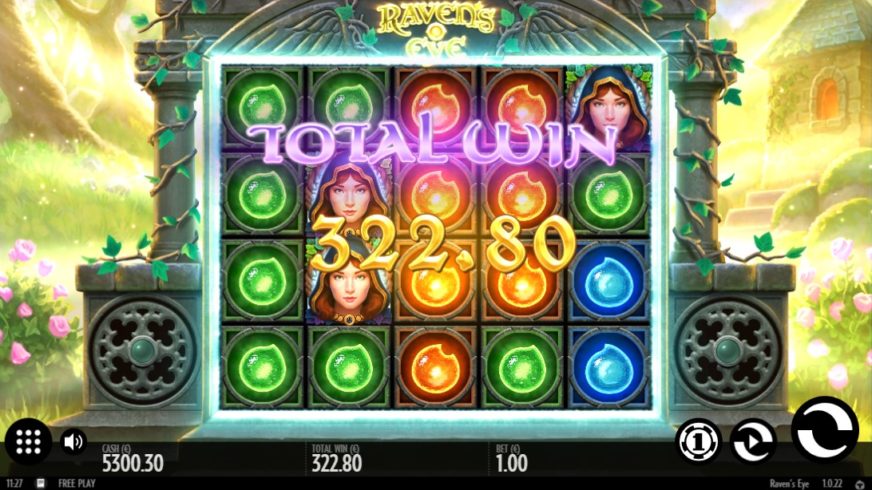 Can I play Raven’s Eye free slot?
Yes, Clash of Slots is the place to play demo Raven’s Eye with no sign up required. Any gambling site partnering with Thunderkick would also provide free access to the test mode.
Can I win real money on Raven’s Eye slot?
Yes, registered account with a gambling site would be the only option to enjoy real money Raven’s Eye and land real winnings.
What is the best place to play Raven’s Eye?
When it comes to demo mode any trusted casino or casino related site such as clashofslots.com would be fine. Once real cash gets involved licensed operator with good reputation and top tier services must be selected. Best casino would vary depending on one`s personal preferences.
Can I play Raven’s Eye slot on mobile phone?
Yes, this title is mobile optimized and can be played on any device.
How to win playing Raven’s Eye?
This is a certified game that generates random outcomes, and all you need is a good fortune. Look through the paytable to see how and how much you can win.