Hercules and Pegasus is the slot developed by recognized studio Pragmatic Play. Released on 11.11.2019 it became an instant success among players for its exciting engine and high-quality artwork. This review details all of its key characteristics that along with free demo mode available on our site give a good idea of experience you’ll be getting.

Of course, many of you have seen and heard a large number of cartoons and stories about Hercules. By the way, there are many other slots with the participation of this hero in the online world. So who is Hercules? He had incredible physical strength and courage from birth, which eventually helped him to defeat lots of enemies. But he would have hardly coped without his faithful horse Pegasus, which could fly. Now Pragmatic Play decided to use this heroic couple in its slot called Hercules & Pegasus, which is described below.

The design of the Hercules & Pegasus slot looks high-quality and interesting. The playing field is located high in the sky, which is not surprising, because Mount Olympus, where all the Gods lived, was under the very clouds. On the technical part, Hercules &Pegasus slot is equipped with 5 reels and 20 lines to form your winnings. The Hercules & Pegasus slot can be played on any compatible device with a minimum bet of just $0.20 per spin.

As for the symbols, the playing field features beautifully designed card names from 10 to A, as well as vases, golden harps, ancient Greek temples, and the Hercules & Pegasus logo. The image with Hercules & Pegasus in one picture is a wild symbol used to replace the above images. There are also 3 scatters in the game: lightning appears on reels 1 and 3, while Hercules and Pegasus can only land on reel 5.

Hercules can fly to the playing field riding Pegasus during the main gameplay – if this happens, 3 scrolls will appear in front of you; you will need to select one in order to find out which of the features you get. This could be:

There are 3 free spins options in the Hercules & Pegasus slot. Each of them is triggered by the certain symbols appearing on the playing field.

In conclusion, it can be said that Hercules & Pegasus is a great slot, playing which you will find a large number of different features, familiar characters, and, of course, good prizes.

Hercules and Pegasus Symbols and Paytable 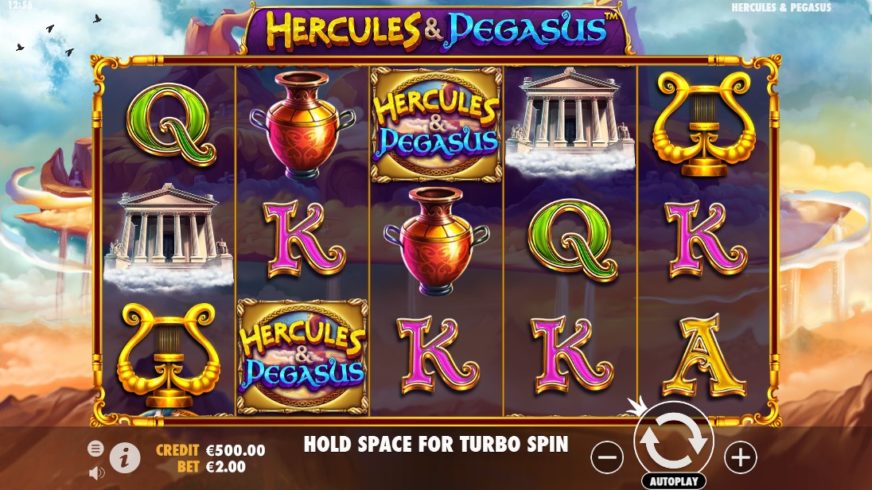 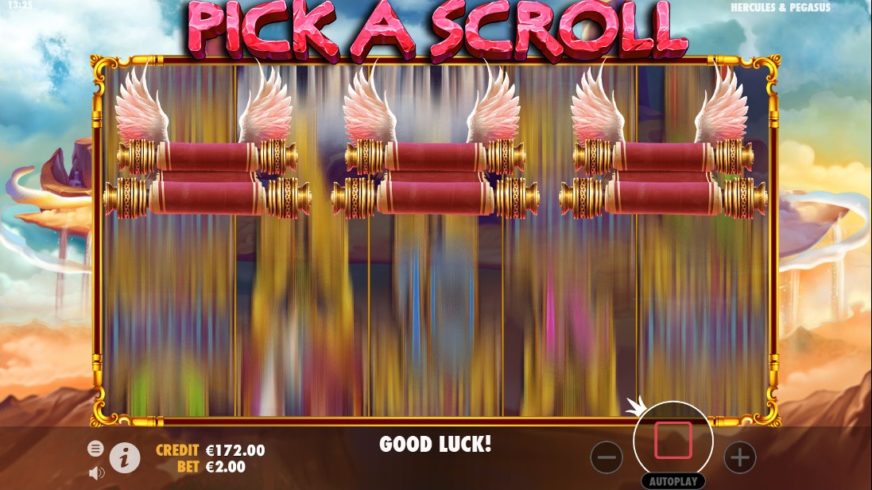 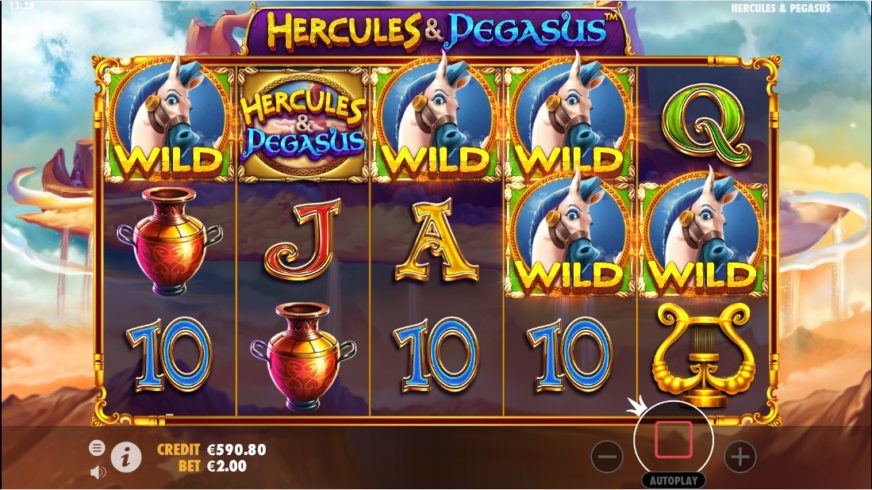 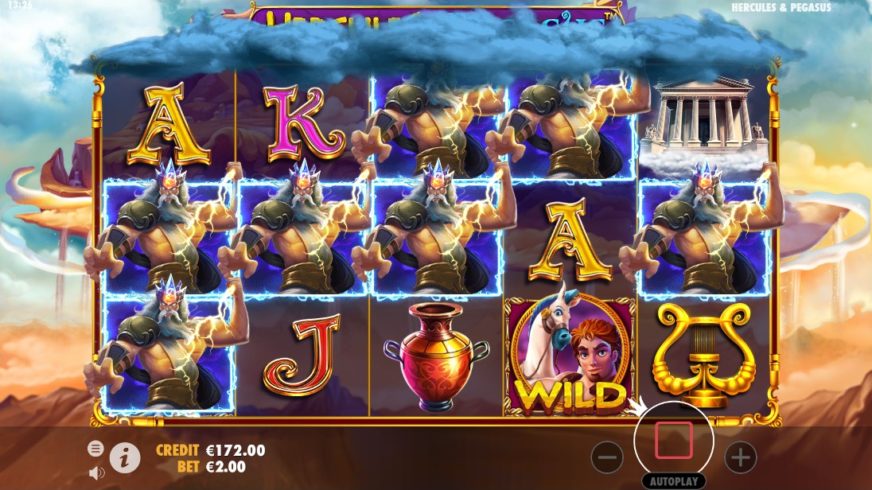 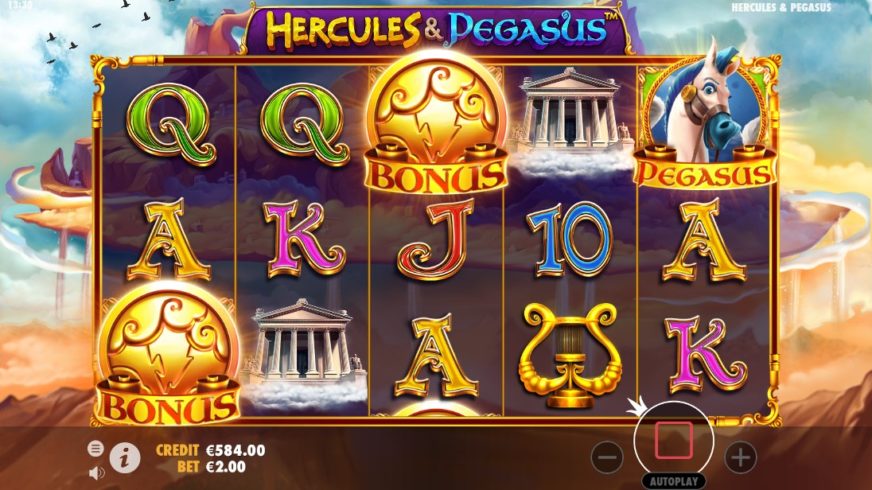 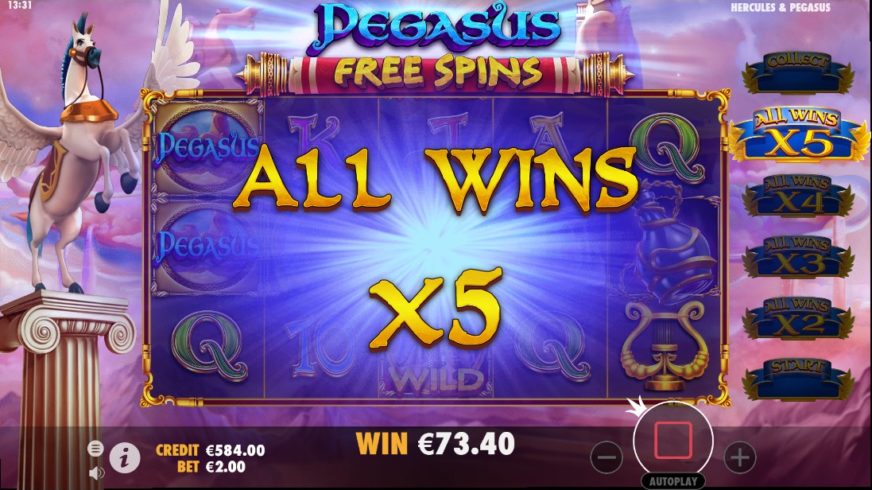 Hercules and Pegasus Reviews by Players